As rapid economic expansion continues to shape the Asian landscape on which many species depend, time is running out for conservationists aiming to save wildlife such as tigers and leopards. Scientists at the Smithsonian Conservation Biology Institute have used genetic analysis to find that the natural forest corridors in India are essential to ensuring a future for these species. According to two studies recently published in two papers, these corridors are successfully connecting populations of tigers and leopards to ensure genetic diversity and gene flow. The results of the study that focused on tigers were published in Ecology and Evolution, and the results from the study that tracked leopards were published in Diversity and Distributions.

"This research provides crucial information about the need to maintain these vital veins to support tiger and leopard populations," said Sandeep Sharma, SCBI visiting scholar and lead author of the Ecology and Evolution paper. "These habitats and corridors in India are threatened by infrastructural developments and need to be conserved if we want to save these species for future generations."

Habitat fragmentation can divide populations of species into isolated groups, which can lead to inbreeding and a genetic bottleneck that affects the long-term viability of the population. Scientists can determine the scope of such isolation by analyzing the extent to which groups of the same species from one range have become genetically distinct. The authors of the two papers used fecal samples to analyze the genetics of tiger and leopard populations in four reserves in central India: Satpura, Melghat, Pench, and Kanha. The Kanha and Pench reserves and the Satpura and Melghat reserves are connected via forest corridors that tigers, leopards, humans, and cattle share. The researchers found that both tiger and leopard populations in the reserves had maintained a high level of genetic diversity. Neither tigers nor leopards were genetically distinct, with one exception among the leopards, which the scientists hope to explain with additional research. The corridors appear to allow individuals to move between reserves, facilitating genetic exchange.

However, the proliferation of roads, rail lines, mining, urbanization and other forms of development through the corridors jeopardize these species' ability to move between reserves. Several coal mines have been proposed in the forest corridor between the Satpura and Pench tiger reserves, as has the widening of a national highway (NH-7) and a broad-gauge railway line that cut across the corridor between the Kanha and Pench tiger reserves.

"By looking at two species, we were really able to illustrate the functionality of these corridors," said Trishna Dutta, SCBI visiting student and lead author of the Diversity and Distributions paper. "Conserving a whole landscape, rather than piecemeal protected areas, would ensure a better chance for the long-term persistence of these and other species."

The Indian subcontinent contains the largest number of tiger conservation areas, which are home to 60 percent of the world's wild tigers. Leopard range has historically extended through most of sub-Saharan Africa, along parts of the North African coast, through central, south and southeast Asia and north to the Amur River valley in Russia.

In addition to Sharma and Dutta, the papers' other SCBI authors are Jess Maldonado, a research geneticist at SCBI's Center for Conservation and Evolutionary Genetics, and John Seidensticker, head of SCBI's Conservation Ecology Center. The other authors are Thomas Wood in the Department of Environmental Science and Policy at George Mason University and H.S. Panwar, former director of Project Tiger India and Wildlife Institute of India. 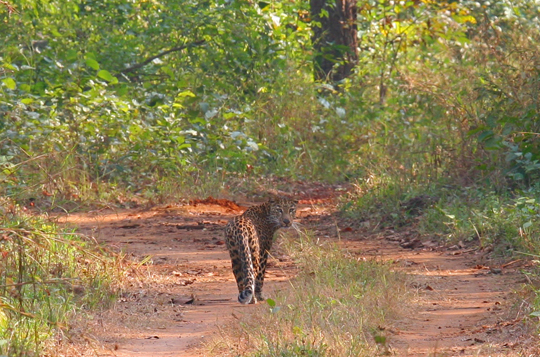