The High-Tech Sampling Is as Effective as Traditional Scientific Surveys
Apr. 23, 2019

Wood turtles are endangered and can be difficult to find in the wild because of their cryptic nature and frequently small populations, but scientists from the Smithsonian Conservation Biology Institute (SCBI) found that environmental DNA (eDNA) can be used to find them much faster. Their results from surveying wood turtles in Virginia, the first time the method has been used for turtles in the state, were published today, April 24, in PLOS ONE.

“It can take years to become good at finding wood turtles,” said Tom Akre, conservation ecologist at SCBI and lead author of the paper. “It can also be expensive to train researchers and managers to find them. Surveys that use eDNA will make finding these turtles much easier and cheaper. It could eventually allow us to track the distribution status of these turtles in real time.”

Scientists sampled water from 37 streams in and beyond the known distribution of wood turtles across Virginia to test for any traces of DNA. They used an extremely sensitive filter to look for DNA fragments left from turtles defecating, urinating, shedding skin secretions or fertilizing eggs. SCBI’s Center for Genomics picked out small fragments of wood turtle DNA from the water samples and found wood turtles in 17 of those streams.

Wood turtles are endangered due to poaching for the pet trade and rapid human encroachment of their habitats. If scientists can use eDNA to monitor where wood turtles are living, they can more easily protect them and quickly act if they are disappearing from their habitats across North America, which is critical. In the past 50 years, which is less than a wood turtle’s lifetime, they have lost 30% to 40% of their range in Virginia alone.

Wood turtles range across North America and are classified as “endangered” by the International Union for Conservation of Nature. The turtles live on land from April to October and in streams during the winter. Despite their small size, about the size of a football, they can cover distances of up to 20 kilometers in a season. 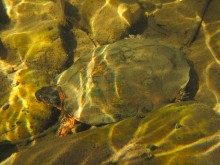