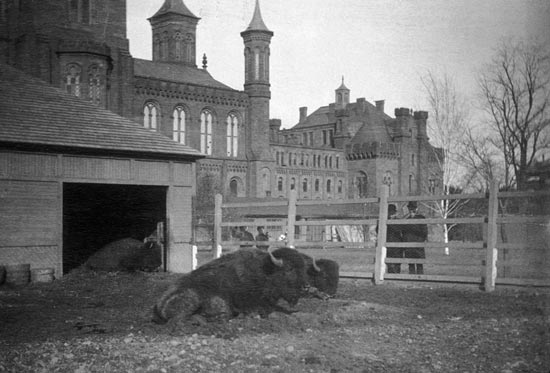 The Smithsonian's National Zoo and Conservation Biology Institute began as the dream of William Temple Hornaday, chief taxidermist at the Smithsonian from 1882 to 1887. During a trip to the western United States in 1886, he was shocked and troubled by what he didn’t find—large herds of American bison. The species, which once roamed the American West by the millions, was reduced to a few hundred animals. The bison’s near extinction sparked Hornaday’s crusade to save it and other endangered species from disappearing completely. He became the first head of the Department of Living Animals at the Smithsonian later that year, and brought 15 North American species to live on the National Mall in Washington, D.C. The deer, foxes, prairie dogs, badgers, lynx and bison were the animals that started what would eventually become the National Zoological Park.

In 1889 President Grover Cleveland officially signed an act of congress into law creating the National Zoological Park for “the advancement of science and the instruction and recreation of the people.” Two years later, the animals who had been living on the National Mall had a new home. Frederick Law Olmsted, the premiere architect of the day, designed the Zoo within Rock Creek Park in northwest Washington, D.C., which officially opened in 1891. 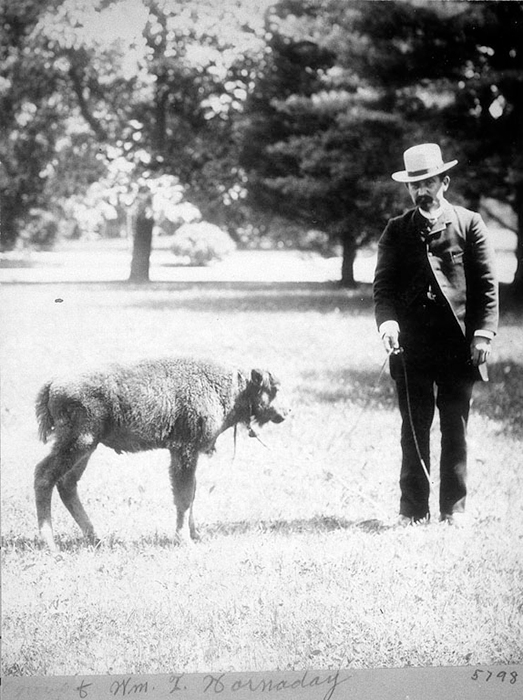 The Zoo has continued its legacy of saving species started by Hornaday throughout its more than 130-year history. By the 1950s it was emerging as a leader in animal care and conservation science, and hired its first full-time veterinarian. The second half of the 20th century continued to bring conservation science breakthroughs at the Zoo. A research center dedicated to studying animal reproduction, behavior and ecology opened in 1965. A decade later, the Zoo expanded significantly when the Conservation Research Center (now the Smithsonian Conservation Biology Institute) was founded. The non-public, 3,200-acre research facility in Front Royal, Virginia, became the headquarters for scientists studying endangered species and their habitats. Today, the combined initiatives are collectively known as the Smithsonian’s National Zoo and Conservation Biology Institute.

Since its founding, the Zoo and the Smithsonian Conservation Biology Institute (SCBI), has celebrated many milestones, from endangered species births, to reintroductions to the wild, to revolutionary scientific studies. One of the most public-facing of these was the arrival in 1972 of Ling Ling and Hsing Hsing, the Zoo's first giant pandas, that launched an on-going international collaboration with Chinese scientists to better understand and save the critically endangered bears. During the 1970s, SCBI welcomed the first of many mammal and bird births at its facility, including red pandas, clouded leopards, onagers, Guam rails, white-naped cranes and Micronesian kingfishers. 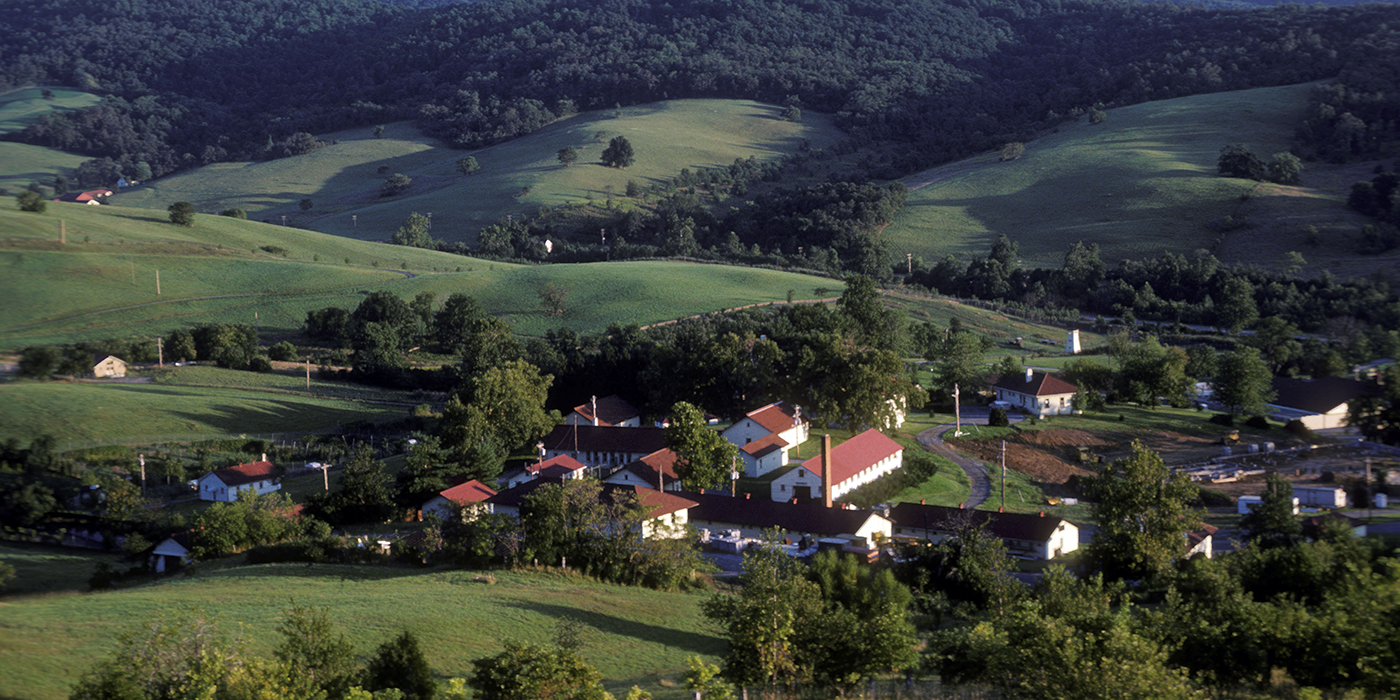 During the 1980s and 90s scientists began reintroducing animals born at the Zoo and SCBI to the wild. In the mid-1980s SCBI scientists developed the basis for breeding animals in human care to preserve as much genetic diversity as possible. Golden lion tamarins, an endangered species, free-ranged at the Zoo from 1986 to 2007, in preparation for reintroduction to the Brazilian rainforest. In 1991 the first black-footed ferret kits born at SCBI were returned to the wild. The black-footed ferret reintroduction program continues today, as do many other reintroduction efforts.

The Zoo’s breeding programs for endangered species living in human care flourished over the past several decades. The breeding programs welcomed giant panda cubs, Sumatran tiger cubs, kori bustard chicks, African lion cubs, Cuban crocodile hatchlings and Andean bear cubs, among many others. Some notable births include the first kiwi chick to be born outside New Zealand (1975), the first Komodo dragon to hatch outside of Indonesia (1992), and the birth of the first ever-surviving panda cub at the Zoo (2005).

In 1995, Zoo and SCBI scientists were the first to discover the lethal elephant endotheliotropic herpes virus (EEHV) which affects both wild and zoo elephants. And in 1999, Zoo pathologists helped discover the chytrid fungus, a lethal fungus responsible for massive global amphibian declines.

Since 2006, SCBI scientists have cryopreserved eggs and sperm from coral species around the world, and helped establish the first genome repository for Great Barrier Reef coral in 2011. In 2010, the Zoo became the first zoo or aquarium to successfully grow two species of anemones.

On land, SCBI launched Virginia Working Landscapes to preserve native biodiversity and encourage the sustainable use of working landscapes in 2009. The following year, SCBI became one of the first land-based participants in the National Ecological Observatory Network (NEON) in the U.S., collecting data on various environmental factors.

The Zoo and SCBI continue these initiatives, along with many more, into the present day.

Ever-evolving since its humble origins in the late 19th century, the Smithsonian’s National Zoo and Conservation Biology Institute began its latest phase of rejuvenation in the early 2000s. The renewal was marked by state-of-the-art exhibits incorporating research by Zoo and SCBI scientists, and was first seen by the public with the completion of Asia Trail in 2006. This commitment to modern exhibits backed by solid science has continued with the complete renovation of the American Trail in 2012 and the completion of Elephant Trails in 2013. The investment in new facilities was not limited to public exhibits; behind-the-scenes, SCBI built a new state-of-the-art Genetics Lab—originally founded in 1991— at the Zoo in Washington, D.C., which opened in 2010.

Throughout its history the Smithsonian’s National Zoo and Conservation Biology Institute have worked with many partners to save species and their habitats. SCBI particularly has focused on training the next generation of conservationists. In 2008, the Smithsonian-Mason School of Conservation was established at SCBI headquarters in Front Royal, Virginia, enabling undergraduate, graduate, and post-doctoral students to study with SCBI scientists and George Mason University professors. The Cornell-Smithsonian Joint Graduate Training Program, which has been accepting applications since 2011, allows students to benefit from the dual mentorship of a Cornell faculty member and an SCBI scientist. The program’s very first student produced the first domestic puppies from in vitro fertilization in 2015, solving some of the mystery of canid reproduction.

Today, the Smithsonian's National Zoo and Conservation Biology Institute cares for about 2,700 animals representing more than 390 species. SCBI scientists study and breed more than 20 species at their headquarters, including those that were once extinct in the wild, like black-footed ferrets and scimitar-horned oryx. Its major research initiatives are organized into six science centers: Conservation Ecology, Conservation and Sustainability, Conservation Genomics, Migratory Birds, and Species Survival. Other initiatives include the Global Tiger Initiative, Virginia Working Landscapes and the Global Health Program. Their work doesn’t stop at the gates of SCBI. Approximately 200 SCBI scientists and students collaborate with colleagues in more than 30 countries.