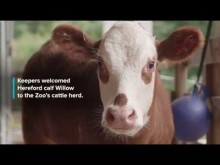 Cattle are important domesticated animals that provide meat and milk. Many breeds exist, some emphasizing beef production, others emphasizing dairy production. The Smithsonian's National Zoo exhibits a polled Hereford, which is a beef breed. Cattle are members of the Bovidae family, which also includes gazelles, African antelope, Asian water buffalo, bison and domesticated species, such as sheep and goats.

An individual may be referred to as a bull, cow, heifer, steer or calf. These terms refer to an animal's sex, age and reproductive status. Calves are cattle of either sex that are 1 year old or younger. Bulls are intact male cattle of any age, while the term steer refers to castrated male cattle. A heifer is a female that has not yet had a calf, and a cow is a female that has had at least one calf. In most species, the bull is much larger than the cow. Breeds can be polled (genetically hornless) or horned. Both male and female wild cattle species have horns, and the bull's horns are larger and thicker than the cow's.

Unlike humans, cattle have panoramic vision, which means they can see almost all the way around themselves without moving their heads. Their depth perception, however, is only focused in a small forward view. This means that, while a cow might be able to see you standing at its side, it cannot necessarily judge how close or far away you actually are. This may explain why a cow can be startled when approached, even if you have been in its field of vision for some time.

There are three types of cattle:

Modern domestic cattle evolved from a single, early ancestor—the auroch. It is believed that the last auroch was killed in Poland in 1627. Early cattle provided meat, milk and labor to their owners. In many cultures, cattle have spiritual, economic or political importance far beyond the monetary value of the animals themselves.

Cattle are ruminants; their complex, four-compartment stomach enables them to digest and convert plant material into energy and important “building blocks” of the body. They eat hay, corn, soybeans, grass, wheat and silage (fermented feed). They can make use of low-quality or nonproductive rangeland, but must be properly managed to avoid causing damage to the environment.

These herbivores' diet typically consists of hay or roughage (80 to 90 percent of total dry matter), commercial feed that includes grain, vitamins and minerals, and water. Proper feeding of cattle can be complicated and requires a combination of scientific knowledge, creativity and good management. The amount and type of feed that a single cow, calf or bull is fed depends on how much he or she weighs, how old he or she is, how much milk a cow gives and where she is in her gestation cycle. Cattle spend approximately six hours a day grazing and another eight hours ruminating.

Females reach sexual maturity when they are about 1 year old and typically have their first calf around age 2. Breeding can continue until a female is about 12 years old and can occur year-round. Estrus (heat) is the period of time when a cow or heifer is sexually receptive and signals that an egg is about to be released. It normally occurs every 18 to 24 days. The average time that a female is in standing heat is about 12 to 18 hours. A female in standing heat allows males to mount her as she stands. Ovulation follows standing heat. Breeding can be natural or through artificial insemination.

Usually, one calf is born after nine months of gestation. Labor typically lasts two to four hours, with the calf emerging front feet first with its head tucked between its legs. A cow may occasionally have twins. If the twins consist of a male (bull) and female (heifer), the heifer calf is usually infertile (called a freemartin heifer). Infertility in freemartin heifers occurs due to a transfer of hormones or cells from the developing male calf, causing the female's reproductive tract to be underdeveloped.

Calves are precocial, meaning they are able to stand and walk within an hour after birth. A calf needs to drink milk within the first few hours following its birth. This special milk is called colostrum and contains antibodies that help the calf fight off disease and stay healthy. Cows produce colostrum for the first 72 hours after giving birth to a calf. Calves are weaned when they are about 6 to 7 months old.

Kids’ Farm is home to a polled Hereford heifer named Rose, a Hereford calf named Willow, and a Holstein calf named Magnolia. Magnolia is black and white with black speckles on her nose. Rose is red and white with curly hair on her head. Her coat is short and sleek in the summer and longer in the winter. Willow is the youngest cow at Kids' Farm. She is also red and white with a red spot above her nose.

Where to find the Cow