The Bird House's male Baltimore oriole seems to prefer the company of people to his fellow migratory birds. To help him socialize, keeper Jordana Todd is teaching him some husbandry behaviors that help animal care staff care for him, such as landing on her arm, showing his body parts, and entering a crate on cue. Learn how she trained Oriole in the latest keeper Q & A.

This story appears in the May 2016 issue of National Zoo News. Want animal tales delivered straight to your inbox? Sign up for the e-newsletter here. 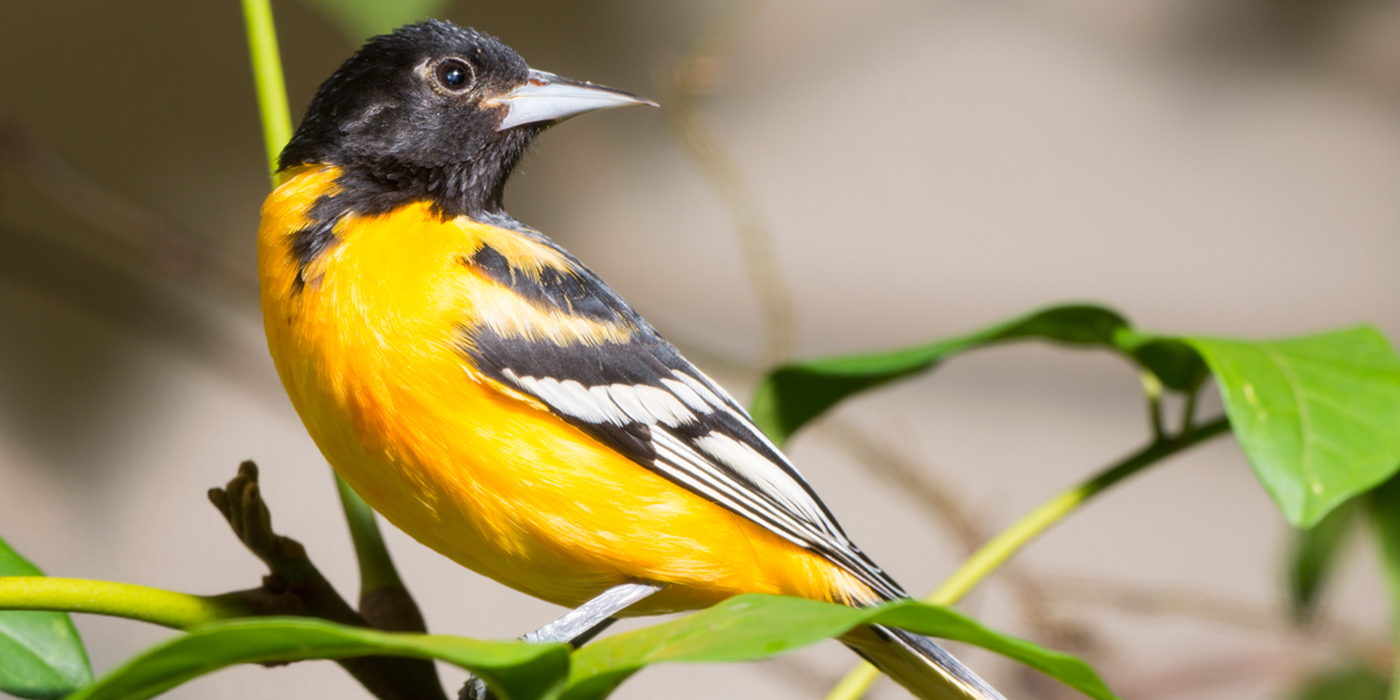 Our male Baltimore oriole-nicknamed "Oriole"—is a 5-year-old, wild-born bird from the mid-western U.S. When he was young, he was injured somehow and lost a toe. A rehabilitation facility took him in and hand-raised him. As a result, he imprinted (socially bonded) with the people that were taking care of him.

Rehabilitation facilities aim to release birds back into the wild once they've become strong enough to take care of themselves. However, because Oriole imprinted on his caretaker, the facility was concerned that he would follow people if released. Where there are people, there are also cats, dogs, cars, and glass windows-all things that could pose a danger to Oriole. So, they placed him at the Columbus Zoo in Ohio, where he lived in a large aviary with other migratory bird species. Unfortunately, they discovered that while Oriole is very social and confident around people, he was very anti-social and antagonistic toward the other birds.

Our Bird House has a perfect space for Oriole—a kind of bachelor pad—where he could live by himself but socialize with his keepers and Zoo visitors. We're thrilled to have him because he's a terrific ambassador for telling the story of migratory birds that live in our own backyard.

What are you training Oriole to do?

Here at the Zoo, we use positive reinforcement training; it's always the animal's choice whether to participate or not. If Oriole does participate and successfully does the behaviors asked of him, he receives a reward. Having a routine training schedule makes daily care as stress-free as possible for him and for his keepers. In the wild, these birds usually live to be 4 or 5 years old. This male is going on 6 years old, but he could live to be 15 years old in human care. This sort of training helps us to provide him with the best care possible.

Lately, I've been training him to land on my arm and to move to a specific branch in the enclosure and turn on cue. This sort of training helps me to assess his body condition and ensure that he looks healthy and doesn't have any injuries (like cuts or scrapes). On a regular basis, we also train husbandry behaviors such as stationing (standing still) on a scale or entering a crate. Both of these come in handy for monitoring his health and helping us transport him in the event he needs to visit the veterinarians.

Our training program also gives Oriole an opportunity to spend time with his keepers. Training is one of the best ways to get to know an animal's individual personality, and he is a very confident and social bird who enjoys being around people. Even when we are not around, he usually sits on the branch closest to the public viewing area and people-watches!

What are Oriole's rewards for training?

When Oriole does a behavior asked of him, he receives a variety of food rewards that include mealworms (beetle larvae), crickets, and waxworms. Most song birds eat insects, but they also like to eat fruit! Baltimore orioles have a sharply pointed bill, this helps them pierce fruit and drink nectar. Baltimore orioles are notorious for loving oranges, and Oriole is no exception. So, if you want to attract Baltimore orioles to your yard, put some orange slices on a kebab skewer and hang it from a tree limb!

What were the challenges of training?

Oriole is a really smart bird—he picked up the behaviors within 2-3 training sessions. He's so smart, in fact, that after just three sessions he realized landing on my arm equaled food. For a while, he would land on my arm repeatedly just to get the treats! So, I adjusted the training to only reward him if I cue him to land on my arm.

I've had an opportunity to work with lots of different species—including mammals—and I am incredibly impressed with his ability to quickly master the behaviors we're training! He's a good problem-solver.

What's the next step?

Oriole is getting close to being able to come out of the enclosure and do one-on-one interactions with visitors. At the moment, he is regularly spending time in our bird resource room where we host Meet-A-Kiwi demonstrations. Right now, we are getting him acclimated to staff and interns.

We want him to be comfortable around a variety of people, so that he can take short flights around the room and return to a spot on cue. Not all wild animals are suited to be an education animal, but he has the confidence and the sociability to be a successful demonstration animal. We look for individuals that really enjoy being around people.

Why is the zoo studying oriole migration?

Baltimore orioles are a migratory species and travel internationally. The Washington, D.C. area is one of their breeding grounds, so they reside here only from April to September before overwintering in Central America.

From the Smithsonian Migratory Bird Center research, we know Baltimore oriole populations are still pretty stable throughout their range. But, other songbirds are not so lucky and are much more affected by human development and climate change. So, studying migrations gives our researchers insight into how changes to our environment are affecting migratory bird populations.

The Smithsonian's National Zoo is transforming its historic 1928 Bird House and surrounding plateau into an educational celebration of birds and bird migration. Experience Migration will be a first-of-its-kind zoo attraction that immerses visitors in birds' miraculous annual journeys. Watch for updates on the Bird House exhibit page.