The Curious Colonization of the Humboldt Penguin

When it comes to choosing a location for a natural gas marine terminal, PERU LNG (Liquefied Natural Gas) discovered that the options are not always black and white. When their construction site became the home of choice for Humboldt penguins, PERU LNG called upon the Smithsonian Conservation Biology Institute (SCBI)'s Biodiversity Monitoring and Assessment Program (BMAP) to study the terminal's impact on wildlife. As BMAP's marine managing director Ximena Velez-Zuazo explains, the penguins' prosperity surprised everyone involved.

What is a Humboldt penguin?

These birds get their name from their native habitat, the Humboldt Current, which spans South America from Chile to the tip of Peru. Humboldt penguins have white C-shaped patches of feathers on their heads, pink patches on their faces and black feathers along their backs and tails.

Why is SCBI studying these penguins?

PERU LNG is a liquefied natural gas company located approximately 103 miles south of Lima, Peru. In 2007, they began construction on a breakwater—a structure used to minimize the effects of damaging waves—for a natural gas marine terminal. As they began working, they noticed two Humboldt penguins near the construction site!

The presence of the penguins prompted PERU LNG to partner with SCBI's Center for Conservation and Sustainability to research the seabirds and other marine life at the breakwater site. Our Biodiversity Monitoring and Assessment Program, or BMAP, monitors ecological trends and the company's effects on species and nearby habitats.

Humboldt penguins are listed as vulnerable by the International Union for Conservation of Nature, so both entities wanted to coordinate the construction and operation of the gas pipeline with conservation in mind.

What happened to those two Humboldt penguins?

Like many other penguins, they were just passing by. PERU LNG didn't know it when they built the breakwater, but it's a perfect place for penguins. It appears that these penguins were young individuals and adults looking for a new place to establish themselves after being displaced from the nearby Guano Islands.

By the time the terminal was completed in 2009, Humboldt penguins had already colonized it. In 2012, the colony had grown to 60 penguins, and, by the following year, that number had grown to 381 individuals. As of May 2016, we’ve counted 800 penguins in the colony.

In fact, the colony has become so populous that it has since expanded to a neighboring breakwater, which is home to more than 100 penguins. And to think it all started with those two that were just passing by! 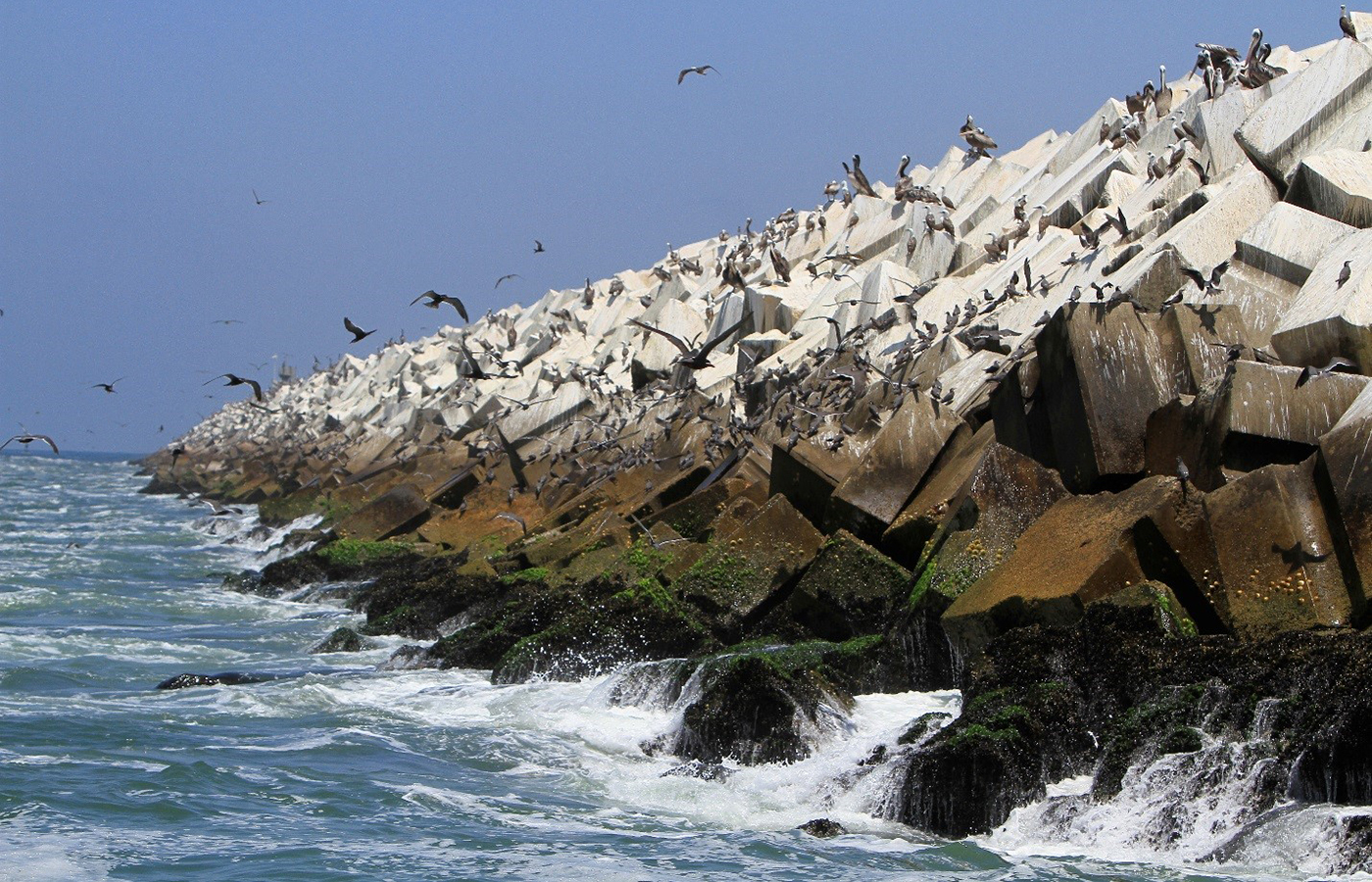 Why do the penguins keep coming back?

The breakwater is situated against a sandy beach and calms the waves that are intensified by a nearby international port. It is made of concrete bricks on one side and natural rock on the other. The construction creates a multitude of caves and crevices that are perfect hiding and nesting places for penguins and other sea birds.

The breakwater also provides a refuge to the underwater ecosystem, creating a rich haven for marine creatures—including the anchovies that Humboldt penguins eat. BMAP also studies how those species are affected by man-made structures.

Actually, it seems that this kind of colonization is very rare for penguins! This group is only the second known case of penguins colonizing a man-made structure in the world. The other colony is located on the St. Kilda breakwater near Melbourne, Australia and was home to 1,000 penguins as of 2006.

How is the breakwater affecting the penguins?

Aside from the sheer size of the Humboldt penguin population, we found other striking evidence that these penguins are thriving in this unexpected habitat. Humboldt penguins nest two times per year and lay one or two eggs each time. However, our preliminary evidence shows that this colony may be consistently producing two eggs.

This colony also appears to hunt in much larger groups than other Humboldt penguins. Usually this species hunts in groups of ten or less. But, this colony sends out groups of twenty-to-thirty birds to catch fish! These high numbers suggest that the penguins are comfortable enough in the waters to hunt in large groups, and it also takes some of the pressure off of individual hunters.

Additionally, the penguins get along quite well with the other marine birds living on the breakwater, so there is not much competition for resources.

Combined, these trends suggest that they can spend less energy on hunting and more on producing offspring. These observations also suggest that the colony is continuing to grow and might indicate that when they travel from the breakwater, they do not stray very far.

What are the next steps for studying this colony?

We want to learn more about the penguins' feeding and reproductive behavior, health, migration and habitat use. We can do this by using tracking devices and studying their genetics, daily activities and reproductive peaks. We'll also continue to count the number of penguins at various stages of life.

After observing this penguin colony for the last seven years, we hope to develop a protocol for wildlife monitoring in breakwaters and other similar infrastructure. Broadly-speaking, SCBI scientists are working with Peruvian researchers and students to detect potential environmental impacts early and make recommendations to businesses to follow best environment practices. Often, that includes reducing the footprint of operations like natural gas pipelines.

What implications does colonization of man-made structures have for the future of conserving marine life?

The success of the Humboldt penguin colony at this man-made structure has significant implications for the future of the conservation of marine species. It shows that if properly maintained and considered from a standpoint of conservation, these marine infrastructures could be used to provide habitats for marine animals, which could have a lasting impact on species that are struggling for survival.

We're excited to explore the possible roles of breakwaters like this one in protecting natural reefs and maintaining artificial ones. With the success of this colony, we could begin to see future breakwaters that are designed with biodiversity in mind!

From the Andes to the Pacific
Scientists are monitoring habitat and species, including the Andean cat, pencil catfish and Peruvian long-snouted bat, to help integrate biodiversity conservation into the construction and operation of a gas pipeline that stretches from the eastern Andes to the Pacific coast of Peru.