For the first time, an egg laid by a female brown kiwi at the Smithsonian Conservation Biology Institute (SCBI) in Front Royal, Va., hatched May 10. The chick is the first for parents Ngati Hine Rua (female) and Ngati Hine Tahi (male). SCBI has previously hatched eggs originally laid at other zoos. Keepers will not know the sex of the chick for several weeks.

After Ngati Hine Rua laid the egg, Iwi, another male living at SCBI, incubated it for 30 days before keepers moved the egg to a meticulously climate-controlled incubator where it finished developing. Kiwi do not care for their chicks, which are capable of caring for themselves at birth. After hatching, the chick was moved to an incubator especially for newborn chicks. The chick appears to be healthy and doing well.

Kiwi, flightless birds similar in size to chickens, lay the largest egg-to-body-weight ratio of any bird. A kiwi egg is about 20 percent of the female's size. Kiwi live in mated pairs and generally mate for life. The pair will defend a territory, which includes their nest. After females lay their eggs, they leave the egg with the male to incubate by himself. A chick will stay in its parents' territory for up to one year, but is able to hunt and fend for itself from birth.
The nocturnal kiwi is endangered due to predators introduced to New Zealand by humans. Kiwi evolved without terrestrial mammal predators. Their biggest threats are dogs, cats and stoats introduced by humans.

The Smithsonian Conservation Biology Institute plays a leading role in the Smithsonian's global efforts to save wildlife species from extinction and train future generations of conservationists. SCBI spearheads research programs at its headquarters in Front Royal, Va., the Smithsonian's National Zoo in Washington, D.C., and at field research stations and training sites worldwide. SCBI scientists tackle some of today's most complex conservation challenges by applying and sharing what they learn about animal behavior and reproduction, ecology, genetics, migration and conservation sustainability. 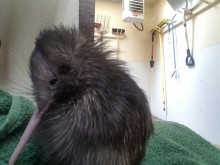