The Smithsonian’s National Zoo and Conservation Biology Institute and the Nashville Zoo are pleased to announce the birth of a male clouded leopard on March 1, 2017 from an artificial insemination (AI) procedure using frozen/thawed semen. This accomplishment is a first for this species and a giant step for global conservation efforts.

“This cub, the first clouded leopard offspring produced with cryopreserved semen, is a symbol of how zoos and scientists can come together to make positive change for animals and preserving global biodiversity,” said Adrienne Crosier, biologist at the Smithsonian Conservation Biology Institute. “Collaboration is the key to conservation of clouded leopards, along with so many other rare and endangered species we care for and study.”

The Smithsonian’s National Zoo and Conservation Biology Institute and Nashville Zoo have a long history of working together on clouded leopard conservation. Since 2000, they have collaborated with Point Defiance Zoo and Thailand’s Zoological Park Organization to form the Clouded Leopard Consortium and develop breeding programs as well as field monitoring projects for clouded leopards in Thailand. Because the captive clouded leopard population is not self-sustaining, it necessitates the need for intensive reproductive management techniques to maintaining captive populations not only in the U.S. but also throughout the world.

“This is an enormous accomplishment for both Nashville Zoo and the team at the Smithsonian,” said Dr. Heather Robertson, Director of Veterinary Services at the Zoo. “It means we can collect and preserve semen from clouded leopard populations around the globe and improve pregnancy outcomes from AI procedures in this species.”

After birth, the cub was removed for examination and will be hand-raised by keepers to ensure survival and well-being. This process also lowers animal stress for future hands-on care. The cub will stay at Nashville Zoo with plans to eventually introduce him to a potential mate.

The first successful clouded leopard AI was performed at Nashville Zoo in 1992 by Smithsonian scientist JoGayle Howard and Nashville Zoo President Rick Schwartz. In 2015, Comizzoli contributed to a successful birth using cooled semen and the new AI technique at the Khao Khew Open Zoo in Thailand.

Clouded leopards are among the rarest of the world’s cat species and one of the most secretive. Due to limited knowledge of this species, they have proved difficult to breed in captivity. They are sensitive to auditory and visual disturbances, increasing the stress levels during captive breeding programs – leading facilities, such as Nashville Zoo, to work with artificial insemination specialists to increase the size and diversity of the captive bred population. 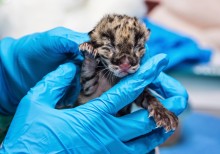 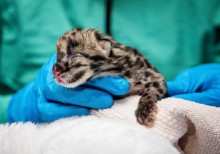 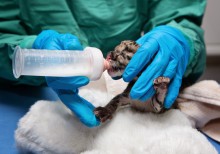 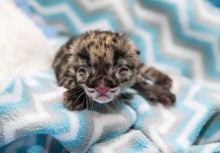