The Smithsonian's National Zoo and Conservation Biology Institute confirms the first giant panda cub born at 5:35 p.m. and a second giant panda cub was born at 10:07 p.m., Aug, 22. Shortly after the second birth, a panda team of three keepers retrieved one of the cubs per the Zoo's Giant Panda Twin Hand-Rearing protocol. The cub was placed in an incubator and cared for by veterinarians and panda keepers.

The panda team believes the first cub they retrieved was the second cub born at 10:07 p.m. This cub continues to vocalize very well and appears healthy. It weighed 138 grams last night and this morning weighed 132.4 grams. The cub has urinated and defecated - all good signs. The team fed the cub three times overnight at 2:20 a.m., 3:40 a.m., and 5:00 a.m. The cub received 30 - 40% of the serum it was hand-fed. The serum was banked from blood drawn from Mei Xiang last April during the artificial insemination. The nursing bouts were short but the team considers them successful. The goal was to give the cub antibodies (colostrum alternative) as it has not yet nursed on Mei Xiang. This cub has now been marked with a little green food coloring on its left hip.

At approximately 6:30 a.m. this morning, the panda team was able to swap cubs. This cub, believed to be the first born, weighs 86.3 grams. It is vocalizing very well and appears strong. The panda team does not plan to feed this cub as it will be switched back to Mei Xiang in a couple of hours. However, they are prepared to feed the cub if it demonstrates certain behaviors.

The Smithsonian's National Zoo is one of a few zoos with expert nutritionists on staff. They have prepared formula and trained for this scenario. Formula ingredients include: water; human baby formula; and puppy formula. The ingredients are mixed together and strained to omit clumps. Our concern now is whether Mei Xiang will allow the panda team to consistently swap the cubs. The team developed a few different strategies and will continue to try different methods of swapping and hand-rearing. A lot will be dictated by Mei Xiang.

The panda team will alternately swap the cubs, allowing one to nurse and spend time with Mei Xiang while the other is being bottle fed and kept warm in an incubator. The primary goal for the panda team is for both cubs to have the benefit of nursing and spending time with their mother. It is too early to guess about when the cubs will be placed together.

Giant pandas give birth to twins approximately 50 percent of the time. This is only the third time a giant panda living in the United States has given birth to twins. There are only two other female giant pandas who have successfully reared twins and it required a lot of human support.

The Zoo will continue to provide daily updates on Mei Xiang through its @SmithsonianZoo Instagram account using #PandaStory, and the Giant Panda e-newsletter. 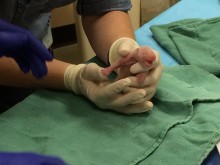