The daring and adventurous sloth bear cub, Hank, made his public debut at the Smithsonian's National Zoo today. He is the first sloth bear born at the Zoo in seven years. Born Dec. 19, 2012, Hank and his mother, Hana, have spent the past six months in a den near the Asia Trail exhibit. Now that he is adept at climbing, the Zoo's animal care staff are confident he can conquer the yard's complex climbing structures and varied terrain. Visitors can see the family on Asia Trail daily from 8:30 a.m. to 10:30 a.m., weather permitting.

Sloth bears in general are full of personality, but watching Hank explore and play in his yard is especially endearing, said animal keeper Mindy Babitz. Only 18 zoos in the U.S. exhibit this species, so visitors are in for a rare and special treat watching him grow up.

Via the live Sloth Bear Cub Cam on the Zoo's website, animal care staff and the public have had the opportunity to watch Hank play, grow and ride on his mother's back. Keepers will share the information gathered with the Association of Zoos and Aquariums' Species Survival Plan for the benefit of other institutions that exhibit and want to breed this species. Hank is one of seven sloth bear cubs born to the North American SSP this year, and his birth increases the population in human care by three percent.

Last month, the Zoo's Facebook fans elected to name the cub Hank, a moniker that combines the cub's parents' names, Hana and Francois. Keepers have spent the last few months training Hank and teaching him behaviors that will help animal care staff evaluate his health, such as presenting body parts and opening his mouth. The Zoo will continue to share the latest updates and photos of the cub on Facebook and Twitter.

The International Union for Conservation of Nature lists sloth bears as vulnerable because populations in their native Bhutan, India, Nepal and Sri Lanka are decreasing due to loss of habitat and poaching. 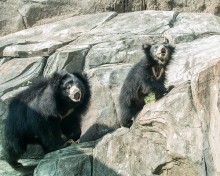