Given the choice between mealworms and melons, the Smithsonian’s National Zoo’s sloth bears—6-year-old female Remi and 5-year-old male Niko—will almost always choose the former, even when their diet is presented to them in the form of a photo. Animal keepers at the Zoo’s Asia Trail exhibit are the first to confirm that sloth bears can recognize 2D images as representations of 3D objects, a discovery that can enable institutions that exhibit and breed this species to better manage and enrich the lives of individual animals in their care. The findings of this study were published Jan. 26 in the journal Animal Cognition.

“Now that we know that sloth bears can make the connection between a photo of food and diet items that they are familiar with, we can use this information to give the bears more choice and control over how they spend their day,” said Stacey Tabellario, Asia Trail keeper at the Smithsonian’s National Zoo and the paper’s lead author. “Applying what we have learned from this cognition study, we can present the bears with photos of their enrichment items or their habitats to learn even more about their preferences. We are always looking for ways to increase our animals’ wellbeing, and this is a great opportunity for Niko and Remi to have a say in the way we manage them.”

To determine whether the Zoo’s sloth bears could identify 3D objects by looking at 2D photos, animal keepers chose food as the study’s subject, knowing that the bears would be familiar with the choices presented and that viewing the images would elicit a behavioral response. Sloth bears have a long snout, flexible lips, nostrils that can close and large lung capacity. The bears use their lips like a vacuum, blowing dirt and debris away to uncover insects, then sucking them up to consume them.

To determine which foods the bears preferred, keepers presented Niko and Remi with 25 and 34 foods to choose from, respectively, and the bears would blow at the item to indicate which food they preferred to eat. At the conclusion of this step, keepers narrowed down the options to six high-preference foods and six low-preference foods per bear.

In the wild, insects—mainly ants and termites—comprise the majority of the sloth bears’ diet, though they have been documented eating seasonal fruits, honey, carrion and farm crops. At the Zoo, Niko and Remi receive a comparable diet that includes a variety of insects, fruits, vegetables, nuts, bear chow (kibble) and cereal.

Keepers then printed high-resolution photos of each food option, which the bears had not seen prior to this study, and held up two images at a time. Niko and Remi looked closely at the photos, assessed each image and blew on the option they preferred. According to keepers, Niko and Remi made their decision in a matter of moments, and quickly indicated their preferences when a food in the “high-preference” category was presented. Both sloth bears selected mealworms as a preferred food, as well as nuts, prunes and raisins. At the opposite end of the spectrum, omnivore kibble and orange were some of the least desirable foods.

“As a sloth bear keeper, I see evidence of Niko and Remi’s intelligence, communication, problem-solving skills and even their sense of humor,” Tabellario said. “For the first time, we have data to support what those of us who work closely with this species know to be true—that these animals are remarkably intelligent, and it is worth delving deeper into their cognitive abilities. The information gathered in this study will help influence not only the way we at the Smithsonian’s National Zoo manage these bears, but could also help other institutions that care for this vulnerable species.”

Sloth bears are not related to sloths but were given that moniker by English settlers who named them due to their dark, shaggy coat and long claws. Native to India, Sri Lanka and Nepal, sloth bears are considered vulnerable to extinction by the International Union for Conservation of Nature. Fewer than 20,000 remain in these countries due to habitat destruction and increased agricultural activity. 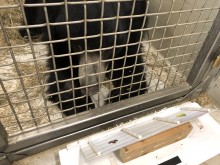