This authoritative text is intended for senior undergraduate and graduate students interested in conservation biology, conservation genetics and wildlife management. It will also be of particular relevance to conservation practitioners and natural resource managers, as well as a broader academic audience of conservation biologists and evolutionary ecologists.

“Habitat loss and declining population sizes have resulted in millions of small, isolated fragmented populations that are or will suffer from inbreeding problems, loss of genetic diversity and reduced ability to naturally evolve to environmental changes,” Ballou said. “Building links between the fragments or moving animals between them is often not considered. This default approach of ‘no action’ needs to be changed, and that is the primary purpose of this book.”

While the ever-advancing field of molecular genetics continues to introduce new tools to assess population fragmentation, adequate guidance regarding the effective use of the resulting data to promote species conservation is limited. The book provides numerous examples and detailed decision trees to help managers effectively use this new information. 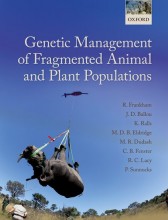