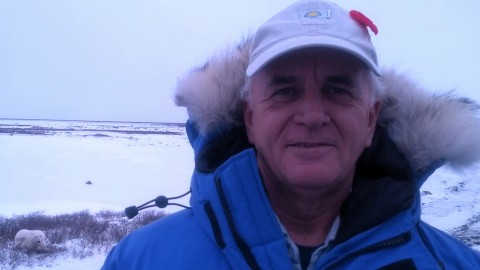 Don Moore is a zoo-based animal behaviorist, wildlife biologist and educator who has helped to renovate and manage several zoos across the United States for over 30 years. He has more than 20 years of experience working with North America deer in behavioral research and zoo collections. He has hand-raised white-tailed deer (including one in his bathtub), black-tailed deer, and reindeer/caribou, as well as pronghorn antelope and other hoofstock. He has worked extensively with elk and Pampas deer and once introduced Princess Christina of Sweden to a friendly herd of reindeer.

Reindeer and caribou are relatives of elk and other deer in the mammal group of even-toed hoofed animals called Artiodactyla by geeky scientists like me. Uniquely among the more than 45 species of deer, reindeer (caribou) of both sexes grow large antlers! Reindeer are a mostly-domesticated race of caribou.

A circumpolar species, reindeer and caribou are found around the world’s north. Greenland, Norway, Russia, Alaska, Canada, and the North Pole are all within the circumpolar Arctic range of these northern deer. Can you guess why reindeer and polar bears don’t have very many penguin friends?

How do reindeer measure up? Female reindeer are smaller than males, and New World wild Caribou tend to be larger than Old World domestic reindeer. One study found that adult female reindeer weighed about 220 pounds on average, with adult males weighing in at over 260 pounds. Reindeer stand about four feet high at the shoulder. (Interestingly, reindeer from the Norwegian archipelago of Svalbard are evolving toward “island dwarf” size, and are smaller. The eight tiny reindeer were probably from Svalbard).

How do reindeer talk to one another? Reindeer and caribou are usually very quiet. Bulls bellow during the fall mating season, or “rut.” Cows talk to their calves with grunts, and calves have their own infantile way of telling their mothers they need to drink milk.

A reindeer's summer hairdo is dark on top, lighter underneath, with a fringe of long hairs on the throat. Reindeer have very short tails. Long tails would be vulnerable to frostbite, but short tails are not good for swatting at swarms of arctic mosquitoes, so reindeers’ defense against these bity pests is to stay in the open in windy spots, or on colder snowfields that mosquitoes don’t like.

In the winter, a reindeer's hair turns a beautiful creamy color, very light. The coolest thing (maybe the most heart-warming thing, actually) about winter hair in northern deer such as reindeer is that it’s hollow! Just like your hollow-fill winter jacket, it has great insulating qualities so reindeer stay warm in frigid Arctic temperatures (or frigid air at higher altitudes)!

Some northern animals, such as squirrels or woodpeckers, can stay in the same place their entire life because their food is plentiful year-round. Others, like reindeer and caribou, migrate to keep up with food supplies or to get away from harsh, blustery winter conditions. (Reindeer that can fly probably get to eat cookies on their trip.)

The Porcupine caribou herd of North America is one of the world’s most famous herds of reindeer or caribou. Numbering almost 125,000 animals, they move from northern calving grounds along the shore of the Arctic ocean, where food is plentiful is plentiful in summer, to more protected wintering grounds where winds are lower and snow cover is not so heavy so food is available if they dig through the snow layer.

How far do reindeer migrate? Larger herds migrate longer distances. The large Porcupine caribou herd migrates from their summering grounds to wintering grounds about 400 miles away. But caribou outfitted with high-tech radio-locator collars have shown biologists that they move back and forth a lot on migration, so they are actually travelling over 3,000 miles each year! Svalbard reindeer have the shortest legs of any of the reindeer, and do not move far or fast while walking (books don’t say how fast they move while flying).

Does water stop a caribou migration? No, reindeer and caribou can swim strongly for miles at a time! This is one reason our friend Santa stays calm while flying over the ocean (although he often takes the Great Circle Route, which keeps him over continental landmasses most of the time).

What do reindeer eat? Lichen, especially one commonly known as “reindeer moss” (Cladonia rangiferina). And reindeer chew their cud, basically semi-chewed, swallowed and burped-up plant material; yummy! Lichens are organisms that are made of a combined fungus and an algae or other photosynthetic organism. The photosynthetic partner in lichen makes nutrients from sunlight, and the fungus lives off of it. Reindeer, caribou, and other herbivores that eat lichens survive on this very low-energy food that manages to exist in a very harsh arctic environment.

Reindeer feet are the widest of feet any deer. The dewclaws behind the hooves are well-developed, the sharp hooves provide traction on ice, and in winter hair grows between the toes. So, reindeer feet are like snowshoe adaptations for walking in Arctic snow.

Up on the housetop: Click, click, click! Reindeer are easy to hear as they move along, but not because their hooves are clicking on the roof. As caribou and reindeer walk, they make a clicking sound as tendons in their feet stretch across their foot bones. Imagine hundreds of reindeer all walking together, clicking as they walk and grunting to their calves!

When are reindeer and caribou calves born? After mating sometime before Christmas, females have a single calf after a gestation period of seven to eight months. Calves are precocial, which means they are born relatively developed and mobile. They take their first steps within one hour of birth, and can run several miles a couple of hours of birth. While this does let them play, more practically it also allows them to flee from potential predators. They are not spotted like the fawns of other deer.

Calves are all born in a very short time in the spring. They then grow quickly on some of the richest milk produced by any terrestrial mammal, at 20 percent fat. (Dairy cows produce milk with about 5 percent fat). Calves are weaned as early as one month of age! By comparison, eggnog is about 29 percent fat.

Toothless? Not quite! All deer, including reindeer and carbiou, lack upper incisors. But they have the rest of their teeth, just not the uppers in front. That means they can’t bite hard like horses might. No wonder Santa uses reindeer instead of horses to pull his heavy sleigh!

What members of the deer family are even bigger than reindeer and caribou? Moose, the biggest deer species! Bull moose can weigh up to 1,200 pounds, and stand over 6 feet at the shoulder. They only live around the edges of the Arctic, so no wonder Santa didn’t use them to pull his sleigh. Russians in the 19th and 20th century tried to train moose to pull sleighs, but you don’t see many moose pulling sleighs these days.

Non-Santa sources suggest the can swim five miles per hour, run ten miles per hour, and suggest that reindeer can travel 100 miles a day. (Books don’t say anything about how far they go at night!) One herder’s reindeer pulled a 250-pound load over snow one mile in three minutes (which comes to a speed of 20 miles per hour), so imagine what eight reindeer working together might accomplish!

What are antlers made of? Why do they look fuzzy? Both male and female reindeer and caribou have antlers; only male deer of all other species have antlers. Antlers are bony appendages that grow every year. The antlers grow quickly in a blood-supply-rich material we call “velvet” (because that's exactly what it looks like.) Since they are fast-growing bone, cancer specialists study deer antler growth to better understand bone cancers. Once the antlers are full grown, the antler velvet dries and starts to fall off, hanging in shreds from the antlers like moss from a tree. In early winter (for males) and late winter (for females), bone-dissolving materials invade the deers’ antler bases which causes them to shed the antlers. The millions of antlers shed by deer in different habitats are chewed by everything from rodents to the deer themselves, because they are high in calcium and other minerals needed for healthy bones and bodies. (This is why it’s hard to find antlers around when we are hiking or sledding)

Can reindeer fly? Are flying reindeer possibly just more “highly evolved” than “leaping reindeer?” Reindeer have a trotting gait, and appear to fly especially when they are running in powdery snow. But, they'd probably need to lose weight to get far off the ground. Although I have seen one jump mightily, I have never seen one fly. But I remain optimistic that I will see one jump higher some year!

So, the burning question is: What would happen if a flying reindeer pooped? Answer: I don’t know the answer, sorry! I’ve never experienced that. I only know what happens when flying birds poop and if I’m the target, it’s not pleasant!)

How can we track reindeer in harsh Arctic conditions? Many reindeer and caribou wear satellite-collars that allow deer biologists to track them even during the cold, dark Christmas season with it’s stormy, snowy weather. Although a certain federal NORAD project seems to be top-secret, these reindeer satellite collars are probably how our National Weather Service tracks Santa on Christmas Eve.