On Friday, June 21—Bozie's last day of quarantine—she got access to almost the entire barn. We intentionally left poop from each of the other elephants in the stalls, to see how she would react. Once everything was open, she was excited and ready to go, but instead of moving forward, she just danced in place and looked at us as if to say, "Aren't you coming?!" As soon as she realized that the keepers would lead the way; she leapt forward to go through the door. Bozie was extremely excited about the Kandula poop and did a lot of vocalizing about it. She was also interested in the poop from the girls, but not nearly as excited as she was about Kandula's.

We were able to weigh her as she walked across our scale. On June 21, Bozie weighed 8,820 pounds. Shanthi was only about 15 feet away from her, and the two girls stood head to head and talked. After a notable absence; Ambika eventually wandered in from outside to see what the fuss was all about and also visited with Bozie between the barriers. As time went on, Bozie's excitement grew and she became more and more worked up; squeaking, honking, trumpeting and making all kinds of noises.

We called Jenny, her Baton Rouge keeper, to let her know how things were going and to let her hear the vocalizations. Surprisingly, the phone's background noise cancellation was so good that she couldn't hear Bozie at all, so we turned on the phone's speaker. The moment Jenny spoke over the speaker, Bozie, who had been running around like crazy, stopped dead in her tracks. Her eyes were directly on the phone and her ears flared out! I said "Jenny, I think she heard your voice, do you want to talk to her?" and held the phone up to Bozie. As if in answer Bozie immediately began talking, squeaking and chirping as if greeting Jenny! It was all just too cute, and it must have made Jenny feel wonderful to be greeted so enthusiastically. I must say it is the first time I have ever seen an elephant have a phone conversation! After that, Bozie eventually calmed down and enjoyed walking around the new areas of the barn for the rest of the day.

On Monday, June 24, we allowed the elephants to touch each other for the first time. We put the elephant, (in this case, girls only) in stalls with a non-solid barrier between them that allows them to touch and see each other without sharing the same space. Once we allowed Shanthi and Ambika to approach Bozie, Shanthi and Ambika were surprisingly indifferent and even uninterested initially. Bozie was not indifferent; she was desperate to see them and getting frustrated! Eventually Shanthi came over and let Bozie smell her, but she did not respond in kind. Ambika never approached Bozie.

Mid-day we decided to increase the area of tactile access. We gave Shanthi and Ambika multiple options for visiting Bozie. As soon as Bozie had access, she and Ambika interacted almost non-stop. Bozie displayed a lot of dominance behavior: She held her head up high, wrapped her trunk around Ambika's trunk and feet, and raised her feet in a dominance display. Ambika pushed with her head, hit out with her trunk and kicked Bozie a few times. Bozie stayed close by the entire time, when she could have chosen to walk away. We decided to leave them with tactile access all night. We left it so that Shanthi and Ambika had plenty of space to move about without interacting with Bozie if they preferred.

On Tuesday, June 25, the girls were interacting with more interest and positive interactions, but Bozie was still displaying dominance behavior.

Around mid- day, we decided to move forward with allowing the elephants to share the space. Again we stationed them where they could see the door open. Ambika immediately made her presence known and strode purposely through the door with confident ownership of the space. Bozie responded by attempting to push and dominate Ambika. Ambika was not about to give in and pushed and kicked back, not submitting in the least. Shanthi simply did not respond other than to brace herself and stand steady as a house when Bozie tried to push her around. Bozie tired of that immediately and went back to trying to establish dominance with Ambika. Eventually Bozie calmed down.

Our old lady Ambika grew tired. At 65 years old, her body is not always as strong as her will anymore. Ambika still didn't submit; she just removed herself from the battle. We proceeded with the afternoon routine of training sessions and feeding out produce and grains. This settled the elephants down a bit more and we set up their food and environment for the evening. Two keepers stayed with them for the night, sleeping in the barn where we could keep a close eye on their behavior. Around 8:00 that night, Bozie approached Ambika very solicitously. She made herself small, holding her head down low, flapped her ears, and began quietly squeaking. It looked as if she was apologizing to Ambika and asking to be friends! Eventually Ambika leaned her head into Bozie in a companionable way as if she were saying "OK, forgiven but not forgotten." They stood next to each other as Bozie tentatively touched Ambika on her temporal gland, ear, and vulva. After a few more minutes of that, Bozie went down to Shanthi and did the same with her. Early in the morning Bozie was comfortable enough that she laid down to sleep. 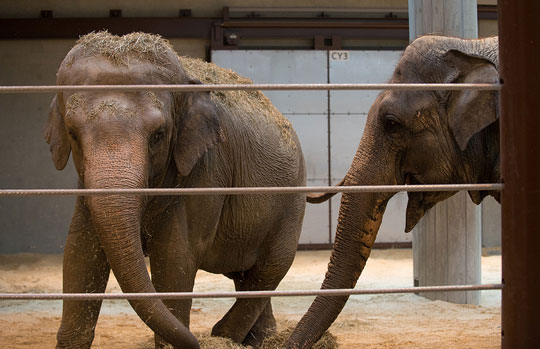