Carmelita To Be Part Of C2S2 Cheetah Sustainability Program

Next week, we will be transferring Carmelita from the National Zoo to the Smithsonian Conservation Biology Institute's Cheetah Science Facility to incorporate her into the C2S2 Cheetah Sustainability Program. A member of the Breeding Centers Coalition, SCBI has become a leader in the challenging field of cheetah reproduction. As a young, healthy female, Carmelita will be paired with a male as part of the Species Survival Plan in the hope that she will contribute to the cheetah population in human care. A total of 32 surviving cubs have been born at the National Zoo and SCBI to date.

Carmelita and her brother Justin were brought from SCBI to the National Zoo in 2012 as cubs. In partnership with USA Track & Field, the Zoo named the two cubs—a male and a female—after the fastest American male and fastest American female athletes in the 2012 Olympics 100-meter dash, Justin Gatlin and Carmelita Jeter. Justin remains on exhibit at the Cheetah Conservation Station with two other male cheetahs, Zabini and Granger.

Cheetahs, the fastest animals on land, are struggling to outpace threats to their survival in the wild. As the result of human conflict, hunting and habitat loss, there are only an estimated 7,500 to 10,000 cheetahs left in the wild. The International Union for Conservation of Nature considers cheetahs a vulnerable species. 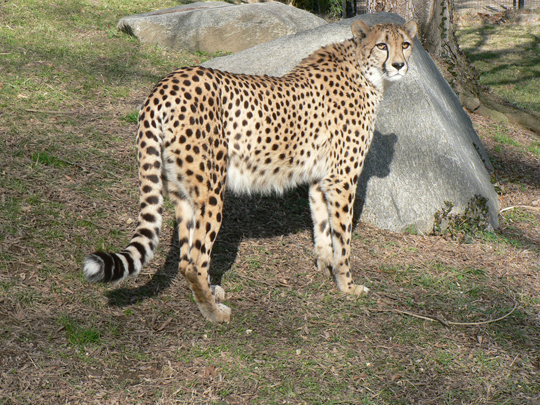