An endangered clouded leopard at the National Zoo's Conservation and Research Center (CRC) in Front Royal, Virginia, gave birth to a genetically valuable litter of two cubs early in the morning on March 24. Staff had been on pregnancy watch of the two-and-a-half-year-old clouded leopard Jao Chu for five days.

This is Jao Chu's first litter. She and the cubs' father, two-and-a-half-year-old Hannibal, were born in Thailand in a collaborative research program with the Zoological Park Organization of Thailand. The cubs' sex will not be known until the first veterinary exam.

The newborn cubs will not be on exhibit. However, Zoo visitors may get an up-close treetop view of two clouded leopards—a male named Tai and a female named Mook—in their exhibit at Asia Trail.

Due to deforestation and hunting, clouded leopards are vulnerable to extinction. National Zoo scientist JoGayle Howard and colleagues are aggressively working to save this species from decline. The Zoo has been working with clouded leopards at CRC since 1978, with the goal of creating a genetically diverse population. In the past 30 years, more than 70 clouded leopards have been born at the Zoo's research facility in Virginia, with the last litter born in 1993.

Breeding clouded leopards in captivity has been a challenge, primarily due to male aggression, decreased breeding activity between paired animals, and high cub mortality. In 2002, the National Zoo in collaboration with the Nashville Zoo and the Clouded Leopard Species Survival Plan (SSP) created the Thailand Clouded Leopard Consortium—the largest population of confiscated clouded leopards in Southeast Asia. The Clouded Leopard SSP oversees clouded leopard populations in zoos worldwide, and makes breeding recommendations for potential pairs based on the genetics of each cat. Since Thailand's captive cubs are only one or two generations removed from the wild, their genes are especially valuable.

To date, the Thailand Clouded Leopard Consortium has produced 33 surviving cubs. The National Zoo's program at CRC is the only one of its kind combining breeding with scientific research. For example, scientists still do not know why male clouded leopards attack their possible mates, but several graduate students at the Zoo are studying the males' behavior—one student plans to test anti-anxiety drugs used in humans and domestic cats in an attempt to suppress male aggression.

Howard and colleagues have learned how to reduce the risk of fatal attacks by hand-rearing cubs for socialization and also introducing males to their mates when they are six months old, allowing the pair to grow up together. Hannibal and Jao Chu, the only compatible pair of clouded leopards at CRC, are proof that these techniques work. The new cubs also will be handreared by experienced CRC staff.

Little is known about clouded leopards. These cats are native to Southeast Asia and parts of China in a habitat that ranges from dense tropical evergreen forests to drier forests if there is suitable prey.

They are the smallest of the big cats, weighing 30 to 50 pounds and measuring about five feet long. Their short legs, large paws, and long tail, which accounts for half their length, help them balance on small branches, and their flexible ankles allow them to run down trees headfirst. 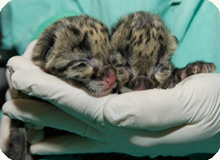