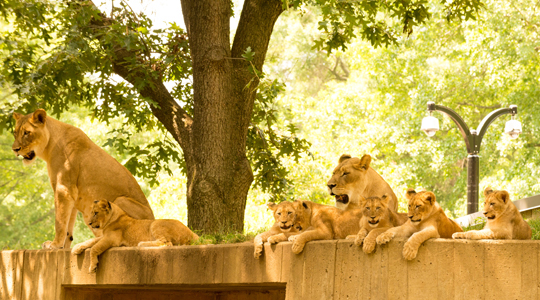 How have the cubs' personalities developed?

Rebecca: The personality of each begins to show itself at just a few weeks old, and these cubs are quite different from one another.

Eva is all lion! Every morning she greets me with a sassy growl. Even as a small cub, she was difficult to handle during vet exams and weigh-ins. Although the days of picking her up are far behind us, she remains feisty and tough and makes sure everyone knows it!

Kristen: Desta is very inquisitive and often seeks rough play with Shaka, Chisulo, and Jumbe. Both she and her sister Eva will defend each other when dad Luke singles them out in the yard by distracting him so the other can go indoors.

Rebecca: Jumbe has the ability to melt hearts when he looks at you with his big round eyes. It's a tender expression that has followed him from the first few weeks of his life and is a beautiful compliment to his easy-going personality. He's not shy, but he tends to lay low. His relatively calm demeanor makes him a joy to train. He gets along with everyone in the pride.

Kristen: Shaka seems to enjoy interacting with his keepers and acts like the "class clown" during training sessions. If he appears confused by what I'm asking him to do on cue, he'll do acrobatic body rolls instead!

Rebecca: I don't pick favorites, but Amahle has her paws wrapped around my heart! She is very laid back like Jumbe but learns things exceptionally quick like her mother, Shera. I have yet to hear her growl or hiss, even in the presence of food.

Kristen: Chisulo's personality reminds me of Baruti, his older half-brother who was born here in 2010. Size-wise, he's the largest of the cubs and seems to enjoy using brute force on enrichment items (and his siblings). Despite this aspect of his personality, he is laid back during training sessions. It can be challenging for me to motivate him! 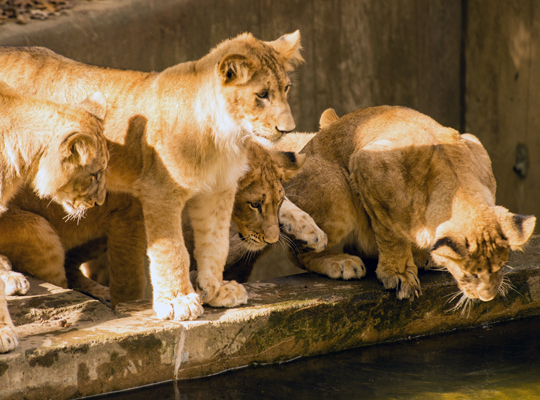 What training behaviors have they mastered?

Kristen: Desta, Chisulo, and Shaka have all mastered sit, lay down, open mouth, and presentation of paw pads.

From very early on, every time I asked Shaka for "down," he would lay down and immediately go into a full body roll. It's very charming!

Desta has made a lot of progress with her line-up behavior and her motivation for training has improved.

All three are doing really well on lining up next to the mesh and holding still for injections. The line-up behaviors in general are a huge step in the training process, so those I feel are most rewarding. It helps prepare the cubs for a lifetime of voluntary vaccines and other injections that they may require.

Every time the lions do a behavior that we ask of them, they're rewarded with a meatball.

Rebecca: Eva, Jumbe, and Amahle have mastered sit, lay down, open mouth, and line up. They just completed their one year exams, so in preparation we've been focusing mostly on body positioning/presentation for an injection of anesthetic and have practiced holding still for the injection.

People are usually surprised to hear that lions will voluntarily sit still for a shot, but it's the body positioning in the line-up training that presents the biggest challenge. We don't practice with needles and saline until it is just about time for an exam. This also helps us determine who is likely to tolerate a hand-injected anesthetic and who won't.

Now that exams are over, we're playing with some fun behaviors, like jumping onto a bench and rolling over. These behaviors aren't particularly important for husbandry, but it's a fun way to bond and build trust with the cubs. It's also a great way to exercise their minds and bodies on the days when it's too cold to go outside! 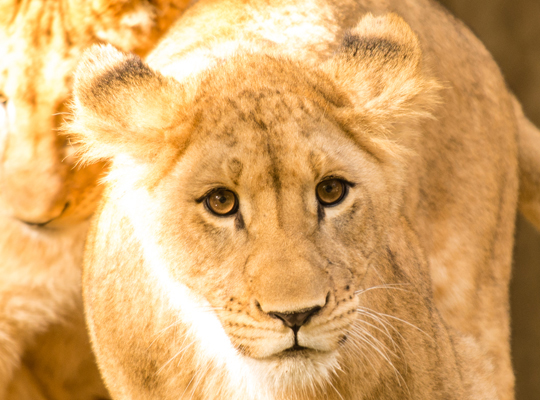 Who is the most challenging to train?

Kristen: Each of the cubs I work with has his or her own challenges. Sometimes, though, the challenges manifest in cute ways.

Shaka, who likes to do acrobatics when he doesn't quite get the cue, has so much personality that it's hard to get him focused on the task at hand. To help with this, I incorporate some fun targeting behaviors to keep him on point. It seems to help relieve his frustration.

Chisulo has taken a very slight backslide in his line up behavior because he seems to think his tail is moving involuntarily. During line up, his tail often swishes around so much that he chases and bites his tail rather than focusing on the training! However, I'm trying to use his tail-flicking to my advantage to train for blood draw over the next few months.

Rebecca: Eva has been the most challenging for me to train from the start, but I've noticed great improvement during the last several months. As she approached her first birthday (Jan. 24), I noticed that she was much more focused during training, and our sessions were lasting longer. She's the only one that that isn't quite ready to sit voluntarily for her shots, but she's real close. Amahle and Jumbe tie for easiest, although Jumbe is easily distracted while Amahle stays very focused no matter what is going on around her.

Getting past injection training is always a big hurdle, but I feel proud every time the cubs master a behavior. There is a look on their faces when they know they have finally figured out what it is that I've been asking them to do. After that, it's cake! With each behavior that they conquer, I know I'm helping to set the lions and their future care-givers up for success with regards to their care and management.

What is their favorite enrichment?

Rebecca: The lion cubs love to play! A favorite enrichment item seems to be burlap sacks. We'll stuff the sacks with hay and place them in different areas around the outdoor yard. The cubs will tear, shred, and tug-a-war these the sacks until there isn't anything but small rags left!

They also enjoy pouncing on boomer balls, modified metal kegs (which float in the moat), cardboard boxes, and natural enrichment like logs, rocks, and even pinecones. Amahle has been seen testing the waters a few times and we want to encourage moat play this summer!

Kristen: It is so important for the cats to have a wide variety of toys that encourage physical activity and mentally stimulates them. We would love to be able to give the cats a bobbin and new boomer balls that they can pounce on and play with in the yard. Readers who are interested in giving the cats a birthday gift can donate to the Enrichment Giving Tree, and we'll ensure the toys get to the cubs! 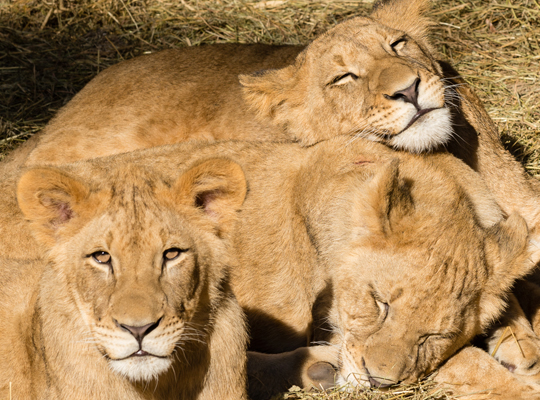 How much do the cubs eat?

Kristen: The cubs are fully weaned from their mothers and are fed communally. Altogether, they eat about 35 pounds of meat a day! To make sure everyone gets a fair share, we separate their food into six piles (which helps reduce aggression, too). As the cubs get older, we will begin to separate them for individual feedings.

Rebecca: Shera's cubs were six months when she stopped nursing them, which is typical. I can remember coming in one morning to find Shera resting on a bench. One of her cubs hopped up to nurse, but Shera simply used her rear foot to slowly push the cub away. She then rolled over so that her belly was facing the wall.

Naba continued nursing her cubs until they were about eight months. Shera's cubs took note of the available milk and often tried to nurse from Naba. Naba usually obliged, but lions only have four teats, which caused a stir if more than four wanted to eat at one time. Anytime the cubs began to fight over space to eat, Naba would close shop and walk away.

How much do they weigh?

Rebecca: Since Amahle is the youngest female, it's no surprise that she's the smallest. Chisulo, on the other hand, is already 30 pounds larger than his father was at the same age!

When will they be separated?

Kristen: We will continue to monitor their behavior, but I anticipate that by the time the cubs are 18 months old, we will separate them by gender.

Rebecca: At that point, male cubs will form a coalition with Luke and the females will remain a part of the pride with their mothers.

What's next for the cubs?

Rebecca: Now that the cubs are turning one year old, we are starting to see their deciduous teeth fall out, and their adult teeth coming in. This will continue over the second year of their life.

Kristen: In the next few months, the African Lion Species Survival Plan will provide guidance on where the cubs' new homes will be. Once we have recommendations, we will gradually separate those cubs from the group.

Rebecca: Our team will work with the SSP to ensure that each of the receiving facilities is a good fit for each of the cubs. We'll keep everyone posted as we learn more!