Asian elephants Kamala (39), Swarna (39) and Maharani (23) arrived safely at the Smithsonian's National Zoo on May 23, 2014. They are on loan from the Calgary Zoo in Calgary, Alberta, Canada, and will join the Zoo's herd of four Asian elephants Ambika (66), Shanthi (39), Bozie (38) and Kandula (12). The three female elephants left the Calgary Zoo on May 20, in two trucks accompanied by an expert animal care team, including keepers and veterinarians from both zoos. The team observed the elephants during the 60-hour, 2,500-mile international trip via television monitors and stopped every few hours to give the elephants food and water and to ensure they were doing well.

Elephant fans can view the new elephants immediately on the new elephant cam, which operates in real time and will be on 24 hours a day. (Note: the elephant cam is stationary and the elephants can choose to move to areas that are off camera.) "It was quite a journey, but we planned and prepared for nine months, which served us well," said Tony Barthel, curator of Elephant Trails at the National Zoo. "The whole transport team worked together seamlessly to make the elephants as comfortable as possible and get them to Washington safely. It's going to be very exciting to see the two herds get to know each other and form a new herd here."

In the months leading up to the move, keepers at the Calgary Zoo worked to acquaint the three female elephants with their travel crates. Elephant keepers from the National Zoo also traveled to Calgary several times to meet and learn about the elephants they would be caring for.

"Our dedicated team of animal care staff worked diligently for more than three months to train our female elephants to ensure a safe journey," said Colleen Baird, Calgary Zoo curator. "They were also very involved with activities for our community that allowed visitors to engage in a successful elephant farewell."

After arriving at the National Zoo, the three elephants moved from their specially built 10,000-pound travel crates into quarantine in the elephant barn. Kamala, Swarna and Maharani will be in quarantine for a minimum of 30 days, which is standard procedure for any new animal at the Zoo. During their quarantine period, the elephants will have access to five stalls inside the elephant barn and one off-exhibit outdoor yard. They will be cared for by keepers, nutritionists and veterinarians the entire time. Keepers will provide them with a variety of enrichment items and activities, including bamboo, boomer balls and puzzle feeders to keep them stimulated. After they have cleared quarantine, Zoo staff will begin slowly introducing the females to the Zoo's original herd.

The Calgary Zoo announced in April 2012 that it would relocate its elephants based on their long-term welfare needs. The National Zoo was chosen as the new home for the elephants in August 2013. Last year, the Zoo opened the state-of-the-art exhibit Elephant Trails. Elephant Trails was designed in keeping with the best practices for Asian-elephant management. It includes space for socializing, training and playing while providing the elephant staff safe access to the animals. Philanthropist David M. Rubenstein contributed $2 million, enabling the National Zoo to bring the elephants to Washington. The funds covered the costs of elephant transportation, elephant keepers' travel and training, health care and veterinary assessments, facility upgrades and in situ conservation. It was Rubenstein's second major gift to the National Zoo. In December 2011, Rubenstein gave $4.5 million to fund the Zoo's comprehensive giant panda program through 2016. That gift supports conservation work in China, reproductive science, professional training programs, giant panda husbandry at the Zoo and public education programs. Rubenstein, co-chief executive officer of The Carlyle Group, has been a member of the Smithsonian's Board of Regents since 2009.

The Zoo will provide updates on the elephants on Facebook, Twitter and Instagram and through National Zoo News. Visitors can see Shanthi, Ambika, Bozie and Kandula on exhibit at Elephant Trails. Kamala, Swarna and Maharani will be visible on the elephant cam until after they have cleared quarantine. 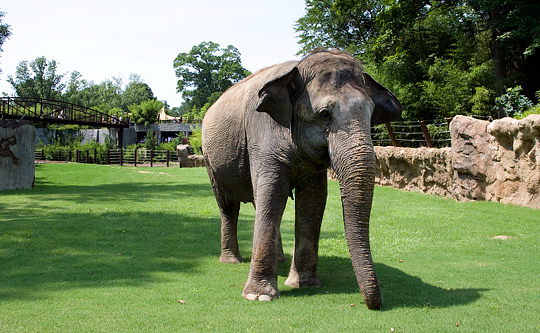