After 100 days and 123,039 votes, the giant panda cub at the Smithsonian's National Zoo received her name today. The cub's name is: Bao Bao!

Smithsonian Secretary Wayne Clough, Ambassador Cui Tiankai from the People's Republic of China and Assistant Secretary Kerri-Ann Jones from the U.S. Department of State's Bureau of Oceans and International Environmental and Scientific Affairs revealed her name at a ceremony celebrating the cub's first 100 days of life.

Bao Bao translates as "treasure" or "precious" in English. It was one of five Mandarin Chinese names that were offered for a public online vote from November 5 to November 22. The names were contributed by People's Republic of China ambassador to the U.S., Cui Tiankai, U.S. ambassador to the People's Republic of China, Gary Locke, and his family, giant panda keepers at the China Conservation and Research Center in Wolong, Sichuan, China, where the cub will live after she turns four years old, giant panda keepers at the National Zoo, and Friends of the National Zoo.

Bao Bao will make her public debut in January 2014. 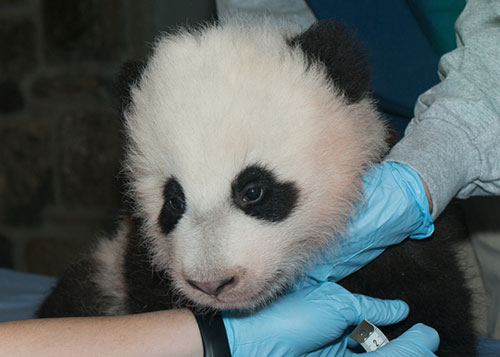