One of the keys to raising a healthy giant panda cub is mother's milk. Since her birth on August 23, Bao Bao has grown from 4.8 ounces to just over 20 pounds. She's packed on the pounds almost exclusively by nursing from Mei Xiang; she's only recently started to eat sweet potato and maybe a little bamboo. Zoo scientists can learn much from panda milk, and with help from keepers they are banking small samples from Mei Xiang. In this update giant panda keeper, Juan Rodriguez, explains how keepers collect milk samples from Mei Xiang.

With the birth of Bao Bao, Mei Xiang has been producing a lot of milk, so we developed a procedure for collecting the extra milk. This would allow us to not only study the nutrients in giant panda milk, but to have some milk stored in case future cubs were to need supplemental feedings. We knew collecting milk would be a complicated process, but we were fortunate enough to be able to see how our colleagues around the world do it.

Our trip to China in August 2013 allowed me and one of my fellow panda keepers to see firsthand how our Chinese colleagues collect milk from their lactating females. We also have the advantage of experience at the Zoo. Our keeper Nicole MacCorkle and biologist Laurie Thompson, were here for the birth of our last surviving cub in 2005.

Before we could collect milk from Mei Xiang, we needed a place to do it. So, we made a milking station. Initially, the concept for the milking station was developed by giant panda caretaker Marty Dearie. He designed an area along the bars of Mei Xiang's den where a metal lip juts out approximately 4 inches. Just enough for her to comfortably place her elbows on the lip. The bars also give us the added security of protecting our hands and arms during the milking session.

The first step in the milking process is to get Mei to walk over to the milking station. Once at the station the animal keeper signals her to stand up on her hind legs and place her front paws up as high as she can. Then a second keeper is begins collecting milk from her.

So far we have collected milk from her three times and have accumulated approximately 3 to 5 milliliters. 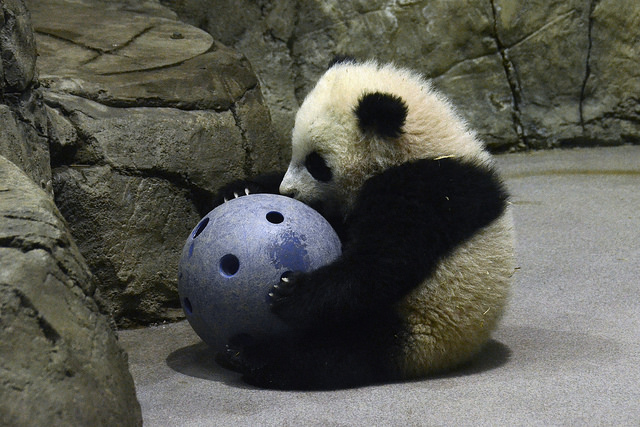