We know many of you miss watching Mei Xiang and Tian Tian on our panda cams. We want you to know we're working hard to get them up and running! As with many technical projects, we've hit some unanticipated delays.

Primarily, we're having issues with the new consoles and getting the audio system to work properly. We're waiting for a software patch from the manufacturer, which should solve the problem.

We have been testing the new panda web cam page internally and are still making changes to maximize the compatibility with the many computers and mobile devices that our web visitors use. We have run into several delays on the project with software bugs, network switch availability, and limited staff resources. We are hoping to have the cams live within the next few weeks. We're doing our best to hurry, and thank you for your patience!

While the upgrades to the panda cams, sponsored by the Ford Motor Company Fund, are underway, everything at the David M. Rubenstein Family Giant Panda Habitat has been business as usual.

As breeding season stretches into July, we are still waiting to find out if Mei Xiang is pregnant or pseudopregnant. All of the hormone and behavior data we are collecting clearly indicate that she is still in her primary hormone phase. She is showing normal behaviors and her hormones have not begun to rise for the second time this year (the first was when we performed two artificial inseminations in March).

When her hormones do rise, it means we will only have about 40 to 50 days until we find out if Mei is pregnant or not. Mei's behavior will change when her hormones begin to rise. Primarily she will build a nest when she enters her secondary hormone phase. She pulls stalks of bamboo and mulberry branches into her den when she is nest-building. However, she hasn't done that yet. Sometimes she will shred bamboo in her den —a normal behavior —but then defecate in the area — a clear sign that she is not nesting yet.

Although it's still too early to tell if Mei Xiang is pregnant or pseudopregnant, our veterinarians are performing two ultrasounds on Mei Xiang each week. That helps them track any changes in Mei's uterus.

Tian Tian and Mei Xiang have both transitioned to their summer eating habits. Both pandas prefer to eat bamboo leaves instead of the stalk now. 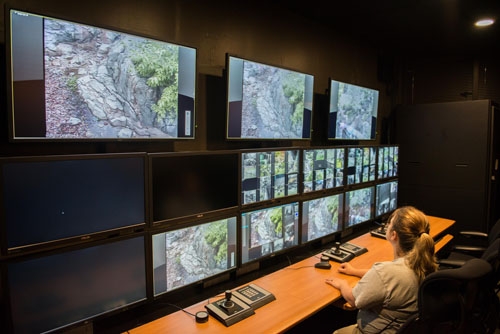