This update was written by keeper Nicole MacCorkle.

Everyone here in the David M.Rubenstein Family Giant Panda Habitat is eager for spring to finally arrive. Even the pandas seem less interested in the snow with each winter storm, spending less time playing in it than they did earlier in the winter. As the last of the winter's snow and ice finally melt away, we can look forward to Bao Bao playing in her yard in the very near future. The yards are cub-proofed and ready whenever she and Mei Xiang go out. But before Bao Bao can venture outside, we have to finish the construction on the fence between Mei Xiang and Tian Tian's outdoor panda yards, which will be very soon.

On some of the rare, milder days earlier this winter before the fence construction started, we gave Bao Bao the opportunity to venture outdoors, but Mei Xiang quickly herded her back into their indoor enclosures, never letting her explore past the patio area. Bao Bao has been busy inside, perfecting her climbing skills, which will come in very handy when she does go outside. She can now climb quickly and easily up to the highest parts of the rockwork by herself. With her increased motor skills, and ever-increasing size (just over 24 pounds at her last weigh-in), she is becoming much more independent.

Visitors may have noticed keepers wearing masks the past couple of weeks. Another unpleasant sign of the winter is the lingering risk of contracting influenza. This season has been a particularly bad one in the DC metro area, and we are taking precautions to be sure that our giant pandas don't contract it. The adult pandas do not seem to mind the masks, but Bao Bao is a little uneasy around them. For that reason, as we acclimate her to them, we are being less hands on with her than in the past.

We are so happy that all of our panda fans have been following Bao Bao, Mei Xiang and Tian Tian so closely! Now that Bao Bao is just over six months old we will be sending giant panda updates once a month instead of bi-weekly. We will continue to update our panda fans on major milestones, or special news as soon as they happen. In the meantime, Bao Bao's daily routine remains much the same these days - sleeping, playing and growing! 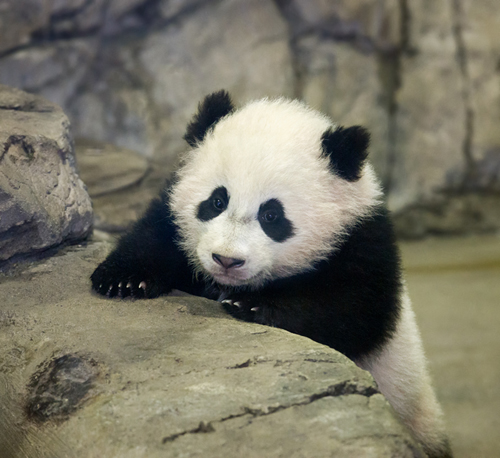