Both Mei's and Tian's appetites have decreased a bit this week. Tian is bleating more at Mei (a high pitched contact call), and she is vocalizing back, although her vocalizations are anything but friendly. She answers back with a low pitched moan, indicating that she's not quite ready for breeding, even though things are proceeding in that direction. In the coming days, we expect to see Mei's behavior shift, with her bleating at not only Tian Tian, but also at keepers, indicating that estrus is imminent. In the meantime, we are collecting daily urine samples and vaginal cytology slides, and carefully monitoring both Mei's and Tian's behaviors.

Mei and Tian have been spending more time interacting with each other at the mesh that separates their yards lately. Unfortunately, they have been choosing to do that near the back of the yards which has made it difficult to see them when they are outside at the David M. Rubenstein Family Giant Panda Habitat. Even if they may be difficult to see in the yards, panda fans can watch Mei and Tian on the panda cam, sponsored by the Ford Motor Company Fund, anywhere! 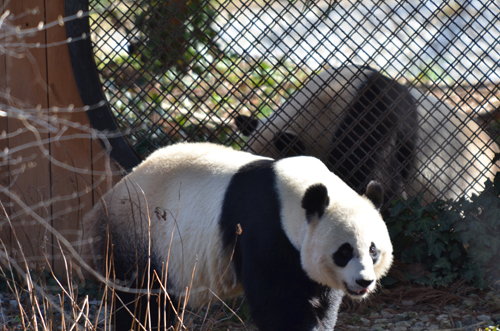