This past weekend brought lots of news for giant pandas around the world, and our three bears at the National Zoo. China's State Forestry Administration released the results of the latest giant panda survey, which found 1,864 bears living in the wild. That's an increase of 16.8 percent since 2003, which is great news for the species.

"As the only species of bear listed as endangered on the IUCN Red List, and an icon for species conservation, it's vital for scientists to keep monitoring the wild population of giant pandas. Every panda counts," said Steve Monfort, director of Smithsonian's Conservation Biology Institute. "We're encouraged that the wild population has increased 16.8 percent to 1,864 pandas and not experienced a decline since the 2002 census. Building upon four decades of collaboration with our Chinese colleagues, we're continuing to build scientific partnerships focused on habitat management, wildlife health and training the next generation of conservation scientists."

In collaboration with Chinese scientists, the Smithsonian's National Zoo and Conservation Biology Institute are conducting studies to save giant pandas, their habitat and the other endangered species that share it. We are committed to giant panda conservation and will continue to support animal breeding and the development of panda scientists both at the National Zoo and within China. High priorities include working in China to develop effective corridors between panda reserves, restoring habitats, addressing wildlife diseases and working with government agencies to build the capacity to improve management of all wildlife.

Meanwhile, 6,000 miles away from the mountains of China in Washington, D.C., big changes were afoot at the panda habitat. Bao Bao is now fully weaned and living independently from Mei Xiang, as she would in the wild at this age. Keepers have been working towards this for more than six months, always taking their cues from Mei Xiang and Bao Bao. Over the past several weeks the two became comfortable spending six hours or more apart each day. The final step in the weaning process was to get Mei and Bao Bao comfortable spending their nights apart. On Friday and Saturday a member of the panda team stayed at the panda house until 10 p.m. Each night, a keeper monitored both bears carefully to see if either was anxious while in separate enclosures. Just to be on the safe side, Mei and Bao Bao were given access to each other before the late night keeper left at 10 p.m. Finally, on Sunday night after two calm and uneventful nights, the panda team decided it was time to see how Mei and Bao would fare spending an entire night apart. Our panda biologist spent Sunday night in the panda house monitoring both closely, but once again neither seemed to mind being apart. Bao Bao even played with some of her new toys in the middle of the night. The keepers reported that the entire process went smoothly.

Our keepers will be nostalgic for the days when Mei and Bao Bao spent all of their time together, but they are very happy and excited for Bao Bao to continue to grow and thrive on her own. She has officially graduated from a cub to a juvenile panda! 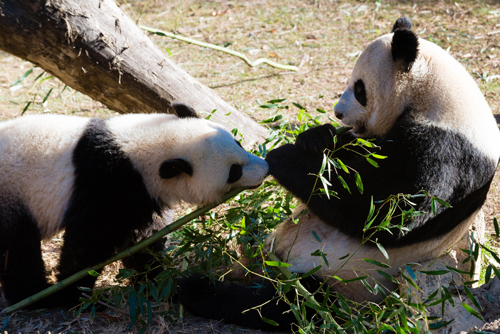