Maintaining the genetic diversity of giant pandas living in human care is a science?an exact science. SCBI scientist Jonathan Ballou determines how well-represented an individual panda's genes are in the captive population and makes breeding recommendations. In this panda update he explains how he does it.

Before scientists can determine whose genes are well-represented and whose genes are underrepresented, they have to know how many pandas there are. The giant panda studbook contains the genealogy of all 341 pandas living in human care. It is updated with the latest births, deaths, and moves of every giant panda. The pandas that are too old or unhealthy to breed are identified and removed from any genetic analysis. Two years ago, 30 pandas were identified as unfit for breeding. That left the genetic population at 303 bears.

At the Smithsonian's National Zoo—and at other zoos where there are only two pandas—the female can only breed with one male. In China, where there are many pandas living in the same facility, a female can breed with several males, or be artificially inseminated with sperm from several males. In cases where the paternity of a panda cub may not be known, we make assumptions about paternity. Although molecular genetic paternity testing is available, it usually takes a while and cannot always confirm who the father is. In 2011, there were about 60 pandas with uncertain paternity. But we have found a way to compensate for that.

The software we now use allows us to give probabilities of certain males being the father of the cub. For example if a female was artificially inseminated with sperm from male A and male B, we know that there is a 50 percent chance the father is A, and a 50 percent chance it is B. Our genetic calculations can then credit both A and B, but they only get one-half credit each.

After we have established the probability of paternity, we run the program to calculate the mean kinship values. The mean kinship of an individual is the average kinship (a measure of genetic relatedness) between him/herself and all the pandas in the genetic population. Pandas with lots of relatives have high mean kinship values. They are not considered as genetically valuable because their genes have copies in their relatives. They are not genetically unique.

Tables of the MSI values for each potential pair are distributed to the institutions holding the pandas. Based on the curator's knowledge of the age, behavior, health of the pandas, and their MSI ranking the institutions then select which males to be bred with which females. They usually pick several different males for each female so they have options come breeding time. 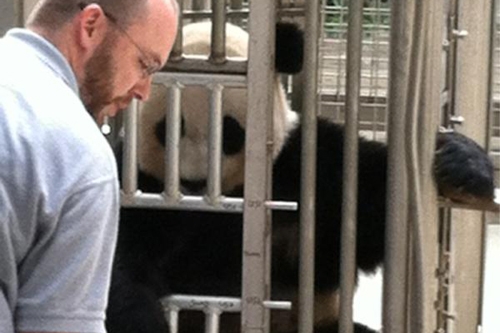