Mei Xiang is now venturing outside for breakfast, and is spending up to two hours away from the cub at a time. As the cub matures that time will increase, and eventually mother and cub will be comfortable spending many hours away from each other. That will also give us more time for training sessions with Mei and for checks on the cub, so cam watchers may notice that the cams may be focused on Mei when she's away from the cub. We are using Mei's time outside to do regular cub exams and weigh and measure the cub. Last week, we noticed that the cub is even sleeping through the exams! This makes sense given Mei's attentive maternal care. She nurses the cub before she goes outside for breakfast, allowing the cub to rest back in the den during her departure. Mei Xiang even took that opportunity to take a nap herself Thursday, enjoying the cool fall air on her favorite resting spot on top of the grotto in her yard.

It has come to the keepers' attention that some panda cam viewers have been concerned that the cub could get stuck between the bars in the den. The bars that are in the den are the same as the ones that were in the den for Mei's first cub, Tai Shan, they are just positioned differently. To further alleviate any concern, we measured the bars Friday morning—they are raised 6.4 centimeters from the floor, and the space between the bars is 8.3 centimeters. Although the camera angle may be deceiving, the cub's head is larger than the width of the bars, thus preventing her from getting stuck. Our cub's health and well-being are our primary concern here, and we are happy that the panda camera viewers share our concern for our little one! 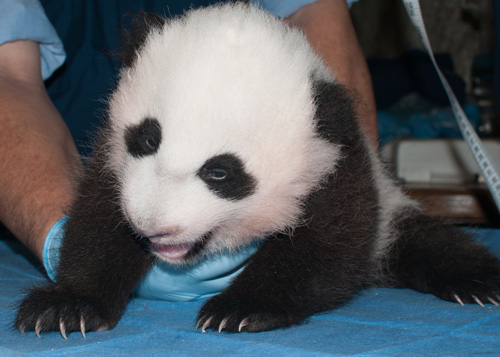