Starting July 2, gray seal pup Rona will be on exhibit! Read about her progress in the latest keeper update from Chelsea Grubb.

As Rona grows, are you seeing her personality develop?

Rona is a really amazing animal, and we are so lucky to be able to watch her develop physically, socially and mentally every day! She is an incredibly fast learner, playful and has a VERY healthy appetite!

Keepers equate her behavior to that of a typical two year old child. She is curious about anything new in her pool (including other seals) and seems to enjoy testing limits and boundaries. Occasionally, if she wants more fish, she will make a loud moaning sound at the keepers to let them know exactly what she wants, very much like a demanding child! She is always intrigued by what the adult seals are doing and constantly watches them.

What's in her diet?

Rona is consuming 2.5 kilos (5.5 pounds) of a mixture of herring, mackerel, butterfish, capelin and squid. Our animal care, nutrition and animal health departments have worked seamlessly together to constantly evaluate her growth, weight gain and nutritional needs since birth, and will continue this throughout her lifetime. Rona weighs in at 67 kilos these days. That's just shy of 150 pounds.

How is Rona’s training coming along?

Rona started her formal training program at about six weeks old, about three weeks after she was weaned onto fish. Keepers use a whistle to indicate when an animal has performed a behavior correctly, known as a "bridge." That's the first thing Rona learned.

To teach her the bridge, the keepers would blow a short blast on their whistle, and then offer her a fish immediately. This taught her that when she hears the whistle, fish is on its way!

Once she understood this concept, keepers first concentrated on teaching her manners. She learned to "target", which means she touches her nose to a keeper's closed fist until bridged. This is the most basic behavior a seal can learn, and is the foundation of almost all the behaviors that she will eventually have in her repertoire.

The seals at the National Zoo participate in their own health care voluntarily, which means being comfortable with keepers and vet staff touching them all over their bodies. Rona is in the process of learning how to accept tactile interaction from people, which will evolve into more complicated behaviors like voluntary ultrasounds, blood draws, nasal swabs, and radiographs, among other medical behaviors. She is also learning how to accept eye drops, as eye issues can be somewhat of a problem as seals age.

Having a seal move voluntarily around a space is critical to their management in zoos, so Rona is also trained to follow keepers, go to the water when asked, and stay on a "station" while keepers move around her.

Manners are important for a baby seal to learn, but having fun is also high on the priority list! She is learning to spin on land an in the water, vocalize, and will learn many other fun behaviors in the future, such as waving, grooming, porpoising and high fives.

In the last update, Rona was in the holding pool by herself and intros were taking place (through a mesh barrier). Who has she met thus far, and how do they get along?

Rona has met all the seals by spending a few weeks in the holding pools with them learning how to socialize appropriately (read: stay out of the adults' way!). The keepers introduced her to one adult at a time so that she could figure out the personality of each individual. The adults mostly ignore Rona, and generally just let her know when she is in their space a bit too much. They do this by head darting, opening their mouths, vocalizing and flipper slapping. Rona figured out what all these behavioral cues mean very quickly and seems to respect, except when she is feeling a bit feisty!

Whenever she met a new seal, she would first lie on the deck of the pool, stick her face in the water and watch the adults swim. When she got brave enough, she would enter the pool and follow the adult as they swam, very careful to keeper her distance. Every now and then she would get too close, but again, the adults are really good at giving her fair warning. She has recently discovered that blowing forcefully out her nose is another form of communication between seals, and now does it frequently.

What enrichment do you give Rona?

Right now, the most enriching activity for her is interacting with the rest of the seal colony.

We'd like to give a special "thank you" to the folks who donated to the Enrichment Giving Tree as part of #ZooEnrichment week. Thanks to your generosity, Rona (and all the Zoo's animals) have their pick of toys to play with! Her favorite toys are Frisbees, balls, buoys, and weighted toys among others.

When will she be on exhibit?

Having Rona under behavioral control is critical before moving her out into the exhibit. For that reason, and to introduce her to the other seals in a more controlled environment, she was kept in the off exhibit holding area. Now that she has met all the seals and is a wonderfully behaved baby seal, she is ready to have adventure in the exhibit pool!

I want to help gray seals! What can I do?

Visit the Zoo to learn more about gray seals and to see these beautiful creatures up close!

Your help can ensure the future of gray seals not only at the Smithsonian's National Zoo but in the wider, wild world! Text NATZOO to the number 20222 via cell phone to donate $10 to our conservation fund. 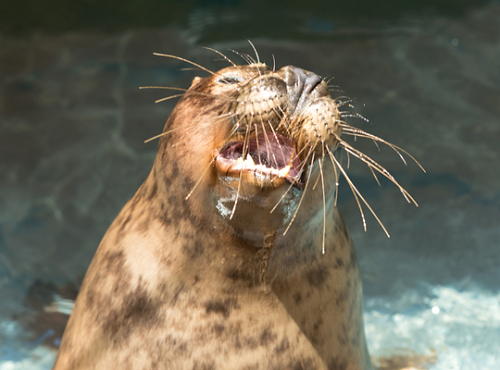 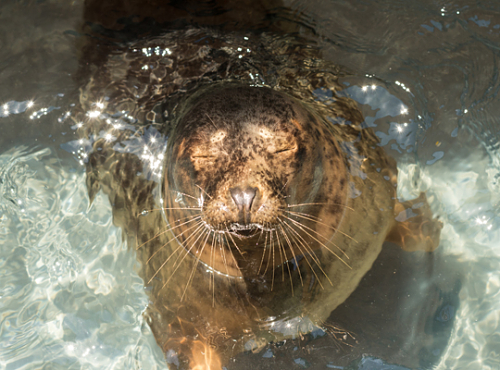