The Zoo has a new troop of seven monkeys! It's a mixed-species group of guenons. Learn all about our new monkeys, and about guenons, in this Q&A with primate curator Meredith Bastian and keepers Alexandra Reddy and Elliott Rosenthal.

"Guenon" is the name of a group of monkeys that is the largest and most diverse primate group in Africa. Generally speaking, a guenon is a member of a diverse group of African (or Old World) monkeys, which include a wide variety of over 20 monkey species. Guenons occupy a wide geographic range and live in a wide variety of habitats.

What species of guenons do we have here?

What's unique about these two species?

What is your favorite fun fact about both Allen's swamp monkeys and Schmidt's red-tailed monkeys?

Like many monkeys, guenons have large cheek pouches where they will often store extra food. They can fit almost as much food in their cheeks as they can in their stomachs!

Both species of guenons at the Zoo also demonstrate excellent problem solving abilities. Swamp monkeys in particular are extremely curious, even by monkey standards. They have nimble hands and are adept and taking things apart. Both the red-tailed and swamp monkeys have very dexterous fingers and are inquisitive about new objects introduced to them.

The monkeys have a real range of personalities! Tiko, the male red-tailed monkey, is not yet accustomed to the orangutans that are housed nearby, so he seems to be more alert than some of the others. On the other hand, Nub Armstrong, the male swamp monkey, is generally very laid back.

Kinah, a female and the smallest of the swamp monkeys, is very focused on humans. She is clearly the biggest crowd pleaser and will come right up to the glass to greet members of the public!

The Zoo's new monkeys will share an exhibit because guenon species tend to do very well when housed together. In the wild, many guenon species are highly tolerant of one another socially. This helps the monkeys find food more easily and have greater protection than if they ranged on their own.

The two groups of guenons here at the Zoo also originally came from the same exhibit in San Diego, so they are already familiar with one another.

How are introductions between the two species progressing?

The two species will not be reintroduced to one another for another week or two. Though we don't expect any challenges to introduction, we are allowing each group to gain familiarity with all their new exhibit spaces first.

What is the best time for visitors to see the guenons?

At least some of the guenons should always be visible in their indoor enclosure and/or outdoor yard at Think Tank. Keepers may clean enclosures in the morning, but if there is a keeper cleaning one of the guenon enclosures, there will be guenons viewable in the other space.

When the weather is nice, monkeys will often be given indoor/outdoor access overnight, so guests may be able to seem them in their yard on many evenings. 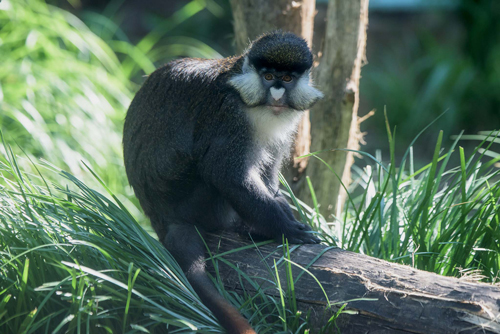