The six lion cubs at the Great Cats Exhibit are growing fast and their husbandry training sessions are in full swing! Parents Luke, Naba and Shera have their paws full with the rambunctious cubs—but it's our animal care team's challenge to care for the entire pride. Curator Craig Saffoe and keepers Rebecca Stites and Kristen Clark reveal what's new with the cubs in the latest Q&A! 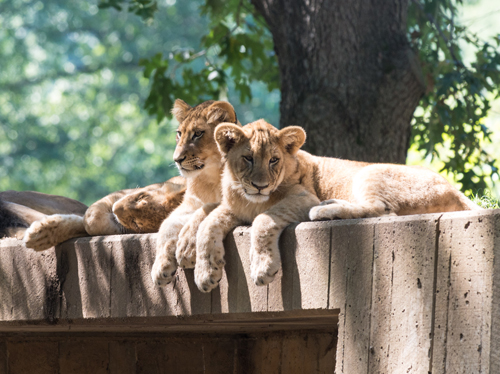 How do the cubs interact with one another and their parents?

Our lion cubs are doing everything that cubs ought to be doing: wrestling, playing, mock fighting. These are rough-and-tumble kinds of behaviors that are preparing them for being adult lions. They're at that age where they're learning more or less how to hunt.

We see them chasing their moms in particular. If you watch them play, you'll see that they're jumping up and they're pawing and kind of biting at their moms' rear end. That's how they hunt large animals in the wild.

We're seeing far less nursing, almost to the point where they're completely weaned. Usually the cubs are weaned between 7 and 9 months of age, so we're right around that time.

What training behaviors have the cubs mastered?

I train Amahle, Jumbe and Eva. Target training comes easy to these guys now, and they have mastered the behaviors of sit and lay down as well. We are now working on more challenging behaviors.

The two behaviors I'm focusing on are opening of the mouth and body positioning for injections. The cubs chew everything from their cow bones to logs and rocks. It's very possible that we'll notice a few cubs sustaining damage to their baby teeth in the coming months which could mean a visit from the dentist. It's important that we can regularly get a good look inside their mouths. If they need any dental work done, anesthesia would be required so it's important to prepare them for injections.

That being said, my experience has been that training a lion to open their mouth (without biting the cage mesh) is one of the most challenging behaviors to master—even more challenging than training for injections—but Jumbe seems to be catching on pretty quickly!

Amahle has been doing very well with body positioning and I've begun desensitizing her to being lightly touched on her outer thigh with a plastic pole. These are the first steps towards hand-injections! Eva is just starting to work on "line-ups" and "open mouth" but we continue to practice simple behaviors such as sit and down. As her excitement for food increases, we'll master the more challenging behaviors.

Desta has back slid in her target training slightly and I'm trying to break her of the habit of swatting at the target rather than touching her nose to it. She does "open mouth," "sit," and "down" very well. I've been working on the "line up" behavior for voluntary injections, but she is a little rough on getting her body position correctly. I've been trying to break down that positioning into smaller, more easily mastered parts to set her up to succeed.

Chisulo can be a bit grumbly if he gets frustrated and doesn't understand what I'm asking for. He is the cub that contracted infectious arthritis earlier in life, so I'm hoping to work with him on behaviors that will allow for standing radiographs to monitor that front leg as he continues to grow. He is slowly starting to understand that "open mouth" does not mean, "stick out your tongue and lick." He is proficient at sit and down, and is making good progress on the line up position for voluntary injections.

Shaka has great focus and always seems excited when I pull out the target and feed sticks. He is the most vocal of the three cubs I work with, so getting him to open his mouth is not a challenge! He has mastered sit, down, open mouth, targeting, and is doing well at the early stages of the line-up behavior.

Who's the most challenging to train?

For me, Eva is the most challenging to train. She has a lot of great energy that I would have expected to be beneficial, but she has a short attention span and the least amount of food motivation. If I delay in her training once I get the cubs separated from one another, it's hard to get her started at all. I have to be quick and know exactly what my goals are for her during any given training session because I know I'm only going to be able to work with her through a few behaviors.

Amahle and Jumbe are the easiest, but are excelling in different behaviors so I'm building on their strengths.

I'm fortunate that the three cubs that I train are motivated for food! Out of the three, Desta is probably the most challenging to train because she seems to have a shorter attention span than the two boys. Once I have her attention with meat, however, she is usually focused for at least a few minutes — as long as she is not separated from the rest of the pride for too long.

Chisulo and Shaka are so motivated for food — boys will be boys! Unless there is a lot of other activity in the building, I can usually count on their full attention. Shaka is the most proficient of the three cubs that I train.

What do you enjoy most about training the cubs?

My favorite thing about training is that it's a great opportunity to build a positive relationship with each of the lions. In a way, we get to develop a language with each other through movement and sound. Being able to connect and communicate is very special. Even after a busy morning, I feel a sense of calm come over me during a training session.

When I train the cubs, I feel very connected to them as individuals. This connection will only get stronger as they get older, and will stay between us as long as they remain at the National Zoo. The training we are doing with the cubs will travel with them for a lifetime.

There is something very powerful about this bond, as it is based on trust. Even though the cubs are still young, you can feel a connection when they look directly into your eyes during a training session. I really feel that training is such an essential part of husbandry, and only improves our level of care of our animals.

The cubs range in weight from about 83 pounds to 108 pounds.

Is there a 'leader' among the group of cubs?

Not yet. We are starting to see them break away from each other in their weight, which means those who are getting bigger are probably hogging more of the food (they are still being fed communally) which makes sense. It is likely that those who are growing faster are a little more dominant just because they're bigger!

The cubs' older brother Baruti enjoyed swimming in the moat. Do any siblings follow in his footsteps?

For how much longer will the pride remain together?

We separated our last litter (born in 2010) around the 13-month-old mark. If everything goes as that litter went, we'll be separating the pride into groups by early 2015. Luke has been separated from the adult females (but still gets time with all cubs every day) to ensure that no breeding occurs. We will have to await the next Species Survival Plan recommendation before we can breed them again.

What is the next milestone for the cubs?

Their first birthdays on January 24 and March 2!