Lion Q&A: How do you draw blood from an African lion?

For the first time in this pride, Zoo veterinarians have successfully drawn blood from a lion—a juvenile male named Jumbe—while he was awake. Keeper Rebecca Stites reveals what this means for the health and future of the lion pride in the latest Q&A. 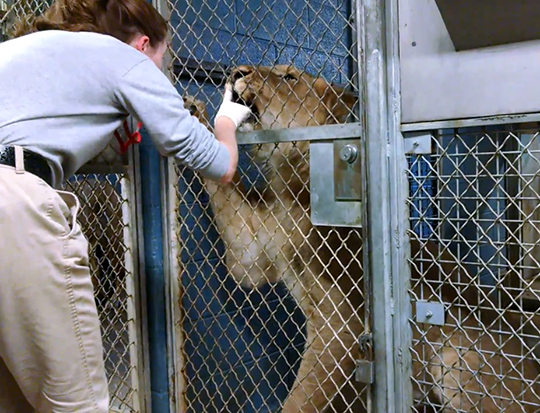 How do you draw blood from an African lion? With training and meatballs!

This story appears in the January 2016 edition of National Zoo News. Want animals in your inbox? Sign up for our e-newsletters.

Why do you train the lions for blood draws?

Obtaining blood samples is a great way to help our animal care and vet teams monitor the cats' health. All of the Zoo's lions participate in blood draw training, but Jumbe is the first member of our current pride to allow us to successfully draw blood while awake!

If they didn't participate in this kind of training, we would have to put the cats under anesthesia every time we needed a health assessment, which can be stressful for them. Instead, we use positive reinforcement training; every time they do a behavior asked of them, they're rewarded with meatballs. Jumbe in particular is a very enthusiastic eater and is very willing to work for food!

Why is this training important?

Now that we've learned that our lions will tolerate a blood draw, it is possible that it could reduce the number of physical exams that require anesthesia. For example, when they leave for other zoos, the receiving facility usually requires specific health related tests. Some zoos may request a visual exam with a blood chemistry screening. Normally, we would have to put a lion under anesthesia to get blood. If the animal is willing to voluntarily participate in a blood draw, then it would not be necessary to anesthetize him/her. Other facilities may require additional screenings that require anesthesia.

Additionally, blood screenings are important for monitoring various known health conditions. For example, the Zoo's elderly lion, Lusaka, who died in 2010 was undergoing chemotherapy after a cancerous tumor was removed from her back. Regular blood chemistry screenings were essential for monitoring her body's response to the drugs, to ensure they were not having a negative impact on her body.

What behaviors do you train for blood draws?

Before we can give Jumbe an injection or do a blood draw, he first has to do a behavior that we call "lining up." I will point from left to right, and this is his cue to lay down with his head and rear parallel to and pressed up against the mesh. If he needs to move a little closer, I'll give the floor a little tap and say, "move in." Another visual cue that we're about to do this training is a hook, which I use to guide his tail from his side of the enclosure underneath the mesh barrier to my side of the enclosure. At this point, Jumbe is so well-trained that the moment I kneel down, he automatically goes into the line-up position and will shoot his tail under the mesh!

With any cat, if you touch their tail, they will jump around or flinch. So, part of this training is getting them acclimated to having us touch their tails and having their tails manipulated. We always let them see the tools we're using before training begins; that becomes another visual cue of which training session we're about to do. We also give them a verbal cue and say, "stick!" And, sometimes, the lions will move away when you say "stick" because they anticipate what's coming!

With this training, it's always the animal's choice to participate, so if they decide that they want to walk away they always have the option to do so.

How often do you practice this training?

We practice the "line up" training several days of the week to ensure that the positioning is just right. About once a month, a vet tech joins us for the training to help the animals get acclimated to having a second person there and get used to the sight of the syringe. Unless a cat has a particular vaccine due, we practice with saline to get them used to the sensation of the injection.

How does Jumbe react to the training?

For the cats, training seems more like a game or an activity. Their faces are so expressive; I can see when they're thinking about which behavior I'm asking them to do. Jumbe, especially, gets really excited when we're about to do a training session. Before we even begin, I'll feed him up to half of his diet so that he's focused and ready to go.

Jumbe is pretty laid-back compared to some of his siblings. I brought his tail out from underneath the mesh, and our vet technician felt for the vein. He didn't move or flinch when we did his blood draw at all. He lay still and I rewarded him continuously with meatballs. Once vets were finished drawing blood, I blew my whistle to let him know that we were finished with the behavior and he was in for a big reward!