This update was written by animal keeper Kristen Clark.

Today, the cubs met face-to-face with Luke for the first time! Introductions are always tense the first time you do them, but we always try to base it on positive behaviors we've seen in the past and experiences we've had in the past. We've introduced Luke to his cubs though a mesh "howdy door" prior to today's meeting. All lions (dad, moms, and cubs) were interested in one another and their interactions were positive during those meetings, so we decided it was time to try putting them together in the same shared space. We've learned that it's better to always err on the side of being cautious and conservative when it comes to introducing the cubs to their dad. Because lions are large carnivores and we cannot go in the enclosure physically to separate them, we need to trust our instincts and rely on the positive behaviors we've seen so far. There's no harm in taking these intros very slowly. It seems like the progress we are making is small and incremental, but that's the way we have successfully introduced the previous pride.

At first, Luke seemed a little apprehensive. He squabbled at the cubs a little bit and pawed at the older litter when they were a little close to his tail—more than he was comfortable with. Luke did bare his teeth, but it was a calm way of telling the cubs that he wasn't in the mood to play! The younger cubs got this message right away, and ran over to mom Shera and began to nurse. The older cubs are a bit more brazen and stayed on either side of dad. They continued to try to sneak up on Luke's tail and test the waters! Luke very well could have jumped up on the bench to get away from the cubs, but he chose to lay on the floor with them instead and let them play around him.

The entire time, Naba and Shera stayed in the adjacent den and kept their eyes on what was going on. There was not much vocalizing between the adults, which shows that they were comfortable with Luke's actions towards the cubs. Neither female felt the need to get up and roar at Luke for any sort of infraction. Naba, as the dominant female of the pride, gave off a "casual" vibe. While she looked calm and relaxed, she was definitely watching everything that was going on. She hung out by the door and lay there with her head cocked to one side. All of her focus was on what Luke was doing.

After about a half-hour of being together, we decided to close the door between Luke and the cubs. All of the interactions we had observed were calm—there were no aggressive vocalizations from Luke, Naba, or Shera. Everybody self-separated; Naba moved away to an adjacent enclosure with her cubs, and Shera was nursing her cubs, so it seemed like a perfect time to end it—while all was calm. Luke was also relaxed, but as soon as we opened the door he eagerly ran outside to have some Dad time by himself.

Today was a very positive experience for everybody, and we hope that that will continue. From here on out, we will continue these introductions and gradually increase the amount of time that the pride is together. We will start inside, and then build up to putting the entire pride together outside after all cubs pass their swim reliability test and get their vaccinations. 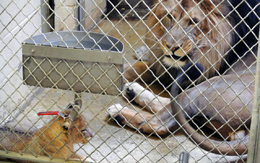 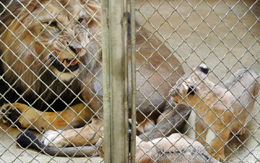 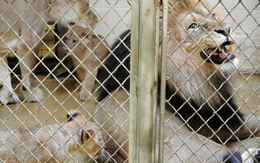 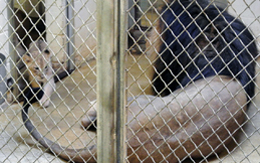