On Father's Day weekend, Shera's four cubs made their big debut at the Great Cats exhibit! Now, visitors can see the whole pride every day between 11 a.m. and 1 p.m. weather permitting. Animal keeper Rebecca Stites gives us the latest update on the cubs.

The cubs have already passed several milestones (the swim test, meeting dad, and so on). What's the next big 'event' they have to look forward to? 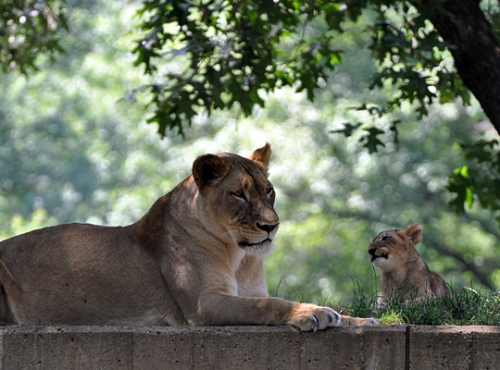 Soon, all six cubs will have names!

My fellow keeper Kristen Clark and I selected the names for two of Shera's cubs. We've named her daughter with the shave patch on her left rib Amahle, which means "beautiful one" in Zulu. The name and its meaning are a perfect fit for this beautiful, confident cub. For her son with the shave patch on his right rib, we've selected Chisulo, which means "strength of steel" (Southern Africa/Republic of Malawi). We felt that this name was fitting because of the strength he demonstrated in overcoming the illness that caused his limp.

Shera's other two cubs with shave marks on their left and right hips will soon be named by the Zoo's Board of Directors.

Naba's cub with a shave mark on her right shoulder was named Eva in honor of Eva Pell, the former Undersecretary of Science for the Smithsonian. Eva's sister with the share mark at the base of her tail received the name Desta, which means "joy" (Ethiopia). Zoo officials bestowed the honor of naming her to a donor who has been very generous to the Zoo.

Chisulo's limp and lack-of-weight-gain caused some concern back in April. How is he doing?

Chisulo not only recovered from the illness that was causing him to limp, but he is thriving! Keeping this guy quiet and calm during his recovery was about as easy as it would be to keep a Labrador puppy quiet and calm. Despite his temporary disability, he continued to romp and play with his siblings. Although he didn't gain weight during a one week period, his appetite did not appear to wane. It's possible that his body was using the energy that he was consuming to help fight off his infection. As his infection wore off, his body weight shot-up. He's now the largest cub from his litter!

Naba's litter weighs about 55 pounds, Desta being a bit larger than her sister, Eva. Shera's cubs weigh about 40 pounds on average, but Chisulo weighs the most at 44 pounds!

At what age do the cubs become too large to handle?

We are usually hands-off with the cubs by 4 months of age. By this time, the cubs protest being handled by keepers and by their mothers. They are also beginning to show an interest meat and are willing to participate in short training sessions. One of the first things they learn to walk onto the scale for a meatball reward so that we no longer have to carry them onto the scale outselves.

When cubs are acclimating to the yard, what behaviors can visitors expect to see?

During the first day in the yard, the cubs were a bit nervous. They carefully explored their new surroundings. The yard is more complex for a lion cub going outside for the first time than one may think. Unlike vulnerable wild lion cubs who experience the great outdoors at birth and naturally acclimate to their world, Naba and Shera's cubs acclimated to living inside the lion building.

Going outside means being exposed to grass, dirt, rain, a giant water moat, a whole variety of new smells, boulders, trees, and wildlife that enters the yard (ducks, squirrels, snakes, chipmunks) all at once. After a couple of days they began to let loose and work on conquering the levels of the yard. The cubs figured out how to climb up three of the four tiers the first time they went outside. The Fourth tier presented a challenge though. After the first week, the cubs began figuring out how to climb to the top tier.

Visitors will likely see lots of play behaviors that relate to their natural predatory instincts. The cubs will stalk, chase and pounce on logs, rocks, each other, and their parents. Visitors may even see the cubs teaming up to tacking one of their parents, as if they are taking down a cape buffalo!

Have the cubs ventured into the water?

The cubs have figured out that they can get a cool drink of water from the moat, but have not intentionally entered the water for play. Lions don't typically enjoy the water the way that tiger do. Wild lions sometimes use water to their advantage when hunting by driving their prey into the water. We'd love to see one or more of the cubs enjoy the yards water feature the way their older brother, Baruti, did. It's likely that most entries will be accidental though.

When they're outside, do the cubs stick close to mom/each other?

The cubs are beginning to show confidence in the yard. Visitors may see them exploring an area of the yard alone, but spend most of their time playing with a sibling or parent. It does not appear that the cubs are sticking with each other or with their parents due to lack of confidence, but rather because it's more fun to play with a buddy than to play alone. 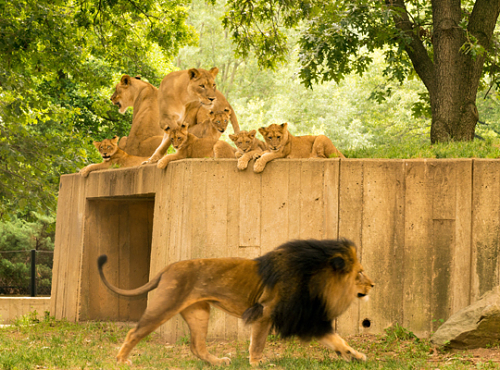 Keepers waited a few weeks before putting Luke outside with the cubs. Why?

We wanted to establish a shifting routine with the cubs before we let them go outside with Luke. Like a true gentleman, Luke waits for Naba and Shera to go inside before he enters the building. After cubs were born, Luke became conditioned to his mates shifting inside long before he was called in. This was because Naba and Shera regularly came in during the day to tend to the cubs—a responsibility that Luke did not have to share.

The problem with being conditioned to coming in last is that it difficult to convince Luke to come inside if cubs are lagging behind. It takes quite a bit of time for the cubs to learn the shifting routine. Additionally, cubs typically figure out how to go up the yard tiers but do not always have the confidence to climb down them. If Luke does not come inside, keepers are not able to go into the yard after a cub. After the cubs learned to shift reliably, we started giving Luke access in the yard with the rest of the pride.

Does Luke interact with these cubs differently than the litters born in 2010?

The only difference between Luke's interactions is that he seemed to know what to expect. He was less curious about the third and fourth litter of cubs than he was the first and second. He also showed a greater level of confidence with these litters during initial introductions than he did when being introduced his first two litters. He seems to be enjoying their company during the day, but also appears to appreciate some alone time after they go inside for the day.

What enrichment do you give the cubs?

Before the cubs began receiving access to the yard, the cubs enjoyed playing with plastic balls, catnip balls, rope toys, and even pinecones and logs that we brought in from the yard. Now that the cubs are going out, the yard itself provides the cubs with tons of enrichment opportunities. Everything is so new and exciting to them. They love to play with the fallen tree branches and twigs, enjoy scratching the tree logs and climbing on the stumps. There are new smells all around them outside. They even had their first encounter with a resident snake!

Soon we'll start to introduce them to hay-stuffed burlap sacks and cardboard boxes. These items may not sound thrilling, but lions love the shred these items apart and play tug-of-war with them.

We'd like to give a special "thank you" to the folks who donated to the Enrichment Giving Tree as part of #ZooEnrichment week. Thanks to your generosity, our lion cubs (and all the Zoo's animals) have their pick of toys to play with!

Are they eating solid food?

The cubs started sampling their mothers' diets when they were about 2.5 months old. They now chow down an 11 pound feast of ground beef, communally, seven days a week. They also receive cow bones to chew on twice each week. Soon, they will be introduced to whole prey.

Have the cubs started training?

Additionally we are working on basic behaviors such as target, sit, lay down, and walk onto a scale. As they progress, the cubs will also learn to present their paws for paw pad inspection, open their mouths for inspection with a flashlight, and position their bodies for hand-injected vaccinations.

Will the lion cub cam return?

The outdoor Lion Cam was removed while construction of the new safety barrier was taking place. Now that the construction is finished, our IT team is working hard to get the Lion Cam back up and running. If the reinstallation is successful, we will be sure to update you via our Facebook, Twitter, and Instagram pages. We hope to move the cameras that currently show Naba and Shera's dens to their current enclosures. However, that may not happen for some time.

I want to help African lions! What can I do?

Visit the Zoo to learn more about lions and to see these beautiful creatures up close!

Your help can ensure the future of lions not only at the Smithsonian's National Zoo but in the wider, wild world! Text NATZOO to the number 20222 via cell phone to donate $10 to our conservation fund.