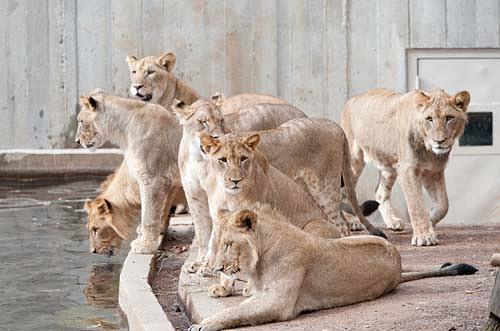 Lion separations have been going smoothly, and we are ready to take the last step!

Several weeks ago, Baruti, Aslan, and John started spending the night in their own set of dens, next to the females. Luke had moved a little farther away from the rest of the pride, but has been able to walk through a chute during the night to visit with the juvenile males and females at their respective howdy doors. During a few hours each day, our juvenile boys were reunited with their mother, aunt, sisters, and cousins in the yard. Without any signs of broken hearts, we felt the pride was ready for us to initiate part two of the separation process.

On February 6, the juvenile boys had their last day outside with their mothers—although they continued spending a few hours each morning with their sisters and continued to spend time with Luke. Since then, Naba has been indifferent, but Shera appeared relieved and relaxed. No surprise—Shera's been showing signs of aggression towards the boys for several weeks now—a signal that she's ready for them to move on!

Monday (February 20), we felt that the lions were ready to take the final step. The juvenile females will now be kept with Naba and Shera until we receive recommendations on which zoo to send them. Our goal for the juvenile males is to keep them with Luke for as long as we can. As the young males continue to develop and mature, there will come a time when Luke begins to view them more as adult male competition and he will no longer tolerate their presence. At that point we will be forced to separate them from their father so that nobody gets seriously hurt.

So when you visit the lions during the coming weeks, you'll either see Naba, Shera with the juvenile girls outside or you'll see Luke and the juvenile boys outside (and there is the chance that you'll see Luke alone outside or the three juvenile males outside). Some days you may see both groups outside, but in separate yards. We'll be sure to keep you posted about changes among the pride.