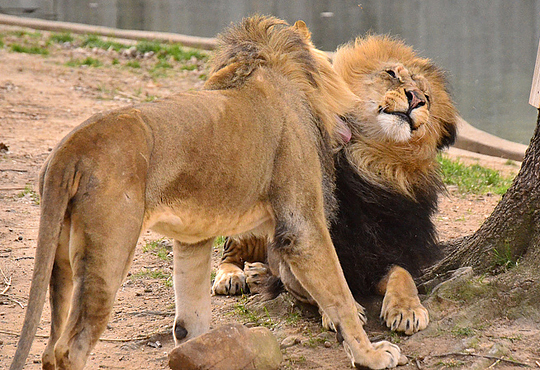 Things in the lion house have been fairly quiet this winter. When temps drop to freezing, we usually let the lions decide where they want to play throughout the day. With the colder air moving into DC this January, the lions have been choosing to hang-out inside for much of the day. We do have a few updates that we are excited to share though!

A couple of the keepers from Calgary Zoo visited in early January and reported that Aslan and Baruti are doing well. They made their official debut to the public on January 3. It sure is cold in Calgary right now, but the boys are having fun romping around in the snow. Even with all their charm and good looks, it has not been an easy task to win over Calgary's resident lionesses. Although it has been a slow process (as is to be expected when introducing two social groups of lions), Zoo visitors there have delighted in catching a glimpse here and there of all four lions hanging out together! Good luck to Calgary Zoo as they continue introductions!

We have also received word that Zuri and Fahari are doing well and enjoying the mild weather in Santa Barbara! Their names have been changed to Neema (Zuri) and Kadi (Fahari). Before long, the keepers in Santa Barbara will be introducing these girls to their resident male, Chadwick.

Additionally, we have some news about a future move for Lusaka and Lelie. The lion Species Survival Plan (SSP) has recommended that they move to the Buffalo Zoo. We've spoken with Buffalo and all agree that this will be a wonderful move for our girls! We're not packing their bags just yet though—we'll wait until spring before transporting them.

Last but not least, we have some news about John, too. The lion SSP has recommended that John be introduced to a lioness that is currently living at the St. Louis Zoo. The questions are where and when will they meet? John won't be going to St. Louis and the lioness from St. Louis won't be traveling to DC, so the SSP is working on locating a future home for the pair.

Although the winter weather is keeping most Washingtonians indoors these days, spring will be here before we all know it. We've made a change to our "meet-a-keeper" schedule. Instead of our usual chit-chat around the lion/tiger circle, we have started offering enrichment demonstrations. Join us on Mondays, Tuesdays, and Thursdays at 1 p.m. for enrichment demonstrations (weather permitting) and stick around to ask any questions you may have!