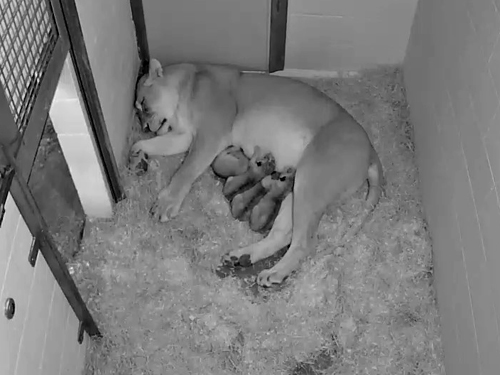 March came in like a lion—four lions, to be exact— as 9-year-old African lion Shera gave birth to a litter at the Great Cats exhibit at the Smithsonian's National Zoo. Their delivery March 2 spanned a seven-hour period, from 8:27 a.m. to 3:17 p.m. These cubs are the second litter for Shera and the fifth for 8-year-old father, Luke. Recently, Luke also sired 10-year-old Nababiep's two female cubs born on January 24. Animal care staff watched Shera give birth via a closed-circuit webcam and continue to monitor the family. The first cub was born at 8:27 a.m. and appeared active and healthy. At 9:03 a.m., Shera delivered her second mobile cub. The third cub was born at 11:09 a.m. and the fourth at 3:17 p.m. The Zoo's animal care team has been closely observing the family throughout Sunday and Monday's snowstorm. All four cubs appear to be nursing, moving and vocalizing well.

"Shera successfully raised her previous litter of four in 2010, so we're cautiously optimistic that these cubs will thrive," said Kristen Clark, and animal keeper at the Great Cats exhibit. "Like any new mom, she needs some peace and quiet to bond with her cubs, so we're giving her the solitude she needs. From what we've observed on the cam, her behaviors are right on point, and there's no need for us to intervene."

The National Zoo participates in the Association of Zoos and Aquariums' African Lion Species Survival Plan, a program that matches individual animals across the country for breeding in order to maintain a healthy, genetically diverse and self-sustaining population. The birth of these cubs marks the next step in building a pride at the Zoo. The pride social structure makes lions unique among the great cats, many of which are solitary animals. African lion populations in the wild have dwindled by 30 percent during the past 20 years as a result of poaching, disease and habitat loss. They are considered a vulnerable species by the International Union for Conservation of Nature.

"At this time, both mothers have a den space to bond with their cubs that is separated from each other and Luke," said Rebecca Stites, animal keeper. "In the wild, a lion may take up to six weeks to introduce her cubs to the rest of the pride, so we are emulating that process. Once Shera's behavior indicates that she's comfortable with the cubs meeting their half-siblings, aunt and dad, we'll begin introductions. Our aim is to bring all nine lions together."

Shera's cubs will not be on exhibit until early summer, which will give the Zoo's animal keepers and veterinary team time to examine them. Nababiep and her cubs will also remain indoors until late spring but can be viewed via the Lion Cub Cam on the Zoo's website. National Zoo visitors can see another set of cubs—7-month-old Sumatran tigers Bandar and Sukacita—on exhibit every day weather permitting.