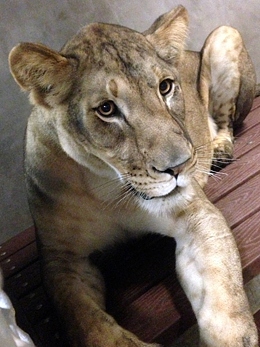 Last week, we bid a bittersweet farewell to Zuri and Fahari, as they left for their new home at the Santa Barbara Zoo. Their new keepers traveled to DC to meet the girls and accompanied them during their flight back to sunny California—via FedEx!

Zuri and Fahari traveled in the same crates that Aslan and Baruti rode in when they moved to the Calgary Zoo. Each crate has a built-in water bowl, catch-pan for urine to drain into, and plenty of ventilation. As you can see in the picture, the crates attach to the same lion chute that leads the cats outside each day. Once the crates arrived back to National Zoo a week before they left, we promptly started giving the girls a chance to check them out. Zuri and Fahari were very curious about the crates and we easily implemented multiple daily crate-training sessions. Zuri seemed to find it entertaining to duck down in the crates and scare the pants of her keepers as we passed by, rushing from the back of one crate to the front of the other while vocalizing. That's lion humor for you! As for crate training, our organized plan was this: Fahari walks through the first crate and into the second crate, and then Zuri enters the first crate only. The reality was that both girls built a positive association with the crates and so both went bounding in when they received access. In any case, they were separated for their travel and were reunited at Santa Barbara Zoo. They arrived safely!

As is standard, the girls will be quarantined for 30 days. Afterward, they will emerge into a world where the daily average temperature is 64 degrees year-around and they will have a tranquil view of the beachfront! The Santa Barbara Zoo is already home to an adult male lion. The three will eventually build a pride of their own.