The National Zoo has welcomed a new addition to Asia Trail. Lek, a one-year-old male fishing cat from the Cincinnati Zoo, arrived in December 2010 and is now in his exhibit. Lek is set to breed with six-year-old Electra, the Zoo's only female fishing cat, who for now is in the enclosure next to him. The Zoo aims to breed these fishing cats as part of the Association of Zoos and Aquariums' Species Survival Plan (SSP), which matches animals across the country to ensure genetic diversity in the population. Of the 38 fishing cats in the United States, the SSP considers only 30 of them to be reproductively viable.

"Fishing cats are terribly difficult to breed in captivity, and unfortunately we didn't have success with Electra and the male we recently moved off exhibit," said Erika Bauer, a Zoo biologist and head of the Zoo's Animal Behavior Group. "It's exciting to have a new breeding recommendation for Electra and Lek, especially because their genetic combination will be a very valuable addition to the SSP population."

Lek will be part of a multi-institutional study looking at the effects of breeding introduction and strategies for moving cats among institutions on the reproductive success of fishing cats. Researcher Jilian Fazio is examining reproductive and stress-related hormones of the fishing cat to determine the effects that different management techniques used in transferring a fishing cat from one place to another may have on these cats. She is also looking at how introduction techniques used to pair two fishing cats, along with their individual personalities, affect reproductive success between those individuals. This information could help zoos across the country implement more effective management tools. Twenty-two fishing cats from 13 zoos are currently part of the study, including the Zoo's three fishing cats (one is off exhibit).

A drastic decrease in the fishing cat population in the wild in the past five years prompted the International Union for Conservation of Nature to change the species' status from vulnerable to endangered. The species' biggest threats include water pollution, deforestation, and poaching. They are native to riverbanks from India through Southeast Asia.

"Fishing cats are a species that we don't know a lot about yet," said Courtney Janney, an animal keeper at the Zoo. "Unlike other cat species, fishing cats aren't known for being climbers or jumpers; instead they go in to the water on a regular basis. They have unique adaptations that allow them to live in the underbrush of riverbanks. They're really a unique species."

As their name suggests, the cats hunt by fishing. They will swim and dive for their prey or try to scoop them out of the water with their partially webbed paws. By tapping their paws on the surface of the water, they trick fish into thinking the water ripples are from an insect. When the fish is close enough, the cat dives in after it. In addition to fish, their diet includes birds, small mammals, snakes, and snails. Watch a video! 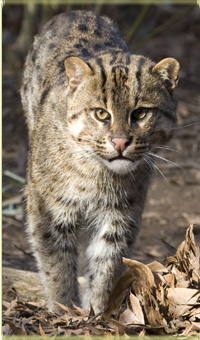