New at the Zoo: Meet a Meller’s Chameleon

What animal has the ability to see in two directions at once, changes colors depending on its mood and can catch its prey with a flick of the tongue? Reptile Discovery Center keepers welcomed a brand new species, the Meller’s chameleon, into their care in June. What’s makes this species so unique? Assistant curator Matt Evans shares some of his favorite fun facts about these charismatic creatures.

What’s in a name?

“The common name of the Meller’s chameleon is the ‘giant one-horned chameleon.’ That’s because males and females both sport a horn at the end of their nose. Scientists have not determined what the function of the horn is, if it has any function at all. Many lizards have crests and other adornments that don’t serve an obvious purpose, but there are some theories that these horns can used as a means of defense or used during combat.”—Matt Evans, assistant curator, Reptile Discovery Center 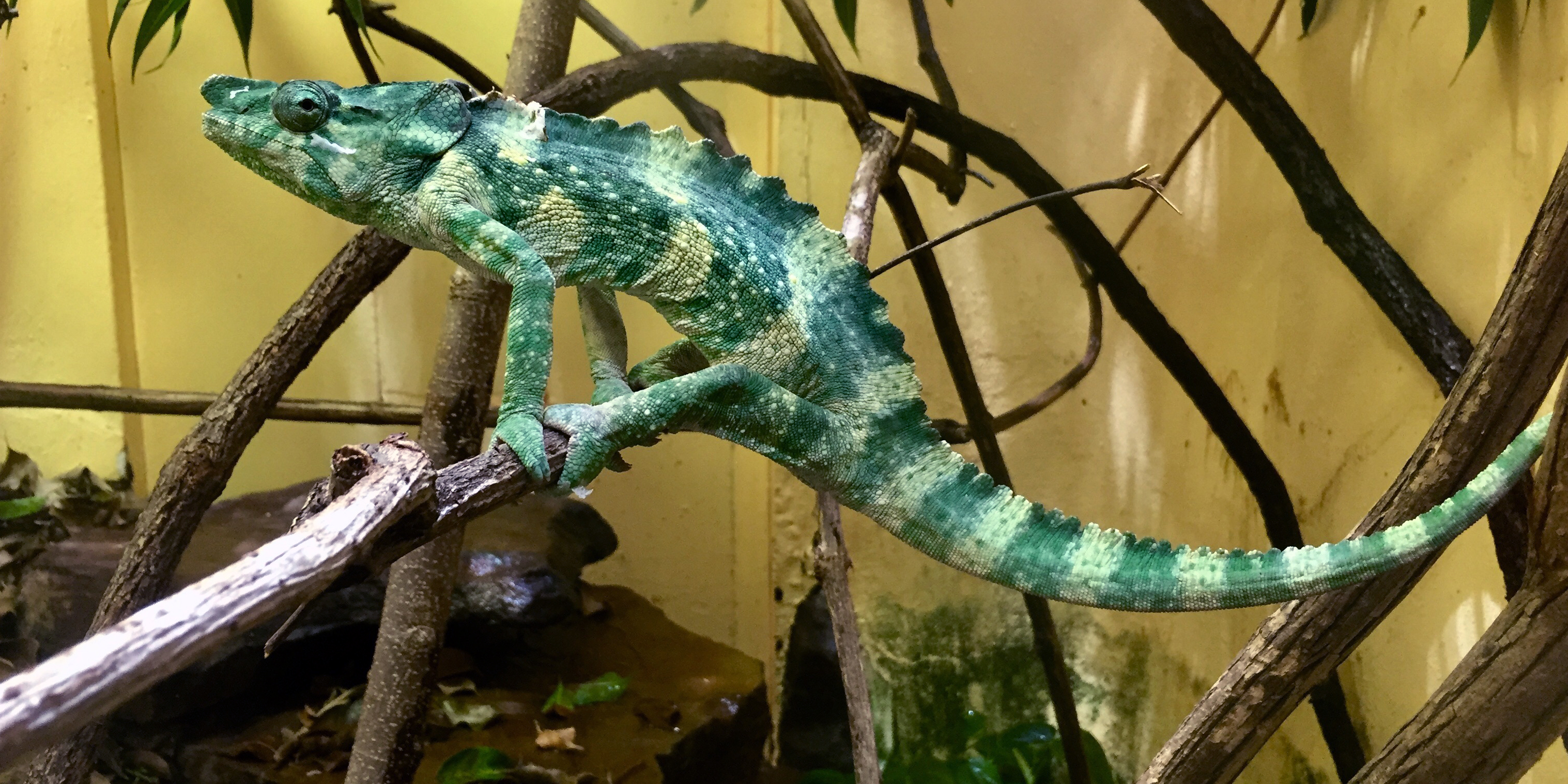 The better to see you with, my dear!

“All chameleon species have the ability to move their eyes independently. One eye could be looking up at the treetop, while the other is looking down at the branches below. That way, if the chameleon spots prey, like a grasshopper or locust, it can use both of its eyes to focus on one area—just like a pair of binoculars. This helps it locate an insect and judge how far away it is. Once prey is within striking distance, the chameleon shoots out its tongue lightening quick! At 20 inches long, the tongue is about the length of the chameleon’s body. It’s a very accurate hunting tool. At the Zoo, we feed the chameleons crickets, roaches and a variety of worms. We give them live prey; it’s easier for them to lock the food in their sights if it is moving and wiggling.”—Matt Evans, assistant curator, Reptile Discovery Center 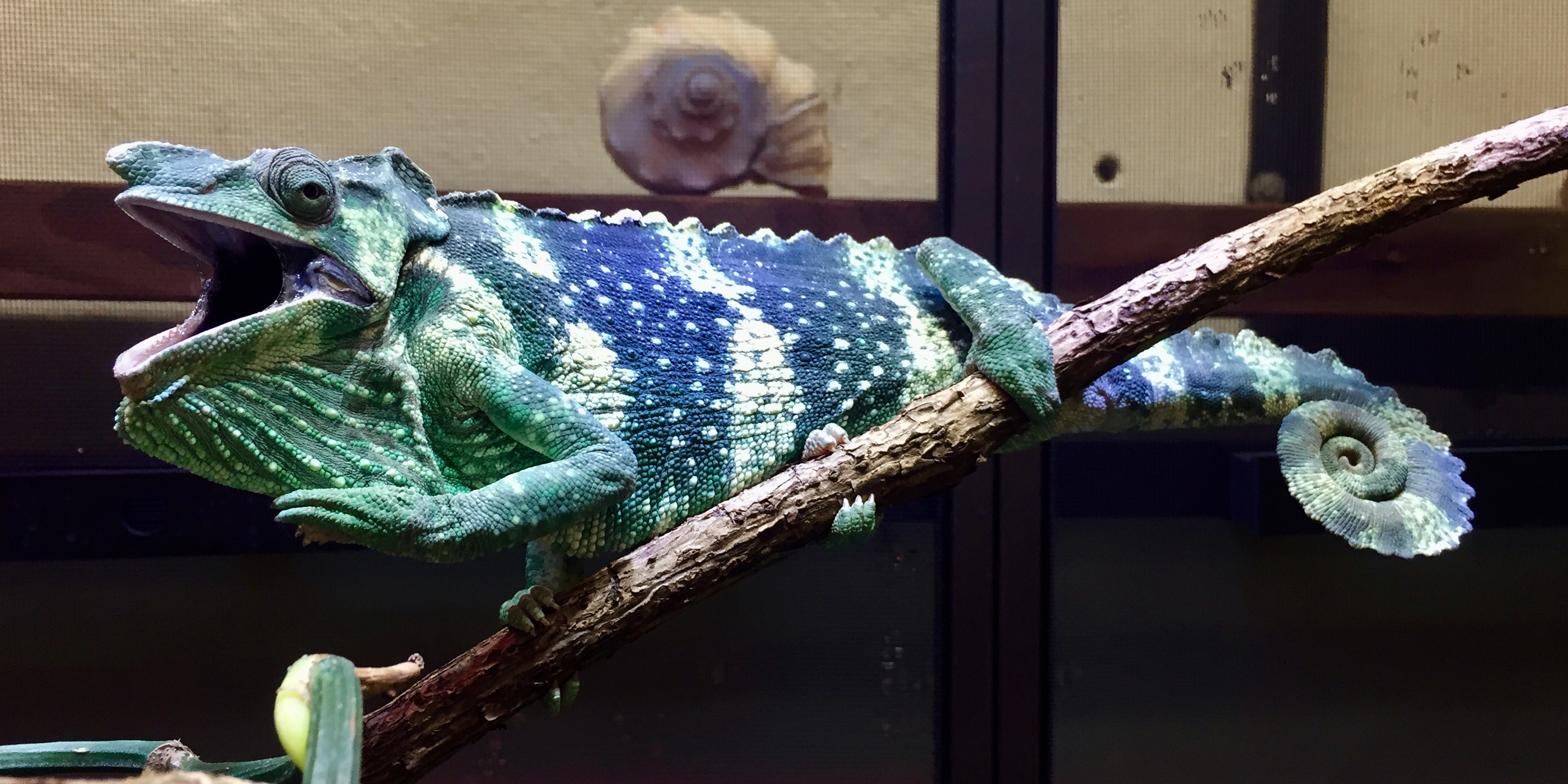 How are you feeling?

“Chameleons are well-known for their ability to change colors. But they don’t do that to camouflage themselves. Instead, they change color based upon their mood. Typically, their skin has a banded yellow and green pattern. If a male is trying to woo a female, however, he might put on a fantastic display of color—vibrant blues, greens and yellows that pop. If the female is receptive, she will respond with bright colors as well. If they are not receptive, or, if they become angry or stressed, their skin will darken and black spots will appear.” – Matt Evans, assistant curator, Reptile Discovery Center

Home on the Savannah

“Meller’s chameleons are the largest chameleons on the mainland of Africa. Adults can grow to be two feet long and weigh over a pound. The International Union for Conservation of Nature considers their populations stable and of least concern. But, that doesn’t mean these animals are in the clear. They have a large range in the wild, and they are somewhat protected and stable living in trees on the savannah. But they face problems when it comes to the pet trade, which has been affecting their populations since the 1980s. To give an example, in one area of Tanzania, more than 50,000 Meller’s chameleons have been removed from their habitats and sold in the pet trade over the past 30-plus years. That’s why keepers always recommend that folks who want reptiles as pets do their research. Never purchase an animal that has been taken out of the wild illegally.” – Matt Evans, assistant curator, Reptile Discovery Center 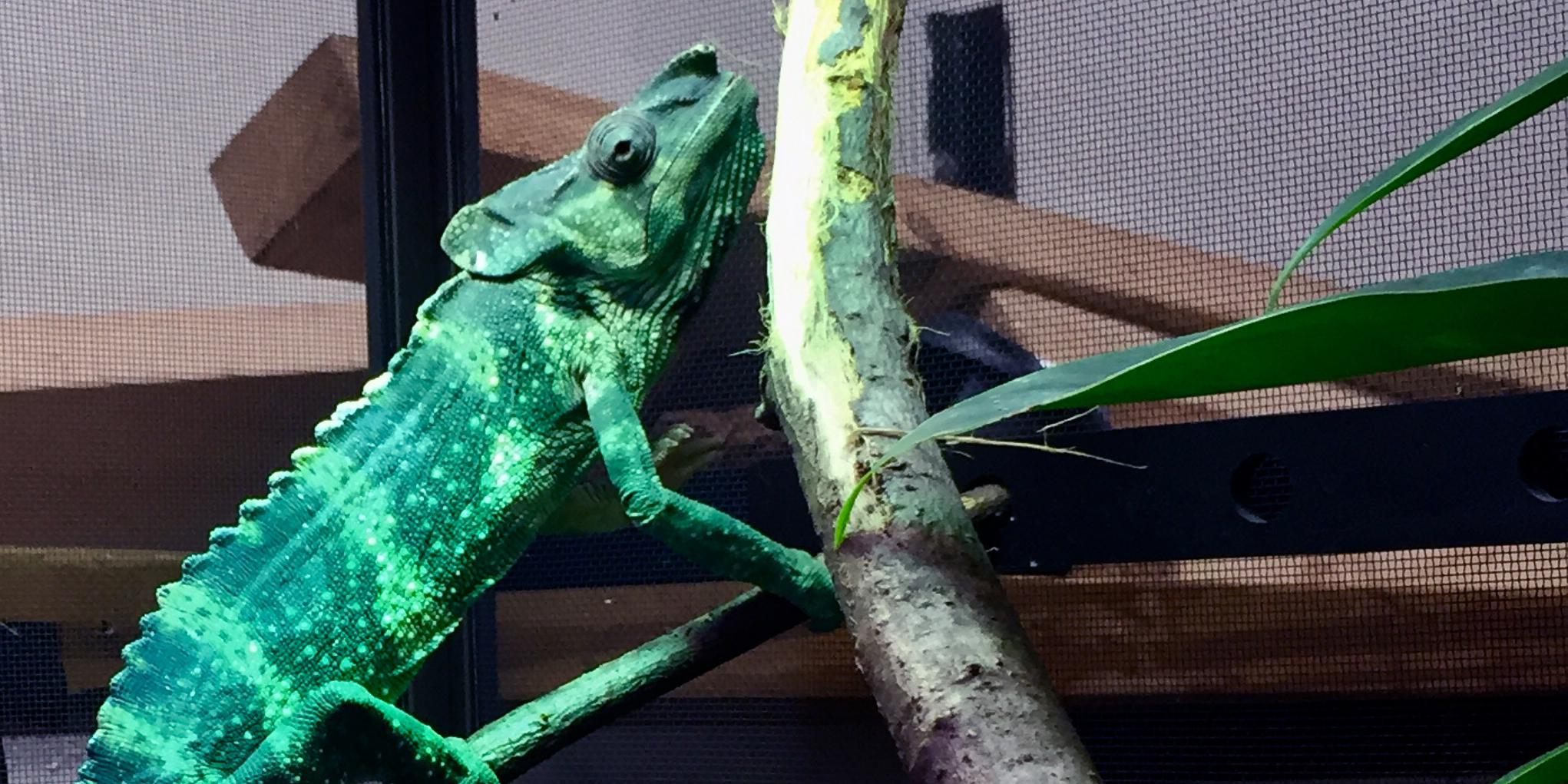 How do you Zoo?

“To care for our chameleons, we offer them multiple kinds of naturalistic enrichment that encourages them to explore their habitats. These animals are specially adapted for life in the tree canopy, so we give them a variety of perching branches, vines and plants. They especially like to climb and be up high. Their bodies are specially adapted for life in the canopy—their feet are divided like oven mitts (two toes on one side and three toes on the other) which grip well and make them great climbers; and they use their prehensile tail as an extra limb for balance when walking through the trees. We offer them a thermal gradient of warm basking spots as well as areas that are cooler and more humid; that way, they can spend time in the area of their choosing. This is especially important since they are still growing and developing. To mimic rain, we turn on a mister in the chameleons’ exhibit for an hour a day, which adds variety to their routine and helps them stay hydrated. Just mixing up the environment is enriching for them.”—Matt Evans, assistant curator, Reptile Discovery Center

This story appears in the September 2017 issue of National Zoo News. Visit the Meller's chameleon in the Reptile Discovery Center!