This update was written by animal keeper Erin Stromberg.

Kyle and Batang—our 17-year-old Bornean orangutans—came to the Smithsonian's National Zoo several years ago. At that time, they were too young to breed; but we hoped that we would receive a breeding recommendation when they came of age. We are excited to announce that we are moving forward with a breeding recommendation from the Association of Zoos and Aquarium's Species Survival Plan.

Animal care staff have been developing a plan that we hope will bring about a healthy baby orangutan! Orangutans typically give birth after a gestation period of 245 days.

Usually, when animal care staff have a recommendation for animals to breed or not, it's a pretty straightforward process. For non-breeding animals, keepers will typically keep them in separate enclosures. For breeding animals, there is an introduction process that starts with visual access while separated by a mesh "howdy door." If these encounters have been positive and both animals are interested in meeting face-to-face, only then will keepers put them together and closely monitor everyone's reactions to make sure all is well.

Our orangutans are in a different situation. Although orangutans are more solitary in the wild than the other great ape species, ours live in flexible groups based on their compatibility. Males Kiko and Kyle and housed separately, but, for the most part, our four females (Batang, Bonnie, Iris and Lucy) have some flexibility on their social grouping. Batang has the most flexibility and can choose to spend time with any of the other orangutans. Social interaction is a type of enrichment that gives our orangutans choice over their environment and keeps them mentally stimulated.

Because our orangutans have the choice to socialize as they please, animal care staff don't have an influence over who copulates with whom. But we can regulate conception. Because great apes are similar in genes, size, and weight to humans, they can use the same contraception humans use (birth control pills), and it's just as effective.

Is Batang on birth control?

Batang has been on birth control since she arrived at the Zoo. Once we received the breeding recommendation, animal care staffed worked together and came up with a breeding plan. As part of that plan, Zoo vets performed a complete physical exam on her to make sure she was fit and healthy before moving forward. I'm happy to say that the vet staff gave us a green light, and we took her off birth control on April 26.

How did you administer the birth control?

Every morning, all of our orangutans receive a Dixie cup of plain yogurt. If the orangutans are prescribed medication by our vets, then it is mixed in with the yogurt.

Have Kyle and Bonnie bred?

Copulations with Batang are few and far between—not only with Kyle, but with Kiko as well. This could be because the birth control suppressed her hormones, and once it's fully out of her system the males may show more interest in her. That's our hope!

Batang and Kyle are the only two orangutans at the zoo that can successfully create a baby during copulations. If they choose to copulate with other orangutans, there is no risk of pregnancy. Kiko, the male orangutan, has had a vasectomy and females Bonnie, Iris and Lucy have had tubal ligations. Because these four orangutans are considered hybrids (a mixture of Bornean and Sumatran orangutan genes) they are no longer recommended by the Species Survival Plan to breed.

How would you encourage them to breed?

Our goal is to keep our husbandry the same. That is, we want to keep the social groupings flexible so they can choose who they want to spend time with. Kyle has always preferred to copulate with Bonnie more so than Batang. A likely option would be to keep Kyle and Bonnie separated from one another. In that scenario, however, we run the risk of Kyle reacting negatively to the separation. We want Kyle and Batang's interactions to be as positive as possible.

That's why the current management plan works best. Neither Kiko nor Kyle has showed interest in Batang yet. We're in a wait-and-see period and monitoring how both males react to Batang as she comes off birth control and her hormones start rising.

How do you prepare an orangutan for parenthood?

Training increases the likelihood that orangutan parents will care for their infants. This training is especially important for a female that would be a first time mother, like Batang. It is our goal to have the infant stay within the orangutan group, learning how to be an orangutan from other orangutans.

Batang has been trained to participate in ultrasounds. This will allow us to monitor the development of the baby in Batang's belly. Another very important training session revolves around teaching Batang how to care for an infant. First-time mothers sometimes have difficulty raising offspring, so we want to expose Batang to the experiences of motherhood prior to the baby's arrival.

To do that, we made Batang a "Fake Baby." Whenever we're training a maternal behavior, we use Fake Baby as an infant substitute. Essentially, it's a plush bean-shaped pillow that has some embroidery where the baby's face would be. The goal is to cue Batang on how to hold Fake Baby, move it around the enclosure, and give the keepers Fake Baby when asked.

We also installed a specially designed small mesh "baby box." As part of her training, Batang must place Fake Baby in the box and be comfortable with the keeper door opening and closing to remove/give back the baby. If keepers needed to evaluate a real orangutan baby, this training would help us retrieve the baby safely.

Who participates in the training?

We want to make the training sessions as similar to a real-life scenario as possible. It's important that we do training both individually and in groups. We're training multiple orangutans and familiarizing them with the motions of presenting the baby, putting it in the box, etc.

I am working mainly with Bonnie and Iris, who are being trained as surrogate moms. If Batang, even with our training, does not want to carry or care for her infant, Bonnie or Iris will be trained in hopes that they will take on the role of surrogate mom. If they will carry the infant, they can be trained to bring the infant to keepers for bottle feedings. This type of surrogacy training has been proven effective in other zoos in the US.

Kyle has also participated in training, but he tends to view Fake Baby as a toy and will tear it up from time to time, possibly to see if there are any good treats hidden inside. This is why we choose an inexpensive Fake Baby, one that we can mass produce during the training process if need be. We're on Fake Baby #3!

What are the challenges of training?

Training the orangutans to put Fake Baby in a box, pick it up, carry it around, etc. is challenging in itself. It's difficult to demonstrate and articulate to them what you need. Keepers can't mirror what we want the orangutans to do. We rely heavily on the trust we've built in previous training sessions as well as voice direction. They're also used to trading objects with keepers through the mesh, which makes the baby box phenomenon a new and different experience. So far, they're really picking up our voice commands and doing a great job.

How long is a training session?

Training sessions usually last about 5 to 10 minutes. The reason why we do not give them full access to Fake Baby is because we do not want it to turn into a toy. Orangutans are very strong, and they can (and have!) ripped out the stitches.

We always want to end on a good note where keepers have the baby back. Usually, we put it in and out of the box a couple of times and go back and forth with the orangutans. But, as long as we get it back in one piece at the end of the training session, it's been a good session.

Are they rewarded for doing the behavior asked of them?

Yes! They get a little bit of juice from a squirt bottle, which is one of their favorite treats.

What's the next step?

The next part of our training will be orienting the baby. The spiral embroidery "face" helps us show them how to orient the baby right-side up, just in case we need them to bring it to the mesh in the event we need to bottle feed it or if we were trying to position the baby to breastfeed from mom.

I want to help orangutans! What can I do?

Visit the Zoo to learn more about orangutans and to see these beautiful creatures up close!

Many products—especially food—are made with palm oil. Humans have cleared land that was originally orangutan territory in order to meet the growing demand for palm oil products, fast-growing pulp wood and food crops leaving orangutans—which are mostly solitary by nature—in competition with one another for space, food and mates. Look for products that are made with sustainable palm oil—they're orangutan friendly!

Other threats to orangutans include the illegal pet trade, use of body parts in traditional medicine, and the bushmeat trade among others. Do not support these illicit trades, and spread the word that orangutans need our help to thrive in Indonesia.

Your help can ensure the future of orangutans not only at the Smithsonian's National Zoo but in the wider, wild world! Text NATZOO to the number 20222 via cell phone to donate $10 to our conservation fund. 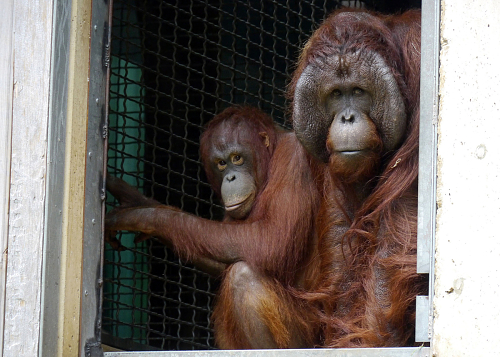