At 16 months old, Bornean orangutan infant Redd is growing stronger and more independent every day. Read all about Redd’s progress and favorite activities in the latest Q&A with animal keeper Erin Stromberg.

How is Redd doing?

Redd is doing very well! Over the past several months, he has sharpened his coordination and climbing skills. He is becoming more independent from mom, Batang.

Like all toddlers, Redd explores the world with his mouth. He still participates in the orangutan tooth study, but seeing his teeth can be quite difficult unless we catch him yawning. His first set of incisors and pre-molars are easy to spot, and his canine teeth have erupted and are coming in nicely. 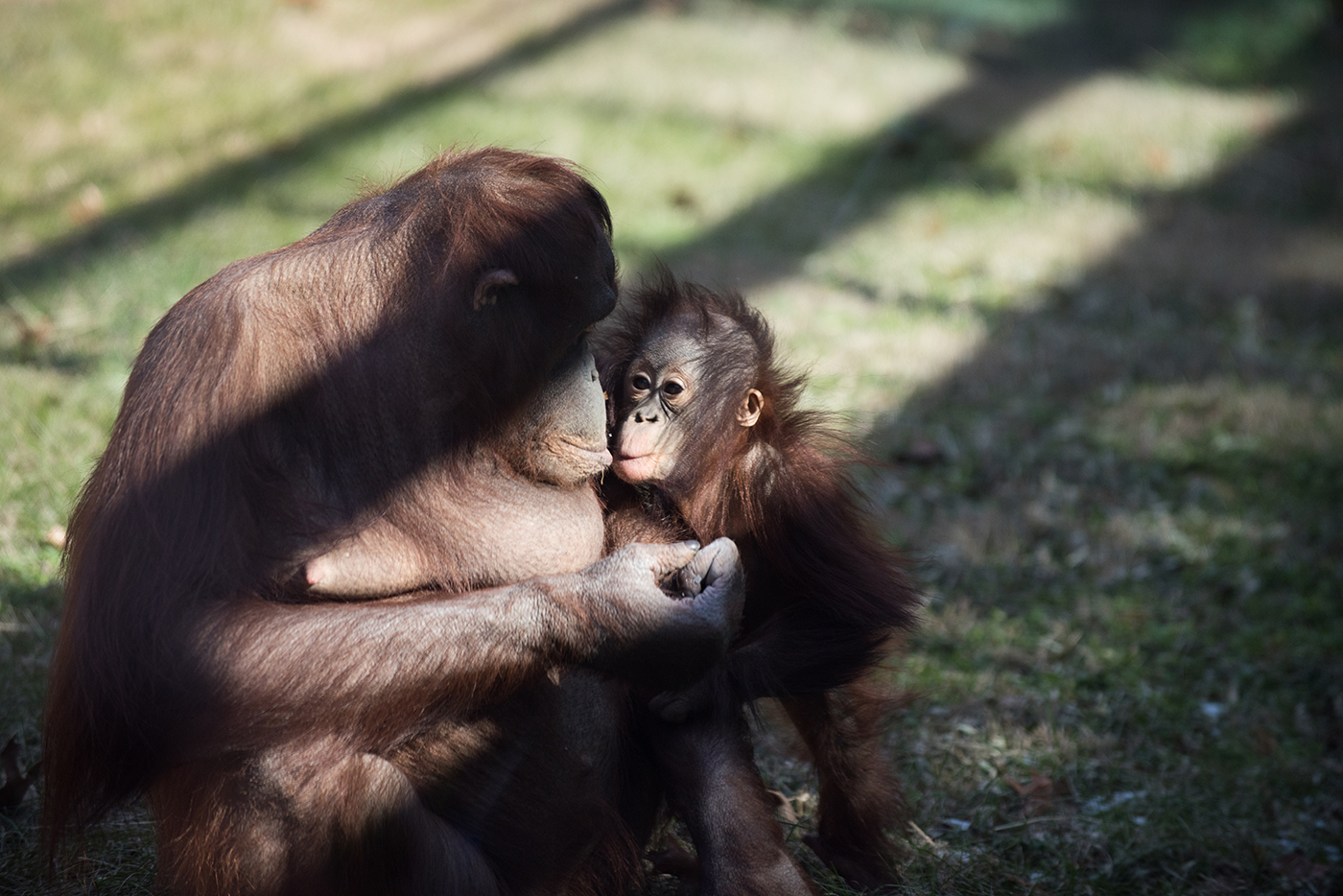 What do Redd and Batang do in the winter?

Orangutans’ native habitat—Borneo and Sumatra—is a tropical climate year-round. In Washington, D.C., however, winter temperatures fluctuate from mild to below freezing. Orangutans are covered with dense, coarse hair, but it is not as warm as a winter coat.  Our animal care protocol stipulates that adult orangutans stay inside when the outside temperature dips below 40 degrees Fahrenheit. For youngsters like Redd, the cutoff temperature is even higher—50 degrees Fahrenheit. Even when the temperature is cooler outside, the orangutans always have the choice of venturing outside for a short amount of time, or they can choose to not go outside at all.

Lately, Batang and Redd have been spending some quality time together at Think Tank, just the two of them. When the other orangutans are not in the same building, Batang allows Redd to be much more independent, and he has many more opportunities to interact with enrichment and toys. When Batang and Redd are spending time with our other orangutans, Redd has to be very quick if he wants to compete with the others for enrichment.

Batang has two favorite toys. One is a small boomer ball with holes in it, which we fill with popcorn. The apes have to shake, twist and turn the toy to get the treats. Her other favorite toy is a cube made from interlocked fire hose. Similar to the popcorn balls, Batang has to manipulate the cube in order for the treats to fall out.  She is very dedicated to taking the time to make sure she gets every treat. 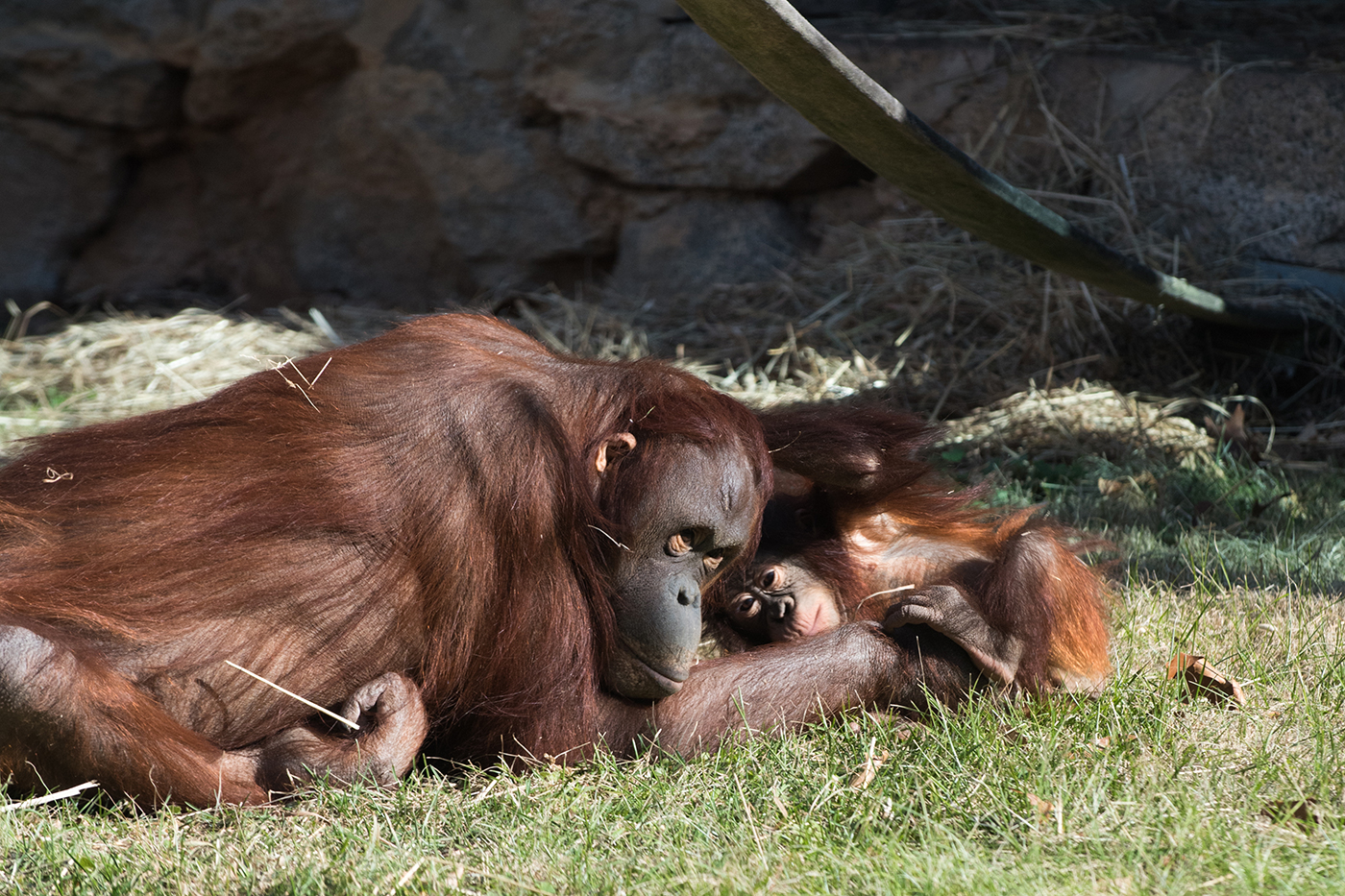 Does Redd have a favorite toy?

Redd learns quite a lot just by watching Batang play, but one toy they both seem to enjoy are large rubber tubs filled with pine shavings. We provide them with sand castle molds, shovels and other small toys that encourage the orangutans to interact with the shavings and with one another.

What are Redd’s favorite foods?

Our Department of Nutrition Sciences created a diet bin specifically for Redd. He receives the same fruits and vegetables that the adults receive, just smaller portions. We feed Batang and Redd simultaneously so that she does not take food from him (she is not a fan of sharing). Bananas, grapes and popcorn top Redd’s list of favorite foods. That said, he has a great appetite, and we have yet to find a food that he is not willing to try.

In addition to eating solid foods, Redd continues to nurse multiple times a day. He is large enough that Batang no longer needs to cradle him. Instead, he will stand in front of her to nurse. 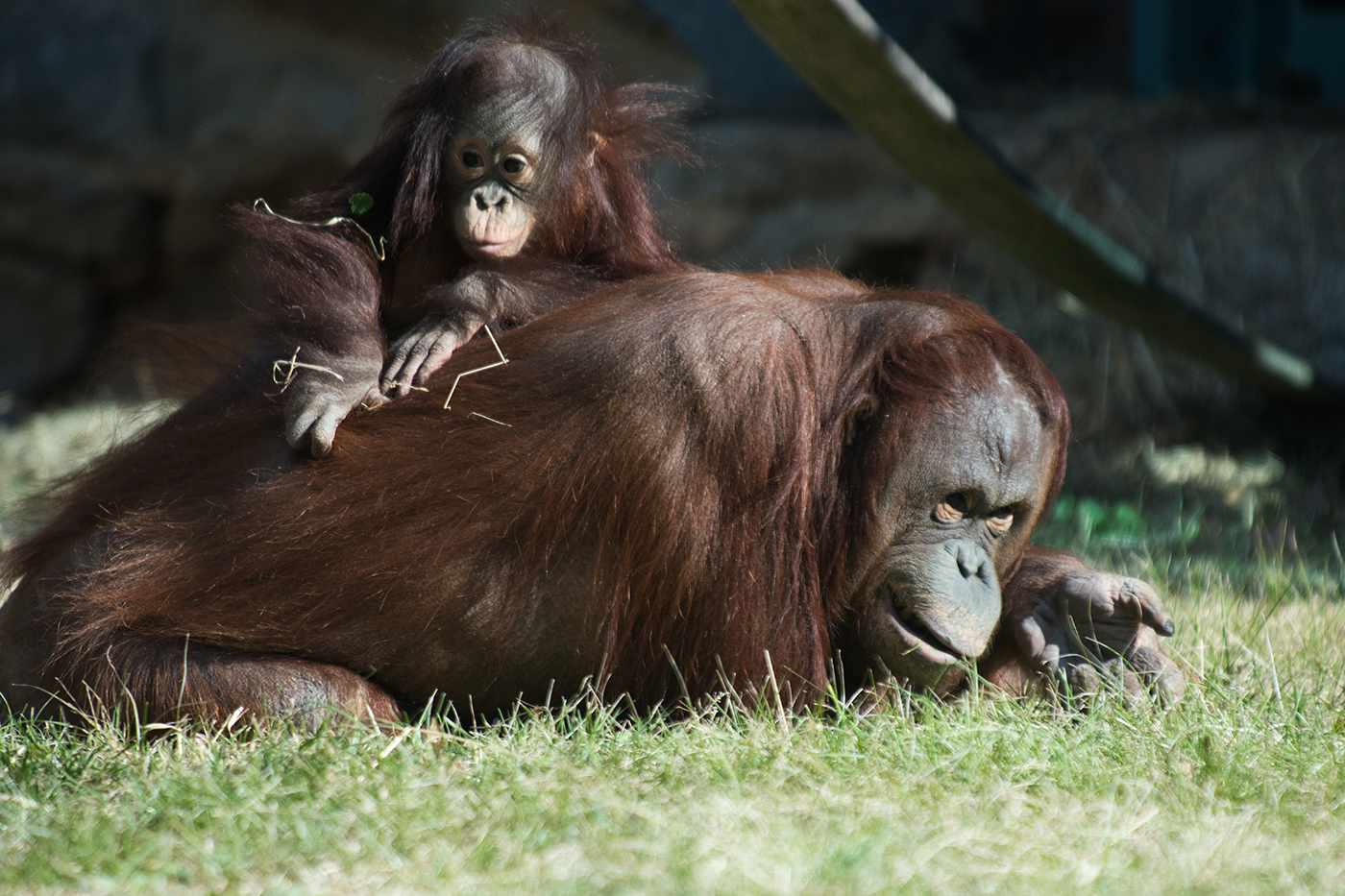 Is Redd training with keepers?

We have started training Redd to do a very basic behavior called stationing, in which we ask him to move from one area in the enclosure to another. When he does this behavior, we reward him with one of his favorite foods. Each orangutan has his or her own colorful disk that they follow during these training sessions; Redd’s disk is yellow. Ultimately, we want Redd to make the connection between us asking for a behavior, him voluntarily doing that behavior and us rewarding him for his participation. This technique of positive reinforcement helps establish trust between Redd and our keeper team. Stationing Redd a bit away from Batang also allows each orangutan to receive some individual attention. It is a great time to give Batang a training session without Redd distracting her or getting in the way!

We began with this simple stationing behavior because he has the attention span of a toddler. When he is a bit older, he will be able to focus and lean more complex husbandry behaviors, such as opening his mouth, showing us his hands and feet, and so on.

When Batang participates in training, Redd is usually very interested in whatever she is doing. This is especially true of the touchscreen computers in Think Tank. We use these screens for research that helps us better understand the way in which these great apes think. During the research session, keepers reward the apes with grapes for their participation. Redd is usually close by Batang as she works on the touch screen. Occasionally, he will reach out and touch the screen. Batang takes her research very seriously, so she often gives Redd a slight shove to move him away from the computer. Our animal care team does our best to keep him occupied while she is working at the computer so that he does not inadvertently change her answers! 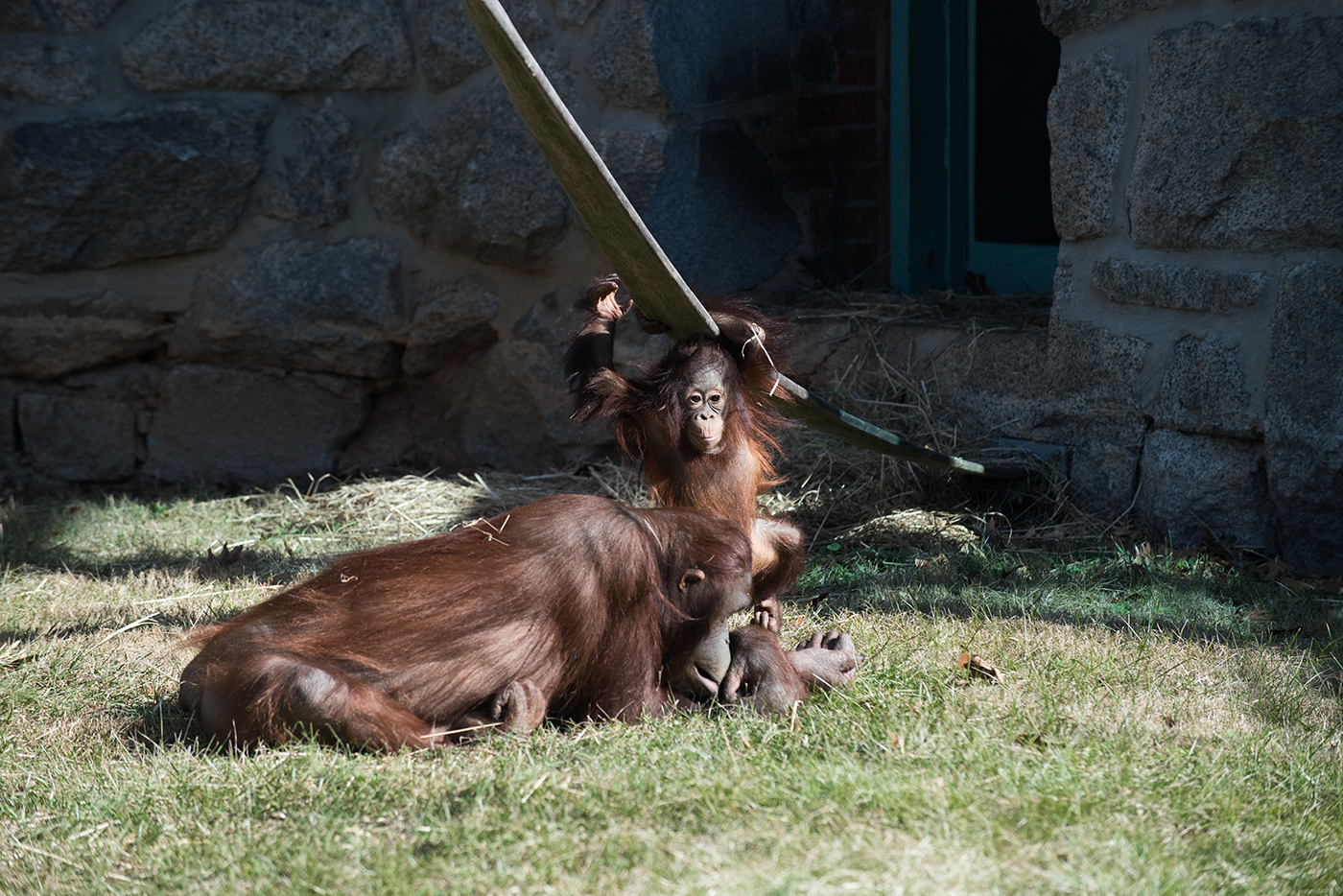 How does Redd get along with the adult orangutans?

All of the orangutans have met Redd and seem to enjoy interacting and playing with him. Batang’s mood varies day to day. Some days, she keeps Redd close by her side. On others, however, she will let the other orangutans babysit. Batang is always close by, but more and more we are seeing that Redd is independent of her and wrestling around with one of the other females. On those days, it is not unusual to spot orangutans of all ages tumbling around the habitat, climbing in and out of tubs, playing inside cardboard boxes or resting with Redd on top of them.

Our female orangutans—Batang, Lucy, Bonnie and Iris—tend to be more playful with him than our males—Kiko and Kyle. However, we anticipate that they will be more interested in playing with Redd as be becomes older and more independent from mom. Orangutans are semi-solitary in the wild, so we continue to keep a close eye on the social dynamics of our groups to ensure their encounters are positive.

Back in November, Redd met Lucy for the first time. Lucy is the most dominant female of our orangutans, but she and Batang get along quite well. We arranged for them to meet outside; that way, Batang and Redd could go to Think Tank if Batang was not comfortable around Lucy. Luckily, Redd and Lucy became fast friends. At first sight, Redd jumped off Batang, ran over to Lucy and began climbing all over her. She seemed to be smitten with him! 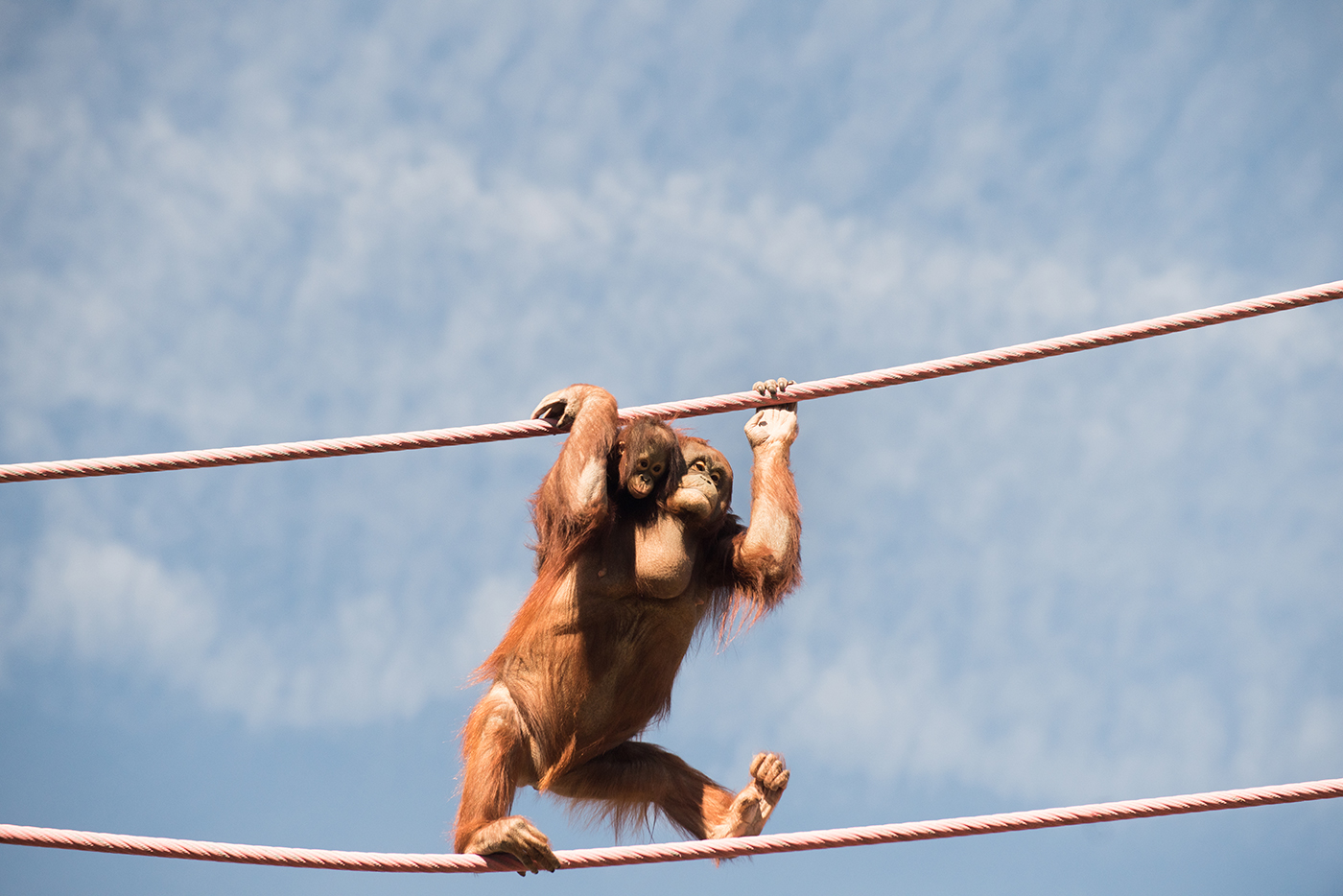 What is the next big milestone for Redd?

Now that Redd is becoming more independent at climbing indoors, we expect that he will begin to climb and explore the outdoor enclosures more often as well. He still clings to Batang when they cross the O-Line, but he also shows interest in reaching up toward the cables. Down the road, Redd will be independent and brave enough to cross by himself, if he wanted to. For now, though, he seems content to hitchhike on mom.

This story was featured in the February 2018 issue of National Zoo News. Give a toy to your favorite animal by donating to the Zoo Toy Box! Keepers replenish toys on a regular basis to keep habitats novel and stimulating. Click here to support the Animal Enrichment Program.