Seven months ago today, three male red pandas—Clinger, Slash, and Shredder—were born to mother Shama and father Rusty at the Smithsonian Conservation Biology Institute. When Shama died a short time later from encephalitis, keepers stepped in and hand-raised her young. At the time, the cubs were just shy of two months old. Now, thanks to the efforts of animal care staff, they are growing and gaining independence! Meanwhile, dad Rusty is "doing great" according to keepers Jessica Kordell and Ken Lang. He'll stay a bachelor this year, since he did not receive a breeding recommendation from the Association of Zoos and Aquariums' Species Survival Plan.

Want red pandas to return to the National Zoo? Join fellow red panda fans and make a gift towards the Red Panda Retreat. The much-needed temperature-controlled facility will be complete with branches for climbing and multi-level platforms for playing and sleeping. On behalf of the animals we care for: thank you!

How do you tell the brothers apart?

Shredder is a bit smaller than his older brothers at 6 pounds, and his face is not as round. As he grows, he's looking more like them every day! Clinger and Slash look so similar that we've shaved a patch of fur in a different spot on each cub to help us tell them apart. Slash is about 7 pounds and Clinger is the largest at 7.5 pounds.

Do the cubs have their own distinct personalities?

Shredder, being the smallest cub, tends to be very protective of his food! Either he'll scarf it down in seconds, or—if he's treated with banana—he'll stick it to the roof of his mouth and keep it there for a time. Clinger, on the other hand, tends to take charge, especially at feeding times. Slash is a bit more laid back and tends to follow his brothers around.

How did they adjust to bring hand-raised?

When the cubs were still with Shama, Shredder was out-competed for milk by his brothers. To compensate, we supplemented his feedings daily with formula. Initially, the cubs didn't want to be held or bottle-fed, so all three brothers drank from a bowl. It was a messy process at first. Then, they got a taste for formula, and mealtime became a smoother experience for cubs and keepers alike.

What's next for the cubs?

Recently, the cubs moved to a larger enclosure where the space is taller and wider and they have more room to climb and play. They're also learning day-to-day husbandry behaviors, such as transferring from one enclosure to another using the chute system. We're also in the process of training behaviors such as climbing onto a scale on cue.

Later this spring, all three boys will be transferred to Elmwood Park Zoo. They'll stay together in a bachelor group for about another year before they're paired with mates. 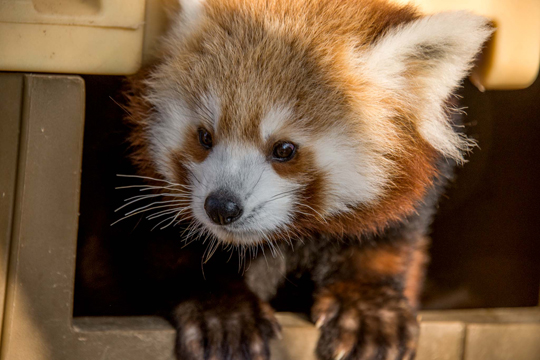