The Secret to Saving a Species

Shell-ebration is in order for the Reptile Discovery Center, where two critically endangered Bourret’s box turtles hatched for the first time in the Smithsonian’s National Zoo’s history. This conservation success was more than a decade in the making for animal keeper Lauren Augustine, who manages the Association of Zoos and Aquariums’ Species Survival Plan studbook for this shy, charismatic species.

You’ve been trying to breed this species for a few years. What was the secret to this year’s success?

I’ve been studying and collecting data on this species for 10 years, so when these guys hatched I was so excited I started crying! In previous years, we had infertile eggs and full-term embryos that died in the eggs. It’s not uncommon for that to happen; but it made me all the more ecstatic this year when we had healthy hatchlings.

A look at the natural history of this species revealed that the adults needed to be brumated (temperature cycled) in winter. Bourret’s box turtles live in the mountains of central Vietnam, where the weather is temperate. It gets quite chilly from October to March. We didn’t know the exact temperature at which they needed to be brumated, nor the length of time, so we made an educated guess. Brumation is necessary for the production of viable sperm and ova, so it’s an important factor to get right!

Last winter, we brumated the adults down to 45 degrees Fahrenheit, a cooler temperature than in previous years. This seemed to do the trick. The female laid her first two eggs March 22, and they hatched June 12 after 82 days of incubating. We are keeping our fingers crossed that a second clutch, laid April 29, will hatch with similar success in July.

How do you care for a newly hatched turtle?

From the moment they hatch, these turtles are independent and ready to hunt. In the wild, mom doesn’t provide any care for the babies. After digging a small divot in the dirt for her nest, she lays her eggs and partially buries them in the dirt. Sometimes, she will pull leaves over the nest to camouflage it. Once she leaves the nest, the eggs (and hatchlings) are on their own.

For the first week, a hatchling is sustained on the yoke of its egg. Following that, siblings go their separate ways. We mimic that natural separation by keeping them in separate enclosures. Although adult Bourret’s box turtles tend to be terrestrial, the hatchlings are aquatic. We provide our hatchlings with enclosures that give them an opportunity to wade in the water and feed on black worms, earthworms and crickets. Keeping them separated also helps us measure how much food they are eating. So far, both look great and are eating well. 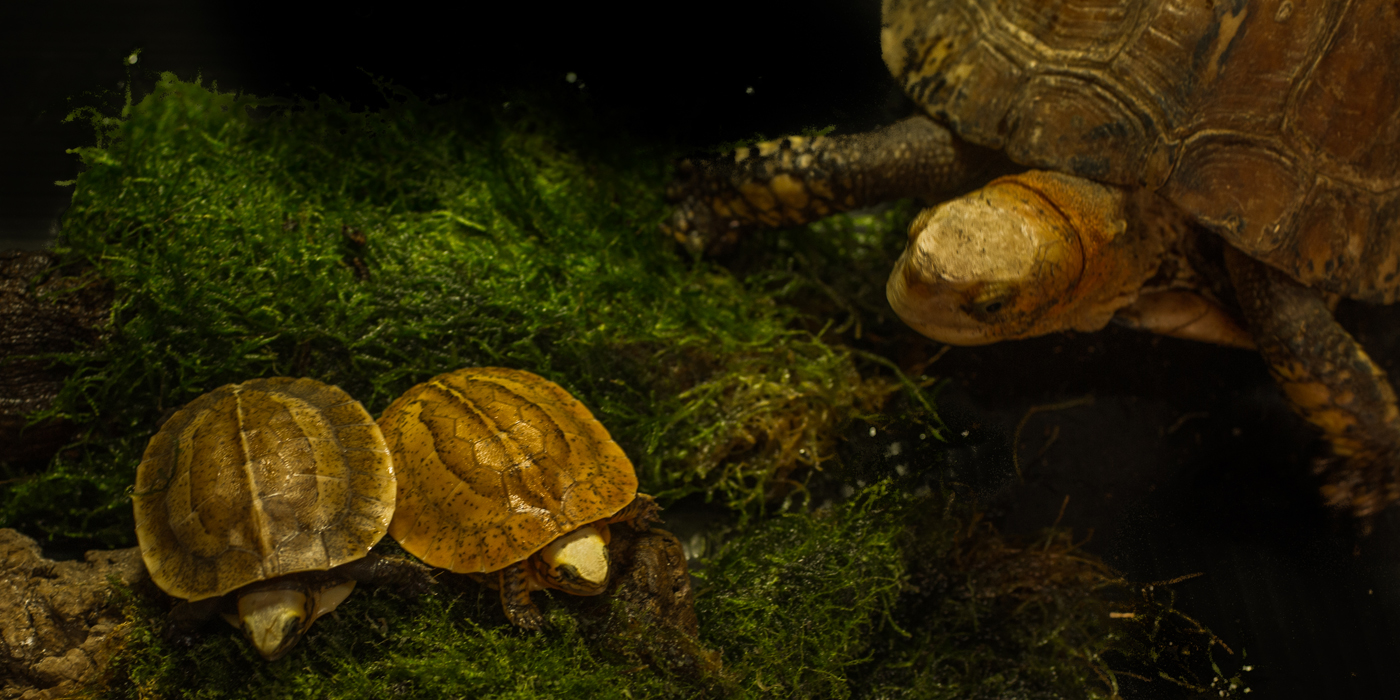 Is it challenging to care for a semi-aquatic species?

It can and has been challenging to successfully breed this species in human care. Part of the reason behind our recent success is an increase in the diffusion of information between zoos, rescue institutions and private breeders. As the studbook keeper for the species, I am responsible for tracking and pairing males and females based on their best genetically diverse match. Every year, I send out a survey to collect information on brumation, egg incubation and diet and compile the findings—what is working, and what is not working.

Together, we figured out why hatchlings had such a low survival rate in the last 10 years. Because the adults are a terrestrial species, conservationists may have missed that the hatchlings thrive and feed in an aquatic environment. This species is also quite shy; if they don’t have ample places to hide in an exhibit, they may not want to eat. This demeanor makes them a bit challenging to raise in human care.

Right now, our priority is to make sure the hatchlings are healthy and eating. They’re such an awesome species, our goal is to slowly acclimate them to people and hopefully exhibit them in the future. 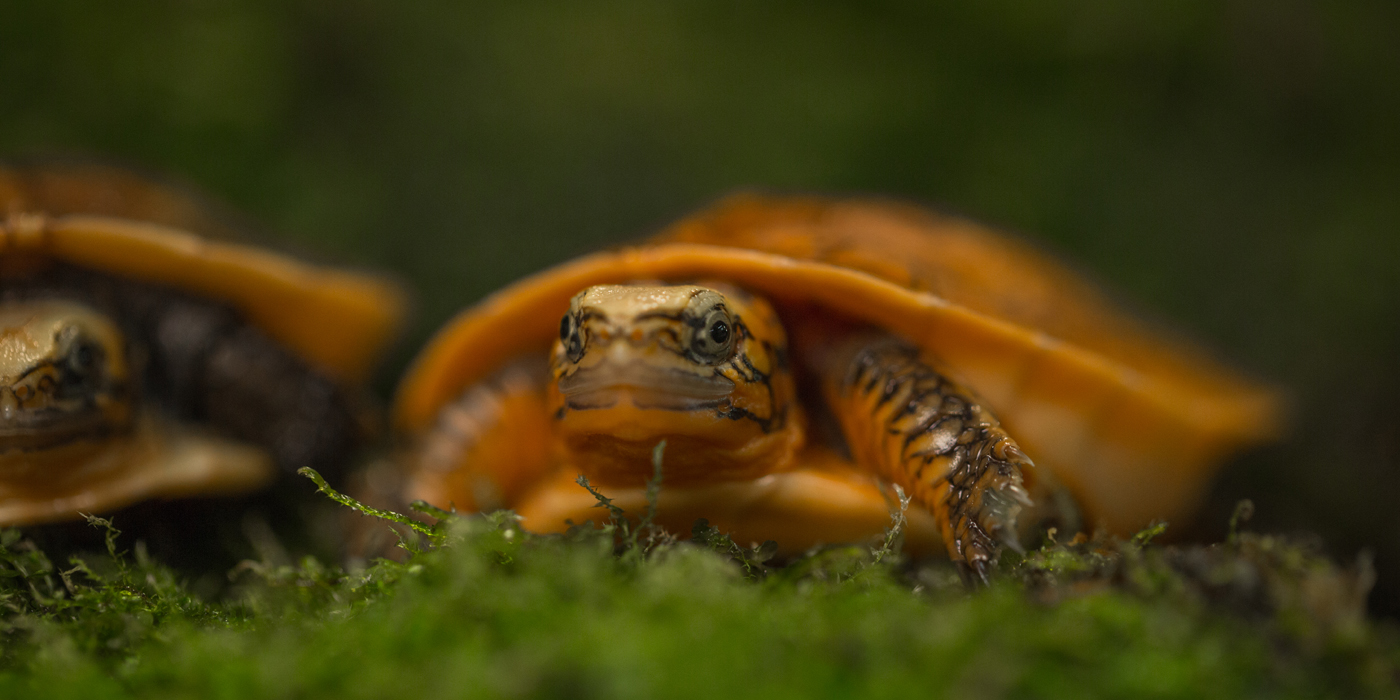 What threats do the turtles face in their native habitat?

Illegal poaching for food, traditional medicine and pet trades is the biggest threat these turtles face. While there is some protected area in Vietnam and enforcement has increased, the species has not been able to bounce back. That’s partly due to their reproduction; females lay only one to three eggs in a clutch. We estimate that box turtles can live into their 60s, so when a sexually mature turtle is removed from her habitat, we miss out on many generations of turtles. 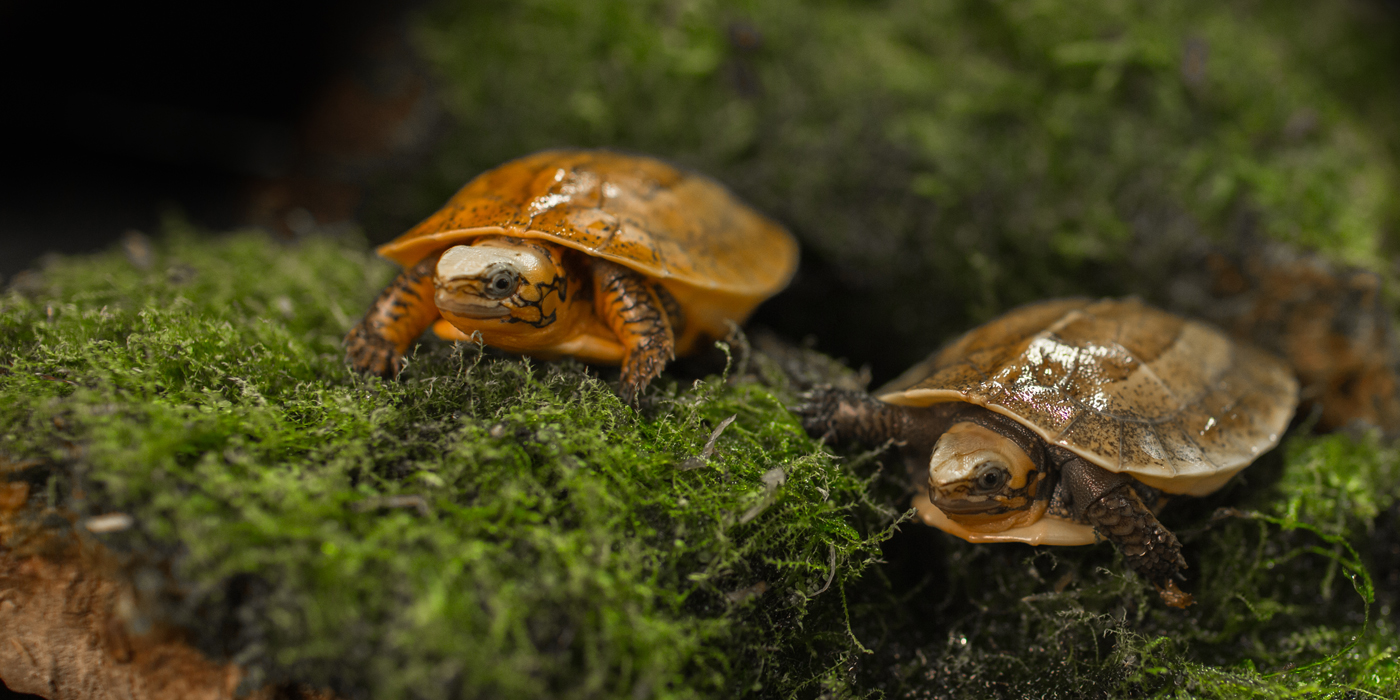 How are conservation organizations helping to save this species from extinction?

Because Bourret’s box turtles in the wild continue to face threats from poaching, the Association of Zoos and Aquariums’ (AZA) Species Survival Plan’s priority is to maintain a global assurance population in human care.

There are many different venues working with these species, including the Turtle Survival Alliance in South Carolina and the Asian Turtle Program in Vietnam. The Turtle Survival Alliance is a sustainable partner with AZA and, like the Smithsonian’s National Zoo, is working to breed this and other critically endangered turtles. The Asian Turtle Program is also trying to breed turtles, but their main focus is rescuing, rehabilitating and reintroducing turtles that have been confiscated from poachers.

As long as our adults are producing eggs and hatchlings successfully, we will continue to breed them here. These hatchlings are a big success that the Reptile Discovery Center team has been working toward for a long time. The whole department is really excited and proud of this moment.

This story appears in the July 2017 issue of National Zoo News.