The decision for keepers at the Smithsonian's National Zoo to hand-raise a female sloth bear cub instead of leaving her with her mother Khali likely saved her life. She is now very active and growing as the result of the round-the-clock care she has received for the past two-and-a-half months.

The cub was one of three cubs born to Khali December 29, 2013, and she is the only cub that survived longer than seven days. Khali ingested the first cub about 20 minutes after she gave birth December 29. It is not uncommon for carnivores, including sloth bears, to ingest stillborn cubs, or even live cubs if they or the mother are compromised in some way. Khali, an experienced mom, appeared attentive to her two remaining cubs, and keepers monitored her closely via closed-circuit cams before, during and after the births. However, she ingested a second cub seven days later and spent several hours away from her remaining cub in the early morning hours of January 6, which is not normal for a sloth bear with a newborn cub.

"Our team is always prepared to intervene and hand-rear a cub if it appears that a cub is not thriving," said Tony Barthel, curator of Asia Trail. "We already had developed a plan for hand-rearing before Khali gave birth, and our ability to act quickly was critical."

At that point, keepers decided the only way the remaining cub would likely survive was to retrieve her from Khali's den. Keepers rushed the cub to the veterinary hospital around 7:30 a.m. Veterinarians examined her and determined that she was hypothermic and weak. Khali had not been cradling her, which would have regulated the cub's temperature and kept her warm. Veterinarians treated her with antibiotics, vitamins and fluid therapy. They also placed her in an incubator to help stabilize her body temperature. By 9 a.m. she was nursing from a bottle. For the next several days she was bottle-fed eight times each day. The cub was healthy enough to leave the veterinary hospital January 9 and was returned to the sloth bear habitat, but keepers could not return her to her mother.

Keepers searched for other sloth bear cubs, or different bear species cubs, currently being hand-raised at other Association of Zoos and Aquariums accredited institutions, but were unable to find any. Instead, a team of National Zoo keepers, veterinarians and nutritionists immediately stepped up as surrogates for the cub.

"Carrying the cub around for hours at a time gave us a unique opportunity to bond with her," said Stacey Tabellario, animal keeper. "We quickly became in-tune with her vocalizations, movements and sleep patterns. With past cubs at this stage, we mostly only viewed them via closed-circuit television, so this has been a great chance to learn more about cub development."

Keepers stay with the cub 24 hours a day and bottle feed her at regular intervals. After the cub first returned to the sloth bear habitat, keepers bottle-fed her seven times each day, but that was gradually reduced to six and now five times each day.

When the cub's eyes opened onJanuary 26, keepers started to increase their level of interaction with her to provide her with the social stimulation she needed. Sloth bear cubs stay with their mothers for about three years. As newborns they are cradled by their mothers, and as they grow they ride on their mothers' backs. To simulate those types of interactions, the keepers initially carried the cub in a baby sling with them during their daily routines. Now that she is a little bigger, keepers play with the cub in her den or in a specially designated play area to encourage natural behaviors like climbing.

"It is always preferable for cubs to be raised by their mothers, but that was not possible this time," said keeper and sloth bear expert Mindy Babitz. "We had to become this cub's 'mothers.' We are caring for her needs around the clock—not just physical, but social, cognitive and emotional needs; it's very encouraging to watch her develop and grow."

The sloth bear team would like her to interact with other sloth bears. In the coming weeks keepers will allow the cub to explore the indoor dens of the Zoo's adult sloth bears while they are outside. They plan to visually introduce her to the adults over the next few months. If the gradual introductions go well, the cub may eventually be reintroduced to Khali, or introduced to her father Fran?ois for companionship. The cub will likely not be on exhibit until summer.

Khali has successfully raised two cubs, born in 2004, before. She gave birth to another cub in 2002, but the cub only survived for about one month. Fran?ois, the Zoo's adult male sloth bear, sired the cubs born December 29, 2013. Khali is only the second sloth bear to give birth to a litter of three cubs in North America. 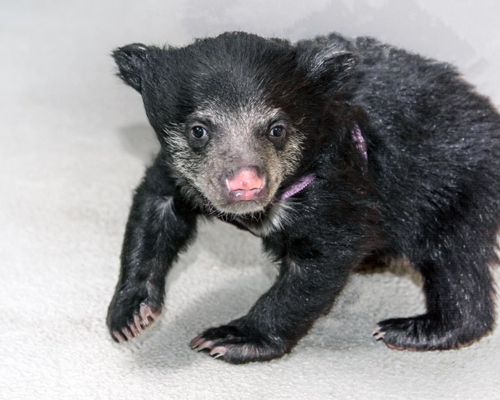