With the help of the Smithsonian's National Zoo, the Socorro dove has returned home to Mexico! This spring Africam Safari, a zoo located southeast of Mexico City, celebrated the arrival of several Socorro doves, including two hatched here at the National Zoo.

This critically endangered species is native to Socorro Island, off the west coast of Mexico. Since invasive species such as feral cats drove Socorro doves to extinction in the wild in the 1970s and 1980s, they have only existed in captivity. Now, scientists are moving the Socorro dove back to its native country, with plans to eventually reintroduce the species into the wild.

The National Zoo is only the second zoo in North America to breed Socorro doves. Kathy Brader, a keeper at the National Zoo's Bird House, was excited at the opportunity to participate in bringing Socorro doves back to Mexico. "I couldn't wait to get them!" Brader said. "These doves have such lovely personalities and very easygoing with other birds and people. They are very curious, and will even land on a keeper occasionally while you are working, just to take a close look at what you are doing. Chicks always gives us a special feeling but helping a species that no longer is in the wild makes it extra special for us. 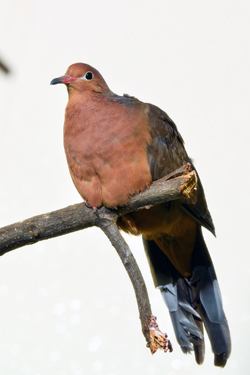