A female clouded leopard at the Smithsonian Conservation Biology Institute (SCBI) in Front Royal, Virginia, gave birth to a litter of two cubs Monday, March 28. Staff had been on a pregnancy watch of the two-year-old Sita for one day. Sita gave birth to the first cub at 1:15 p.m. and the second cub at 1:25 p.m. The male cub weighed 9.48 ounces and the female cub weighed 7.76 ounces. This is the first litter for Sita, who came from the Nashville Zoo, and the father, two-year-old Ta Moon. The cubs are being hand-reared by SCBI staff.

The cubs' births are significant as they represent a second generation of genetically valuable clouded leopards at SCBI. Ta Moon's birth in March 2009 marked the first time clouded leopard cubs were born at SCBI after 16 years. The breeding of clouded leopards has been a challenge, primarily because of male aggression. These new cubs are the direct result of SCBI's scientific breakthrough in animal care science to introduce males to their mates when they are six months old. This allows the pair to grow up together and reduce the risk of agressive attacks.

The Zoo has been working with clouded leopards at SCBI since 1978, with the goal of creating a genetically diverse population. In the past 30 years, more than 70 clouded leopards have been born at SCBI. The clouded leopards at the Front Royal campus are in need of a new home. They currently live in a facility that was built in 1911. In 2009, the National Zoo kicked off a campaign to raise $2 million to build a new facility. The habitats for each breeding pair will include a climate-controlled and quiet indoor area attached to two 20-foot-tall outdoor towers furnished with climbing structures, which will simulate their natural forest environment. 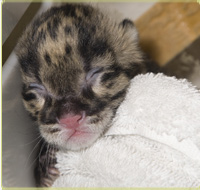