Why We Work with Wild Equids: What is special about Przewalski's Horse? 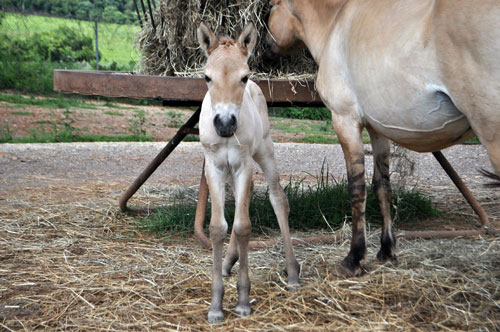 When they hear the word "horse" most people have a distinct mental image of the domestic horse (Equus ferus caballus) we loved as children—who didn’t want a pony as a kid? The domestic horse has become a multi-million dollar industry to some and serves as companion animals to others. We have a vast and intimate understanding of them, from nutrition to reproduction, exercise physiology to social structure and herd dynamics.

However, the domestic horse is not the only equine species in existence. Seven equid species survive today in various regions of the world, but most people only recognize the zebra (there are three species of zebra alone). Few are familiar with other equids including the Persian onager or Somali wild ass or the Khulan. In contrast, the Przewalski’s horse is considered the last wild horse although it is often mistaken for a breed of domestic horse, the Norwegian Fjord.

Despite our extensive knowledge about domestic horses, scientists know relatively little about wild equids. Although we have ideas and comparisons we can make from our experience with E. caballus, we are finding that these are not entirely parallel. Given the changing landscapes and increasing uncertainty of wildlife habitat, we need to understand and uncover all that we can about wild equids to ensure their survival both in the wild and in captivity.

For example, the typical social structure of the horse is a harem, wherein a single stallion leads a group of mares to form a herd. This is our traditional view of a herd of horses. However, the Khulan (Asian wild ass) forms fusion/fission groups, a far more loose social structure that comprises multiple stallions in a herd. The herd is also less stable group, allowing entry and exit of new animals on a regular basis, compared to a typical herd.

Four of the six wild equid species are endangered or critically endangered, thus genetic management is also a crucial part of managing these species successfully in captivity. The concept of insurance populations managed in captivity is extremely important when considering the fragile future of these wild equids.

There is hope, though. Przewalski’s horses were extinct in the wild in 1969, but animals in European zoos were bred to grow the population and were reintroduced in nature reserves in Mongolia in 1993. The Przewalski’s horse also was recently re-classified from critically endangered to endangered. They are one of the success stories of an endangered species. After their extinction in the wild, there were only 14 breeding adults–the entire population is therefore descendants of these 14 animals.

The Przewalski’s horse can breed and give birth to fertile offspring with domestic horses. This is peculiar due to the differing number of chromosomes: domestics have 64 while Przewalski’s have 66 and the hybrid (65 chromosomes) remain fertile unlike the horse and donkey hybrids. As with many of the wild equids, they share many similarities to the domestic horse, but significant differences as well.

Ultimately, the goal of equid research at SCBI is to better understand the fundamental biology of rare and endangered equids and to use this new information to establish self-sustaining populations both in captivity and in the wild.