For the first time, SCBI geneticists have sequenced the genome of a vertebrate: A Hawaiian honeycreeper 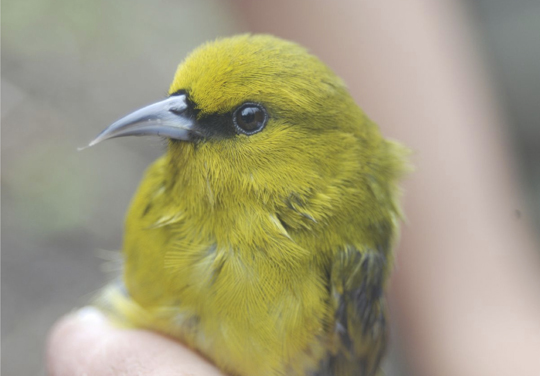 For the first time, conservation geneticists in the Center for Conservation Genomics at SCBI have sequenced the genome of a vertebrate: a Hawaii amakihi, a colorful bird with a hooked beak they use to sip nectar from flowers and pick insects off plants.

Hawaii amakihi are one of more than 50 species (over 30 of which are now extinct) of Hawaiian honeycreeper: a family endemic to Hawaii that vary in color, size, beak shape and ecological niche. A complete amakihi genome will help scientists understand honeycreeper evolution better and will aid conservationists in ensuring survival of this and other, more endangered honeycreeper species.

When scientists first started sequencing genomes, it took more than ten years to sequence the human genome. As equipment has improved and protocols have gotten easier and faster, more genomes have been sequenced.

For a long time, the majority of sequenced genomes were either domestic animals (chickens, turkeys, and cows) or animals used as model organisms in research (zebra finch, fruit flies, rats and nematodes). With the increasing speed, ease, and affordability of sequencing more animals’ genomes are beginning to be sequenced.

Like many of Hawaii’s native species, honeycreepers are in trouble. More than half the remaining species are endangered, and their numbers are declining due to habitat loss, introduced predators, and introduced diseases, including avian malaria. The amakihi is one of the most common honeycreeper species; good numbers of them remain on the islands. 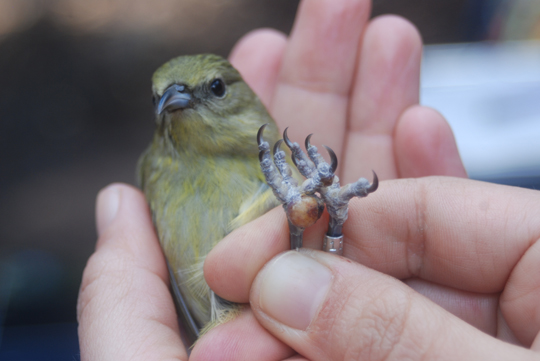 Having a fully sequenced genome for the amakihi is an important tool for conservation: it will help scientists understand the genetics of disease tolerance and how evolution helped shaped this species and others.

While sequencing a genome is easier than it used to be, it still isn’t a simple matter. SCBI conservation geneticists Taylor Callicrate and Rob Fleischer (with help from collaborators at the National Institutes of Health) worked for months, using several different methods, to fully sequence, assemble and study the amakihi genome. And, like all genomes, there are still parts they don’t fully understand.

Sequencing a genome means understanding how the genetic code—the DNA and base pairs that give cells and organisms their identity—fits together. But often times scientists have to make educated guesses using their best available knowledge.

“It’s like a big jigsaw puzzle, only you don’t have the picture on the box,” explains Callicrate. “Even with new technology, it’s hard to get all the pieces in the right order. And there are, literally, a billion pieces.”

There are gaps in all sequenced genomes; the amakihi genome just sequenced will provide an important reference for all future sequenced avian genomes. 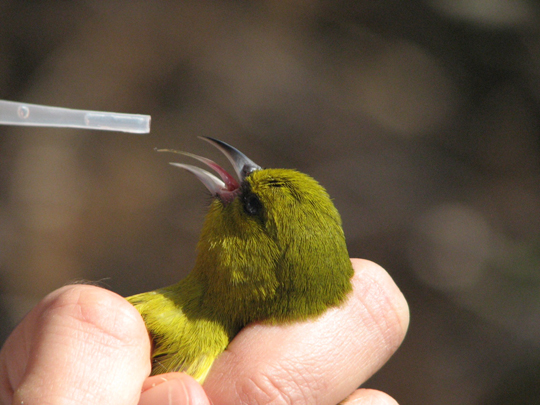 For the study, Rob Fleischer chose an individual who has lived with avian malaria. While this might sound counterintuitive, the fact that she has survived this long indicates that something about her genetics or physiology allows her to tolerate malaria better than other birds might. (And, as a bonus, researchers can get malaria DNA sequences!) Malaria has killed untold thousands of birds. Understanding how it affects them—and potentially how to help birds resist and survive it—is vital to the continued survival of the species.

Fleischer and NZP postdoctoral fellow Loren Sackett are now screening the genomes of more than 140 other individual amakihi, some malaria tolerant and some not, and related species, to search for the genes responsible for malaria tolerance.

Read more about how Smithsonian geneticists are fighting disease invasions