Why is it difficult to breed cheetahs in human care? Smithsonian Conservation Biology Institute (SCBI) scientists addressed that question in a PLOS-ONE paper paper entitled, "Motile Sperm Output by Male Cheetahs (Acinonyx jubatus) Managed Ex Situ Is Influenced by Public Exposure and Number of Care-Givers," published Sept. 2, 2015. Their research is helping scientists increase reproductive success and cub births in human care. SCBI biologist Adrienne Crosier and fellow Diana Koester talk about what their findings mean for the future of cheetahs.

Why is it difficult to breed cheetahs? 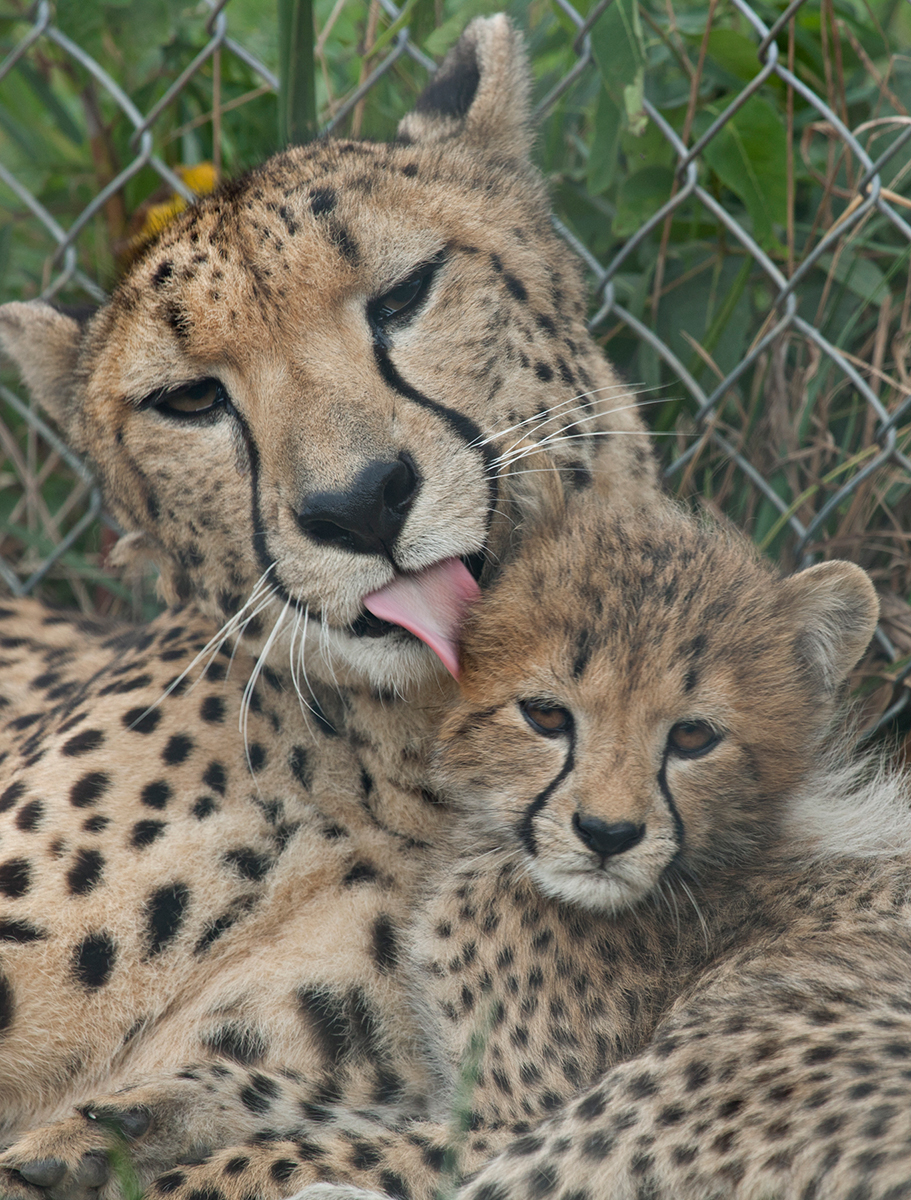 Breeding cheetahs is tricky for a number of reasons. To start, both male and female cheetahs are selective and show individual preferences for mates! When females are interested and ready to breed, they may roll on the ground, rub their body against objects, increase the amount they vocalize or their activity level in general, and they may even exhibit lordosis.

However, female cheetahs undergo periods of time in which they're not ready to breed, hormonally speaking. Sometimes, these periods can be several months long! Even when their bodies are ready to breed, some females don't exhibit the behaviors mentioned above. We call this "silent estrus." It makes it difficult to know exactly when we should introduce males and females for breeding!

Cheetahs are easily distracted or stressed when anything new enters their environment, including people, vehicles, and even other animals. If they're distracted or nervous, they don't always display behaviors that indicate they're ready to breed. Therefore, cheetah reproduction is more successful in off-exhibit facilities where there are fewer distractions and stressors. That's why the Conservation Centers for Species Survival (C2S2) formed the Cheetah Sustainability Program and worked with the Species Survival Plan to implement the "breeding centers model" to help cheetahs feel more secure in their environment and increase reproductive success

How do you tell if sperm is high quality?

After collecting the sperm, Dr. Crosier analyzed the quality of the samples immediately. For cheetahs, there are three characteristics that a "high quality" sample has: a high concentration of sperm, they move forward quickly (70-80% of quick-moving sperm is considered ideal), and the sperm have a normal structure.

Cheetahs tend to produce a high percentage (about 80%) of sperm with an abnormal structure (extra heads or tails, bent tails, small heads, etc.) as well as low concentration. The structural deformities in particular prevent them from fertilizing an egg.

Why are fertility rates higher for males in the wild?

We know surprisingly little about the mating habits and behaviors of wild cheetahs. Therefore, it's difficult to replicate the best circumstances for breeding in human care. Wild cheetahs can choose to interact with or avoid other cheetahs based on subtle scents or behavioral cues that we humans can't perceive.

To closely mimic the social structures that occur in the wild, the only time these cats come together is for breeding, if a mother is with her cubs, or if we are housing a coalition of brothers. At all other times, we have a barrier between cats to ensure that they are safe and comfortable in their own space.

In human care, animal managers make decisions about which cheetahs to put together based on signals we can see. Ultimately, this may mean that males in human care have fewer opportunities to breed than wild males would.

Does the presence of other cheetahs affect fertility?

We didn't find any evidence that high numbers of male or female cheetahs at the same facility affected sperm quality, hormones, or behavior. That's consistent with what we've found in the wild, as well. It doesn't seem to affect reproduction if cats live in high-density ranges (such as the Serengeti) or lower-density ranges (such as southwest Africa).

Why does the number of keepers matter?

We want our cheetahs to feel secure in their space. At SCBI, we spend relatively little time interacting directly with each individual cat. Our main concern is that the cheetahs focus on breeding and not on us!

On average, cheetahs spend only 1-2 hours per week in close proximity (20-30 feet) to animal care staff. These interactions are an important part of building a positive relationship with keepers and establishing a routine. Therefore, it's important to consider the keeper-animal relationship when attempting to breed cheetahs in human care.

The majority of the time that we spend with the cheetahs is training. We train them to voluntarily participate in their own health exams. This includes behaviors like getting on a scale for a routine weighing and standing still for flea/tick medicine application and vaccine injections.

Cheetahs tend to like things to be familiar and consistent. If more keepers are providing care, there is less opportunity for a cheetah to become familiar with a staff member and routine. This may make it difficult for a cheetah to understand what is "normal" or to develop confidence, which is very important for successful reproduction as well as overall health.

Long-term exposure to an "unpredictable" routine may trigger stress in individual cheetahs and, ultimately, reduce their reproductive capacity. 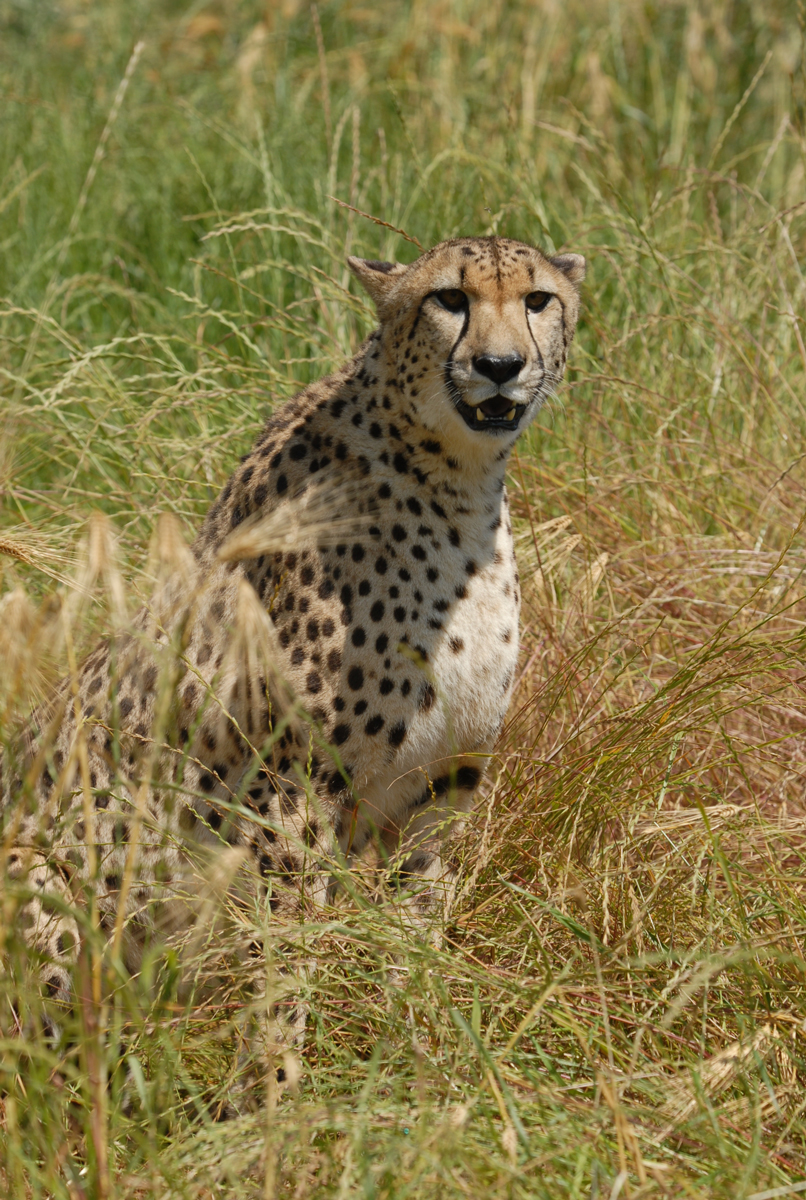 It isn't quite as simple as initiating activity to make their sperm better. Rather, we found that an animal's activity level may indicate its overall health, confidence, and overall well-being to its keepers.

We used a method called "instantaneous sampling" to get an idea of behavioral activity level for each male. To do this, we observed a male and recorded his activity once per minute. Activities included resting, standing, crouching, sitting, walking, and running. At the end of the observation period, we tallied the total amount of time each male spent in active behaviors (like standing, walking, and running) versus inactive behaviors (like resting or sitting).

Enrichment items are important to promote healthy active behaviors. But, for cheetahs, activity level seems to have less to do with enrichment, and more to do with who's around them and their confidence. Some individuals seem to engage and interact with each other through the mesh of their enclosures, while others will hide from their neighbors or avoid them.

At SCBI, we use food items as enrichment (like cow bones and frozen treats made with beef and cow blood). The cats seem to enjoy batting around and chasing large boomer balls in their yards as well. Among their favorite toys is an extra-large kong—they play with them all the time! We are always in need of new enrichment items for all of our animals here at SCBI. You can help support the program by donating to our Enrichment Giving Tree.

At what point will the cheetah population in human care be self-sustaining?

Organizations in the Association of Zoos and Aquariums' Species Survival Plan need a combined total of 35 births per year (or more) over the next several decades. Only then will the population be self-sustaining. Our biggest goals right now are to: (1) increase our breeding population; (2) maintain genetic diversity within the population; and (3) increase the number of cubs born each year.

To maintain genetic diversity, each year, the Species Survival Plan puts potential male and female breeders through a rigorous background check. They must be healthy, sexually mature, and capable of breeding. To ensure a good personality match, keepers detail their cheetahs' social needs as well. They also review a cheetah's entire family history, including all known living and dead relatives. Cheetahs with small family trees have rarer genes than those with lots of relatives. That way, we minimize the likelihood of inbreeding.

What are the next steps?

When the breeding center model was implemented in 2012, genetically valuable cheetah adults were moved from traditional zoos into breeding centers. Most of these centers have minimal visitor exposure, some none at all. Based on our findings, this strategy also should help maintain higher sperm outputs, especially if there is a small, dedicated keeper team to care for the cheetahs.

This story appears in the October 2015 issue of Smithsonian Conservation Biology Institute News. David Wildt, head of the Center for Species Survival, also contributed to the journal publication.

Was this story forwarded to you? Do you want more great science stories in your inbox? Sign up for the e-newsletter here.

Carnivores
An estimated 25 percent of carnivores are in danger of extinction. Smithsonian scientists are working to save them.
Does Group Management of Male Cheetahs Influence Reproductive Fitness?
Scientists are working to save cheetahs by studying how different conditions, such as range and coalition size, impact reproduction.
Investigating AA Amyloidosis Prevalence in Cheetahs
Smithsonian scientists and partners are researching a disease that impacts cheetahs in human care and developing strategies to mitigate its effects.
Physiological Onset of Puberty in Cheetahs
Wildlife conservationists have learned a lot about cheetahs but still lack some important biological data, such as when these animals go through puberty.