One of the biggest questions scientists at the Smithsonian Conservation Biology Institute (SCBI) were working hand-in-hand with their colleagues in China to understand in the late 1990s was: why are pandas 'challenged' at reproducing? Almost a decade later, scientists are still answering questions about giant panda reproduction, but a new generation of scientists are now also contributing to scientific breakthroughs.

It was during the late 1990s while surveying the major panda breeding sites in China that SCBI researchers first met Yan Huang. "We met this eager young investigator who wanted to learn more about improving reproductive health and consistency in giant pandas," says David Wildt, head of SCBI's Center for Species Survival. Wildt and the late Dr. JoGayle Howard began working with Yan.

Under their guidance Yan learned many new methods for improving panda reproductive health and success. They included collecting and freeze-thawing sperm, which are vitally important for artificial inseminations (AIs) and effectively managing pandas. Yan trained at SCBI's campus at the National Zoo in Washington, D.C. and its headquarters in Front Royal, Va., and in China.

Once a student, Yan is now making his own advances in giant panda research. Recently the premier reproduction journal, Biology of Reproduction, published an article about improving reproductive success in pandas. Yan was the lead author of the paper that details how to determine the exact date to perform an artificial insemination. He worked with his Chinese colleagues on his research, and Wildt was a collaborator. Knowing exactly when to perform an artificial insemination on a female giant panda is very important. Female giant pandas come into estrus for 24 to 72 hours each year, which means scientists only have one brief window of opportunity to perform an AI.

Yan tracked reproductive hormones in urine and used DNA paternity analysis to determine the best time to perform an AI on a female panda. He found that the best day to do an AI coincides with the peak day of urinary estrogen production. Based on the DNA paternity analysis, Yan saw that the male whose sperm was used for an AI on the peak day of urinary estrogen production in the female was the father of the female's cub. "So," Wildt explains of Yan's research, "it's all about timing. Doing an AI later in the short estrus is not worthwhile or a good use of frozen sperm.

Yan is now a leader in developing new and novel methods for reintroducing pandas into the wild in Sichuan Province. "Huang Yan is a perfect example of what we are doing at SCBI—creating scientists with multiple skills—working towards training ourselves right out of a job".

One of the National Zoo's goals is to train future generations of conservationists, who will make the next major advances in conservation science. This capacity-building extends across many species, ecosystems and scientific disciplines, and has resulted in powerful collaborations and important studies, including for the iconic giant panda. 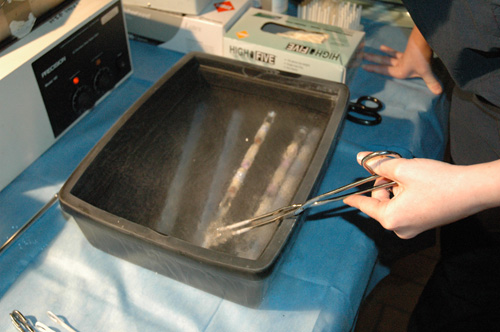