Dr. Copper Aitken-Palmer is the lead veterinarian at the Smithsonian Conservation Biology Institute's Department of Conservation Medicine. In the past few months she and other Zoo scientists have traveled to China for different giant panda conservation initatives. Below she writes about some of their trips.

The past few months have been very busy. In November I traveled to China with Dr. Elizabeth Freeman from George Mason University, thanks to a donation from the Ford Motor Company Fund, for the annual Giant Panda Technical Meeting in Chengdu, China. The Technical meeting is a two-to-four-day meeting that is hosted annually in China. All of the giant panda scientists worldwide go, which is probably around 100 people. During the meeting we participated in discussions with giant panda experts in China on current reintroduction projects, emerging giant panda health concerns, and reproductive studies. Chinese scientists are working exclusively on the reintroduction projects, but it was interesting to hear what they have been doing. Last year one young male panda was introduced into the wild. He was born in captivity, but his mother was born in the wild. That was part of a CWCA (Chinese Wildlife Conservation Administration) project. And one of our very own SCBI scientists, Jon Ballou, talked about giant panda genetics. Each presentation was given in both English and Chinese thanks to the help of translators. My presentation was translated simultaneously into Chinese as I was speaking. In December, the month after the Giant Panda Technical Meeting, David M. Rubenstein Fellow Andrea Lee traveled to China to present the preliminary results of the giant panda parasite study conducted with Chinese veterinary experts in giant panda health. This study was conducted during the fall of 2012 at Bifengxia Giant Panda Center (CWCA). Round worms are the biggest problem we have found, but we will continue to conduct parasite studies for the next five years. Additionally, she continued collecting red panda health data working with veterinarians at the Chengdu Research Base of Giant Panda Breeding.

Last month Kendall Bilbrey, a graduate of the Smithsonian-Mason School of Conservation, joined the SCBI team to continue data collection for the Ford Motor Company Fund's Giant Panda Comparative Medicine and Disease Susceptibility Initiative. This is a long-term collaborative effort between CWCA, SCBI's Department of Conservation Medicine and George Mason University to learn more about health and disease of the giant panda.

Finally, this month I started working with Andrea Lee, a veterinary biotechnologist, and Kendall Bilbrey in preparation for a trip to China in March. This trip will be part of the Ford Motor Company Fund's Giant Panda Comparative Medicine and Disease Susceptibility Initiative. We'll keep you updated on our research in the coming months! 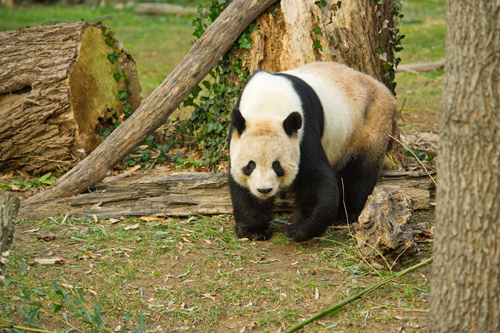